US Vaccinations: As of 5/9/2021 259.7 million finally after days of dropping a slight rise to 2.02 million per day in the last week sounds impressive but if the rate does not increase it will take us now increased to some 4 months to have 75% of the population vaccinated which many believe is necessary to develop herd immunity. In California 33,109,680 total doses have been given (78.8% of doses received slightly more than the U.S. average of 78.7%), but even with the pressure of a recall to be scheduled this fall which hopefully end Newsom’s term, California has not moved from 26th  out of the 50 states in terms of the percentage of doses administered as a percentage of doses delivered to the states and at 34.9% of its population fully vaccinated compared to the U.S. average of 34.3% has moved down from 23rd tied with  Oregon and Montana to 24th tied with Kansas among the 50 states.  A long way to go to get herd immunity in terms of getting vaccines received into arms and the percentage of the population fully vaccinated compared to other states which means a great reason to recall this inept and hypocritical governor.
Non CV News: Hell hath no fury that the Woke left trying to remake the culture and traditions of this great nation as their latest push on Mothers’ Day is to replace “mom” and “mother” with “birthing people”; Epstein may be dead whether murdered as some believe to prevent disclosure of the identities of the powerful on his Lolita Island or committed suicide but his legacy is still casting shadows as talk of Melinda Gates being upset with Bill’s association with him since 2014 has surfaced (like all divorces that start out with amicable intentions do not be surprised if the family law piranha smell blood and turn it into a bloodbath; Chuck Todd had Flip Flop Fauci on “Meet the Press” but his role as a “journalist” looks like he suppressed he asked not a single question about U.S. taxpayer funding of the Wuhan Lab by the National Institute of Allergies and Infectious Diseases where he has been a director since 1984 (a good hint as to why Fauci never claimed the CV was released by the lab?); the Sport of Kings practiced at the Kentucky Derby may be the Sport of Drug Cheaters as Medina Spirit, the winner, may be disqualified for failing a drug test and his trainer Baffert has been suspended (Medina Spirit the 5th horse trained by him to fail a drug test this year); the Chinese once again thumbed their nose at the world for what NASA fumes at as being irresponsible behavior for allowing its rocket to make an uncontrolled descent and break up with pieces hitting Earth, fortunately in the waters of the Indian Ocean near the Maldives and not injuring people or property; NPR funded by taxpayer money has admitted the obvious that Big Tech has the ability to influence our elections and Twitter has shut down Trump’s new platform.
Cuomo’s idiocy is beyond belief or his above the law ego is off the charts as while 84% of New York nursing home residents are vaccinated, only 58% of their staff are (given the deadly nature of CV to the elderly in nursing homes, no one should be allowed to work there without having been vaccinated); as Where’s Waldo continues to avoid the border like the plague, the sheriff of Texas Jackson County is blasting the Biden Administration for diverting scarce Border Patrol and National Guard to pick up the illegals’ mounds of discarded filth and trash (they can treat their own countries like a trash heap but time to show some hygiene habits here); just when you thought DeBlasio had run out of idiotic things do, his Administration allowed a parade of pot smokers to parade celebrating the use of cannabis and banned a parade of veterans to commemorate the 102nd Memorial Day Parade on Staten Island.; the Colonial Pipeline Shutdown due to a ransomware  attack by a criminal organization called the Darkside is now in its third day (these terrorists are a threat to our national security and deserve the death penalty on an expedited basis if caught and convicted).
Wonder if BLM will be getting into Maxine Waters’ face if Chauvin gets a new trial as a political cartoonist points out the consequences of her acts: 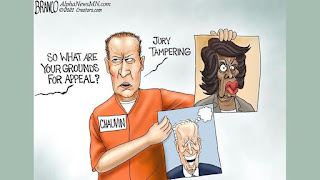 Chicago Gun Violence: Hey Jackass.com is back to show that through May 8, 2021, gun violence involving mostly persons of color shooting mostly persons of color in Chicago is alive and well with 1138 persons shot of whom 200 have died.
As always, I hope you enjoy today’s holidays and observances, factoids of interest for this day in history, a video musical link to “Wishing Well” by Terrence Trent D’Arby, the fact that you are not renitent to new products and ideas and a quote from Charles Colson on Watergate,  secure in the knowledge that if you want to send a gift for any memorable events like Mother’s Day, college graduations, birthdays, weddings, or anniversaries, you know that the Alaskanpoet can provide you with a unique customized poem at a great price tailored to the event and the recipient. Please contact me for details on the pricing.
1. Mother’s Day—the first Mother’s Day was celebrated in Boston in 1872 but the push to make it a national observance was started by Anna Marie Jarvis who held a private ceremony on the anniversary of her mother’s death in 1907 to honor her and mothers everywhere which blossomed into a national movement until President Wilson in 1914 designated the 2nd Sunday in May which quickly became the commercial success in terms of gifts like flowers, perfumes,  candies, jewelry and brunches it is today.
2. Mother’s at the Wall Day—honoring those mothers on Mother’s Day who have lost a child while serving in the military during our wars.
3.  1988 Number 1 Song USA—the number 1 song in 1988 was “Wishing Well” by Terrence Trent D’Arby on a run of 1 week in that position to join 29 other songs reaching number 1 and 16 other acts who achieved their first number 1 status. Here is a video recording by Terrence Trent D’Arby of “(Wishing Well”: https://www.youtube.com/watch?v=ynIHsHYaig0 D’Arby a singer songwriter and performer since 1984 changed his name to Sananda Maitreya on October 4, 2001 and is still going strong at 59 today.
4.  Word of the Day—the word of the day is “renitent” which means recalcitrant which as the world changes at light speed is not a trait for new ideas or products to have.            5.  Dipping to Death—celebrating the birth on this day in 1960 of San Diego MLB player Tony Gwynn who played for the Padres for 20 years, winning 8 National League Batting Average Titles and barely missed one season at .400 but sadly could not break free of dipping chewing tobacco and died of salivary gland cancer on June 16, 2014 at age 54.              On this day in
a. 1941 the Royal Navy captured the German submarine U-110 before it could be scuttled and retrieved an Enigma machine which would later be used to break the German codes to the Kriegsmarine and Wehrmacht to the Ally’s great advantage in determining German war intentions.
b. 1960 in a let the good times roll moment the FDA announced it would approve Searle’s Enovid as the first oral female contraceptive.
c. 1961 FCC Chairman Newton Minnow blasted TV programming in his TV Wasteland Speech.
d. 1974 the House Judiciary Committee opened formal hearings on the impeachment of President Nixon.
e. 1980 5 masked heavily armed gunmen tried to rob a Security Pacific Bank in Norco, California which resulted in a massive shootout and car chase that destroyed 33 civilian and police cars that ended with 2 dead gunmen and 1 dead deputy and 3 arrested gunmen wounded and who were convicted and are now serving life sentences without possibility of parole and police forces up gunning their forces after being totally outgunned by the 5 gunmen in the Norco shootout.
Reflections on Watergate:  “I learned one thing in Watergate: I was well-intentioned but rationalized illegal behavior. You cannot live your life other than walking in the truth. Your means are as important as your ends.” Charles Colson, one of the Watergate conspirators who plead to a 7 month prison term. Watching the left, it is clear they have not adopted Colson’s advice on means versus ends.
Please enjoy the poems on events of interest on my twitter   account below (if you like them, retweet, and follow me) and follow my blogs. Always good, incisive and entertaining poems on my blogs—click on the links below. Go to www.alaskanpoet.blogspot.com for Ridley’s Believe It Or Not—This Day in History,  poems to inspire, touch, emote, elate and enjoy and poems on breaking news items of importance or go to  Ridley's Believe It Or Not for just This Day in History.

© May 9, 2021 Michael P. Ridley aka The Alaskanpoet
Alaskanpoet for Hire, Poems to Admire
Poet Extraordinaire, Beyond Compare
A Unique Gift, All Recipients a Lasting Gift

Posted by Michael P. Ridley aka the Alaskanpoet at 9:45 PM