US Vaccinations: As of 5/23/21 285.7 million doses and a day down to 1.83 million per day from yesterday’s 1.88 million on per day in the last week sounds impressive but if the rate does not increase it will take us now back to some 3 months to have 75% of the population vaccinated which many believe is necessary to develop herd immunity. In California 37,048,042 total doses have been given (80.2% of doses received to trail the U.S. average of 80.0%), but even with the pressure of a recall to be scheduled this fall which hopefully end Newsom’s term, California has not moved from  25th out of the 50 states in terms of the percentage of doses administered as a percentage of doses delivered to the states and at 41.3% of its population fully vaccinated compared to the U.S. average of 39.2% has moved up  from  24th tied with Delaware to 21st among the 50 states.  A long way to go to get herd immunity in terms of getting vaccines received into arms and the percentage of the population fully vaccinated compared to other states which means a great reason to recall this inept and hypocritical governor.
Non  CV News: Even as St. Louis is leading the nation in its murder per capita rate and the worst in 50 years, its new Blue black female “progressive criminal justice reform mayor Tishura Jones has jumped on the defund the police bandwagon at a time when the city cannot fill vacancies in the police department and Kansas City, Missouri is aping St. Louis cutting $40 million from the police budget (with COVID-19 restrictions lifted watch out for escalating crime during summer and real riot potential if any shootings of blacks, armed or unarmed by police occur); Fauci the Flip Flopper now seems to believe that the COVID-19 virus may have been developed in the Wuhan lab that Sen. Paul is accusing the National Institute of Allergic and Infectious Diseases headed by Fauci of having engaged to do viral research; Cruz attacked the Army recruiting video attracting the LGBT community compared to a Russian recruiting video and was attacked by leftist MSNBC hack Brian Williams as being a Russian propagandist; South Korea racks pretty low on the totem pole in terms of CV cases and deaths so it was amazing to see Where’s Waldo aping Howard Hughes by wiping her hand on her clothes after shaking the hand of South Korea’s President in her role as the 25th Amendment President in waiting; while Garcetti is bemoaning the absence of patrons at large vaccination sites in L.A. leave it to Nevada to show the way as a Law Vegas strip club Larry Flynt’s Hustler Club is offering vaccinations to strippers and patrons and the inducement to patrons showing proof of vaccinations is among other things a free lap dance (sure trumps a Starbucks card); the Dark Continent has become light at least near Goma, a city of 2 million in the Congo, as the volcano Mt. Nyiragongo has erupted with a lava flow that has caused panic and the evacuation of 500 homes due to the memory of an eruption in 2002 that left hundreds dead.
Obama is not getting any glowing remarks viz-a-viz his being the head of the Blues in a new book coming out soon: Battle for the Soul: Inside the Democrats’ Campaign to Defeat Trump by Edward Isaac Dovere pointing under his 8 year leadership “the Blues had net losses of 947 state legislative seats, 63 House seats, 11 senators, and 13 governors; as Blues continue to mouth the mantra “follow the science”, if under the guise of peaceful protest in Texas, be prepared to be arrested as Governor Abbot has just signed legislation banning blocking roads for traffic and emergency vehicles; Terry Tyler wanted for 4 murders and 5 attempted murders and who escaped a police chase on Monday and fleeing the scene after crashing his car and leaving his girlfriend to be arrested may soon be in cuffs or shot dead in a shootout; Phil Mickelson won his 6th Major Golf Tournament the PGA by 2 strokes to become at a few days shy of 51 the oldest player to win a Major; Red states like Texas are shedding mask mandates and reporting 0 deaths, and vaccinations rise and the evidence of almost 0 risk of COVID-19 transmission in schools remains unchallenged, leave it to the political cartoonist to point out the absurdity of requiring school children to wear masks and capture the venom of the teachers’ unions on the issue of opening schools and mask requirements: 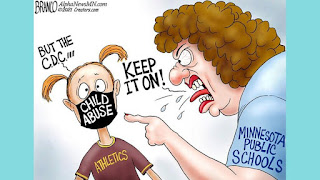 Chicago Gun Violence: Hey Jackass.com is back to show that through May 22, 2021,  gun violence involving mostly persons of color shooting mostly persons of color in Chicago is alive and well with 1346 persons shot of whom 236 have died.
As always, I hope you enjoy today’s holidays and observances, factoids of interest for this day in history, a video musical link to “All For You” by Janet Jackson, the fact that you enjoy in assessing character being rhadamanthine but fair and a quote from Susanna Moore on endangered species including turtles, secure in the knowledge that if you want to send a gift for any memorable events like Father’s Day, college graduations, birthdays, weddings, or anniversaries, you know that the Alaskanpoet can provide you with a unique customized poem at a great price tailored to the event and the recipient. Please contact me for details on the pricing.
1. World Turtle Day—created by American Tortoise Rescue in 2000 to promote awareness about tortoises and turtles who have been on this planet for millions of years and to promote conservation efforts to preserve their habitat and ensure their survival, especially the Kemp Ridley and the Olive Ridley Turtles both of which are endangered.
2. International Day to End Obstetric Fistula—creating awareness of a birth defect in women born with a hole between the birth canal and bladder and/or rectum.
3.  2001 Number 1 Song USA—the number 1 song in 2001 was “All For You” by Janet Jackson on a run of 7 weeks in that position to join 14 other songs reaching number 1 as 10 acts were achieving their first number 1 song. Here is a video recording by Janet Jackson moving, grooving and singing “All For You”: https://www.youtube.com/watch?v=LsllxyEvWXA
4.  Word of the Day—the word of the day is “rhadamanthine” which means a stern judge  and if a defendant probably not the judge you want to be before.
5.  Dunked When Drunk—celebrating the birth on this day in 1979 of 14  season veteran in the NBA, Rasual Butler who  going for 15 was signed by the Timberwolves but waived after 5 preseason games and tried to extend his career playing in the BIG3 which he did in 2017 but on January 31, 2018 driving his Range Rover at 2-3 times the speed limit on Ventura Boulevard in Studio City with his girlfriend singer Leah LaBelle he lost control and crashed killing both of them with Butler having a BAT .118 and LaBelle  a BAT.114 with both having traces of illegal drugs in their systems.
On this day in
a. 1900 in a what took you so long moment Sargent William Carney, a black American serving with the 54th Massachusetts was awarded the Medal of Honor for his heroism of recovering and returning to the Union forces the American flag fallen in  the Battle of Fort Wagner memorialized in the movie Glory.
b.  1911 the New York Public Library was dedicated.
c.  1995 Java Programming language was first introduced.
d. 2014 Elliot Rodger, an angry young man over being rejected by women and jealous over other men successful in sexual relationships, killed three men in his apartment, drove to the Alpha Phi sorority house at UC Santa Barbara and shot and killed 2 female students and wounded a third, then went on a driving and shooting spree in Santa Barbara, killing 1 man in a delicatessen, and injuring 6 by bullets and 7 with his car. When police cornered him, they found him dead of a self-inflicted gunshot wound.
e. 2021 a cable car with 15 passengers near Lake Maggiore in Northern Italy had a cable break hurling the cable car down the mountain and killing 14 passengers and injuring 1 child who is in a hospital in serious condition.
Reflections on the endangered status of marine turtles: On its 2015 list, the Fish and Wildlife Service included the 'ea, or hawksbill turtle, as well as the green turtle, Ridley sea turtle, leatherback turtle and loggerhead turtle. Four mammals are considered endangered: the Hawaiian hoary bat; the kohola, or humpback whale; the sperm whale; and the endemic Hawaiian monk seal.” Susanna Moore, American writer and teacher and obviously a proponent of World Turtle Day.

© May 23, 2021 Michael P. Ridley aka The Alaskanpoet
Alaskanpoet for Hire, Poems to Admire
Poet Extraordinaire, Beyond Compare
A Unique Gift, All Recipients a Lasting Gift