May 22, 2021 Ridley's Believe It Or Not Canadian Immigrants Day

Guatemala:  Activecases:     12,165     438Deaths/M
Honduras:     Activecases:   141,921     611Deaths/M
El Salvador:   Active cases:     2,499     339 Deaths/M
US Vaccinations: As of 5/22/2021 283.9 million doses and a day of daily stuck at 1.88 million on per day in the last week sounds impressive but if the rate does not increase it will take us now back to some 4 months to have 75% of the population vaccinated which many believe is necessary to develop herd immunity. In California 36,714,358 total doses have been given (79.4% of doses received to trail the U.S. average of 79.5%), but even with the pressure of a recall to be scheduled this fall which hopefully end Newsom’s term, California has  moved from  29th up  down to 25th out of the 50 states in terms of the percentage of doses administered as a percentage of doses delivered to the states and at 40.7% of its population fully vaccinated compared to the U.S. average of 38.9% has moved up  from  24th tied with Delaware to 23rd among the 50 states.  A long way to go to get herd immunity in terms of getting vaccines received into arms and the percentage of the population fully vaccinated compared to other states which means a great reason to recall this inept and hypocritical governor.
Non  CV News: The cease fire between Hamas and Israel, that Biden had nothing to do with despite his hollow brags, appears to be holding hopefully not for the reason that Hamas may be out of rockets but there is no cease fire in anti-Semitism here in the U.S. as pro-Palestinian protestors, probably emboldened the over the top rhetoric of Illan Omar demanding Israel be charged with war crimes are raging across the nation; Monica Lewinsky won the Twitter response prize of the decade when in answer to a Twitter question of her highest risk lowest reward moment she posted only an emoji of two rolled eyes; Where’s Waldo is still MIA on the border, doing everything she can to appear relevant and president by 25th Amendment in waiting as she had time to attended a Clinton Foundation event on empowering women with Bill (wonder how empowered Monica Lewinsky feels given her involvement with this reptilian brain driven sexual predator?); hopefully the outrages directed by parents against the Palm Beach School Board for their CRT and Project 19 agenda to judge whites by the color of their skin spreads as the push for “equality” is a push to end meritocracy; we may never learn what Where’s Waldo’s plans are to curtail the wave of illegal immigration but from Biden a hint as the DHS is busy expanding shelters for illegal unaccompanied minors so no more photos of crowded facilities at the border as still more illegals are released into the country; 4300 Notre Dame students signed a petition objecting to Catholic President Joe Biden addressing commencement due to his stand on abortion and he has withdrawn his acceptance; any illusions that teachers unions care about the kids they teach was dashed when Randi Weingarten, the head of the American Federation of Teachers that has held our schoolchildren hostage over CVOVID-19 was ranting on social media that her teacher members are tired from on line teaching; an AP news staffer on the job for only 17 days has learned the lesson that one should be careful when tweeting as she was fired when pro-Palestinian biased tweets were discovered;  a blockchain analytics firm, Elliptic, has revealed that the DarkSide has  received $17 million in ransomware extortions since March.
Mayor Lightfoot of Chicago smarting under racist allegations as she refuses to give any interviews to any reporters who are white has picked up a well-deserved no confidence vote from the Chicago Police Department; in an example of judicial independence, District Court Judge Roseanne Ketchmark, a Republican but appointed by Obama, has denied College of the Ozarks’ request for a temporary restraining order against Biden’s executive order that would require this Christian college from having to house biological males who identify as females in female dormitories;  as vaccinations rise and infections and death rates fall, leave it to the political cartoonist to point out the absurdity of requiring fully fully vaccinated people being required to wear masks indoors or outdoors: 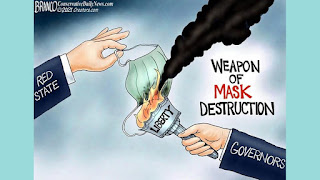 Chicago Gun Violence: Hey Jackass.com is back to show that through May 21, 2021, gun violence involving mostly persons of color shooting mostly persons of color in Chicago is alive and well with 1327 persons shot of whom 231 have died.
As usual, I hope you enjoy today’s holidays and observances, factoids of interest for this day in history, a video musical link to “Marie, Marie” by Santana feat. The Product G&B by Ricky Martin, the fact that you enjoy the brick reveted as decorations and a quote from Colin Powell on the importance of our Merchant Marine, secure in the knowledge that if you want to send a gift for any memorable events like Father’s Day, college graduations, birthdays, weddings, or anniversaries, you know that the Alaskanpoet can provide you with a unique customized poem at a great price tailored to the event and the recipient. Please contact me for details on the pricing.
1. U.S. National Maritime Day—created by the U.S. Congress on May 20, 1933 to honor the contributions and importance of our maritime industry and celebrated on the 22nd of May which is the anniversary of this day in 1819 that the USS Savannah, the world’s first ocean going steamboat, left Savannah, Georgia bound with for Liverpool, England with no passengers and very little cargo powered by sail and a steam engine to power side paddle wheels which were used only 10 percent of the time in the 29 day voyage.
2. Canadian Immigrants Day—celebrating the contributions to our culture, economy, sports and society of those Canadians, including my mother, a nurse par excellence, and her siblings who migrated here during and after World War II.
3.  2000 Number 1 Song USA—the number 1 song in 2000 was “Marie, Marie” by Santana feat. The Product G&B on a run of 10 weeks in that position to join 17 other songs reaching number 1 and 9 other acts that achieved their first number 1 song. Here is a video recording by Santana feat The Product G&B of “Marie, Marie”: https://www.youtube.com/watch?v=nPLV7lGbmT4
4.  Word of the Day—the word of the day is “revet” which means to face with masonry which unless tied down has a bad tendency to shear off walls during an earthquake.
5.  Bipolar Is No Laughing Matter Even for a Comic—celebrating the birth on this day in 1970 of noted comic and podcaster Brody Stevens who had been diagnosed with bipolar disease in 2010 and after years of medication had stopped and then shortly after restarting his medications, hanged himself on February 22, 2019.
On this day in
a. 1900 The Associated Press was founded in New York City.
b. 1964 President Lyndon Baines Johnson announced The Great Society
c.  1967 Egypt, in a move that would result in the Six Day Way that started on June 5, 1967, closed the Straits of Tiran to Israeli shipping.
d. 1985 Salman Abedi, a Libyan born in England, with a suicide bomb in a ruck sack and spotted by a suspicious girl who was fearful of being branded a racist, walked past her and minutes later as fans were leaving an Ariane Grande concert at Manchester Arena, punched his one-way ticket to Paradise killing himself and taking 22 innocents with him while injuring some 800 people.
e. 2017 President Donald Trump visited in Jerusalem the Church of the Holy Sepulchre and the Wailing Wall, the first sitting president to do so.
Reflections on the Merchant Marine Service: “Since I became Chairman of the Joint Chiefs of Staff, I have come to appreciate first-hand why our Merchant Marine has long been called our Nation’s fourth arm of defense. The American seafarer provides an essential service to the well-being of the nation as was demonstrated so clearly during Operation Desert Shield and Desert Storm…We are a maritime nation. We must be able to project power across the seas.” General Colin Powell