US Vaccinations: As of 5/209/2021 279.4 million doses and finally a second day of daily increases in doses from 1.8 to 1.83 million on per day in the last week sounds impressive but if the rate does not increase it will take us now back to some 4 months to have 75% of the population vaccinated which many believe is necessary to develop herd immunity. In California 36,053,888 total doses have been given (79.0% of doses received to trail the U.S. average of 79.4%), but even with the pressure of a recall to be scheduled this fall which hopefully end Newsom’s term, California has  moved from  27th down to 28th out of the 50 states in terms of the percentage of doses administered as a percentage of doses delivered to the states and at 39.8% of its population fully vaccinated compared to the U.S. average of 38.1% has  not moved 22nd  among the 50 states.  A long way to go to get herd immunity in terms of getting vaccines received into arms and the percentage of the population fully vaccinated compared to other states which means a great reason to recall this inept and hypocritical governor.
Non  CV News: Israel and Hamas have agreed to a ceasefire after the Hamas rocket count of rockets launched into Israel is over 4,000 while Biden who did not broker the ceasefire is trying to take credit (what a failing mental wimp); at a time when the more dollars we send to Israel to expand Iron Dome the less likely Hamas will be launching missiles that will be destroyed, in a move that has to embolden Hamas to launch more rockets the dynamic duo of bias and anti-Semitism AOC and Tlaib have introduced a resolution calling for a disapproval of an arms sale to Israel; Jewish patrons at a Beverly Glen sushi restaurant were attacked by a mob of Palestinian supporters (expected fallout from the anti-Semitic rants of Rashida Tlaib?); we are witnessing another example that “bipartisan commission” means only the Blue can appoint the staff and control the agenda as the House has created a “bipartisan” commission to investigate the January 6 protests at the Capitol and has sent the bill to the Senate where it faces strong opposition; some sense of sanity may be appearing among Blues, as Biden’s plan to raise capital gains tax to 39.6% and eliminate the step up in basis on death to donees is facing headwinds in his party; Peloton has announced a software fix to its treadmill to shut it down when the exercise equipment is inactive that would have prevented the death of a small child sucked under the moving treadmill with no one on it; as more and more evidence is surfacing that the COVID-19 came out of the Wuhan Lab, the White House has gone silent and is not producing any evidence to contradict the allegations: Ryun King, a tattoo artist at the Gallery X Art Collective in Murrey, Kentucky, is doing his part to lower the hate and divisiveness in this country by offering one day a week to cover up any racist or hateful tattoos for free (kudos to him!); in what some might call what took you so long moment, the IRS has announced that cryptocurrency transactions over $10,000 must be reported; Sanders, perhaps prodded by AOC’s and Tlaib’s  resolution to ban arms sales to Israel, has introduced a resolution to have a vote on a $735 million sale of arms to Israel to be held on the Senate floor; Cuomo desperate to shift attention away from his scandals has unveiled an inducement to be vaccinated—a free $5 million lottery ticket; the Iowa governor fed up with the control freaks at the CDC and in the Swamp, has signed a billing banning mask mandates in schools.
As Israel is trying to defend itself from Hamas rocket attacks now in excess of 4,000, leave it to the political cartoonist to reveal the bias of the Progressives and the DNC lackeys, the MSM, in favor of the Palestinians and against Israel as  the rockets from Hamas rain down: 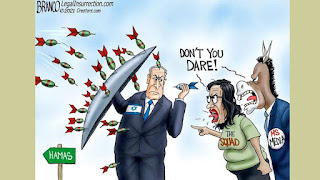 Chicago Gun Violence: Hey Jackass.com is back to show that through May 19, 2021,  gun violence involving mostly persons of color shooting mostly persons of color in Chicago is alive and well with 1280 persons shot of whom 221 have died.
As always, I hope you enjoy today’s holidays and observances, factoids of interest for this day in history, a video musical link to “Livin’ La Vida Loca“ by Ricky Martin, the fact that you support our opposition to revanche by Putin  and a quote from Elie Wiesel on Auschwitz, secure in the knowledge that if you want to send a gift for any memorable events like Father’s Day, college graduations, birthdays, weddings, or anniversaries, you know that the Alaskanpoet can provide you with a unique customized poem at a great price tailored to the event and the recipient. Please contact me for details on the pricing.
1. World Bee Day—created by the United Nations in December 2017 to acknowledge the importance of bees and other pollinators to our ecosystem and food supply and celebrated on this day because it is the anniversary of one of the great beekeepers, Anton Janša born in 1734 who became a pioneer in apiculture and the study of bees.
2. National Rescue Dog Day—created to promote awareness of the large numbers of dogs in shelters that need to be adopted by Lisa Wiehebrink of Tails That Teach that teaches children how to be kind to pets and celebrated since this day in 2018 and celebrated by adopting a dog from a shelter, volunteering or contributing to a shelter, and spaying or neutering your dogs.
3.  1999 Number 1 Song USA—the number 1 song in 1999 was “Livin’ La Vida Loca” by Ricky Martin on a run of 5 weeks non continuous in that position to join 14 other songs reaching number 1 and 10 other acts that achieved their first number 1 song. Here is a video recording by Ricky Martin of “Livin’ La Vida Loca”: https://www.youtube.com/watch?v=p47fEXGabaY Ricky Martin is a Puerto Rican singer who started performing at age 12 and after selling 70 million records is known as the “King of Latin Pop.”
4.  Word of the Day—the word of the day is “revanche” which means a policy designed to recover territory which fits Putin to a tee in terms of his goals.
5.  The Goddess of Pop—celebrating the birth on this day in 1946 of the singer and actress Cherilyn Sarkisian known as the “Goddess of Pop” and to her fans better known as Cher and still performing and going strong.
On this day in
a. 1940 the first prisoners arrived at Auschwitz in Poland, later to be joined by some 1.1 million who would follow and be gassed and cremated as part of Hitler’s “Final Solution.”
b. 1941 German Paratroopers, who were later supplemented by glider troops, successfully invaded the island of Crete but suffered large numbers of casualties that resulted in Hitler never using paratroopers in an airborne invasion again which meant that Malta was never invaded from the air and Rommel ended up having so many of his supplies sunk by plane and submarines operating out of Malta that he lost the Battle of El Alamein.          c. 1983 the first publication of the existence of the HIV Virus that causes AIDS was published in Science by Luc Montagnier.
d. 1985 Radio Marti began radio broadcasting to Cuba and is still broadcasting and televising today.
e. 1996 SCOTUS in the case of Romer v. Evans struck down a Colorado law that banned any city, county or town from taking any legislative, judicial or executive action to prevent discrimination against gays or lesbians.
Reflections on the barbarity of Auschwitz: “At the time of the liberation of the camps, I remember, we were convinced that after Auschwitz there would be no more wars, no more racism, no more hatred, no more anti-Semitism. We were wrong. This produced a feeling close to despair. For if Auschwitz could not cure mankind of racism, was there any chance of success ever? The fact is, the world has learned nothing. Otherwise, how is one to comprehend the atrocities committed in Cambodia, Rwanda, Bosnia…”― Elie Wiesel, Open Heart When the Holocaust is part of your history it is easy to understand why Israel reacts to the barbarity of Hamas with overwhelming force.

© May 20, 2021 Michael P. Ridley aka The Alaskanpoet
Alaskanpoet for Hire, Poems to Admire
Poet Extraordinaire, Beyond Compare
A Unique Gift, All Recipients a Lasting Gift

Posted by Michael P. Ridley aka the Alaskanpoet at 7:09 PM