May 12, 2021 Ridley's Believe It Or Not National Limerick Day

US Vaccinations: As of 5/12/2021 263.1 million doses and finally after days of dropping a third day of increases to 2.20 million per day in the last week sounds impressive but if the rate does not increase it will take us now decreased to some 3 months to have 75% of the population vaccinated which many believe is necessary to develop herd immunity. In California 33,632,769 total doses have been given (78.2% of doses received now less than the U.S. average of 78.8%), but even with the pressure of a recall to be scheduled this fall which hopefully end Newsom’s term, California has moved down from 25th tied with Illinois to 27th tied with Indiana out of the 50 states in terms of the percentage of doses administered as a percentage of doses delivered to the states and at 35.8% of its population fully vaccinated compared to the U.S. average of 35.1% has moved slight up  from 26th  to 25th among the 50 states.  A long way to go to get herd immunity in terms of getting vaccines received into arms and the percentage of the population fully vaccinated compared to other states which means a great reason to recall this inept and hypocritical governor.
Non CV News: The Reds said “By By” to Liz Cheney  in her leadership position     and now watch the MSM go into a lather touting the split in the Republican Party speculating how divisive Cheney will be and what she will do to oppose Trump supported candidates (by so doing they will carry water for the Blues anxious to downplay the growing takeover of the Blues by the likes of AOC and the Squad); Colonial Pipeline is back in business just in time as service stations were running out of fuel in the areas it served as very long lines were the order of the day and tempers fraying (in a why didn’t we do this earlier it seems that Colonial has been seeking a cyber security manager for two months and has not filled the position); even more frightening is that some chatter indicating that the “DarkSide” emboldened by their crippling of Colonial views that attack as only the tip of the iceberg; Biden once again reveals to the press howling questions at him today after a meeting between him and Where’s Waldo and Republican leaders, that he is not supposed to answer questions from the press leading us to wonder when this puppet will reveal who is pulling his strings (my guess its Pelosi, Sanders, Warren and Schumer with a lot of noise from the Squad—God help us); the Oklahoma City School Board unanimously objected to Oklahoma’s law that bans the teaching of critical race theory with its commands that whites should feel guilt over past acts of his or her race and the meritocracy  or hard work ethics are racist (do not be surprised if this gang of 8 is recalled or at least booted out in their next election); Hamas is launching rockets from Gaza left and right into Jerusalem forcing Israelis to hunker down in bomb shelters while Israeli jets bomb suspected launch sites and too many on the left are on anti-Semite condemnations; the George Floyd death to Minneapolis is the gift that keeps on giving  as after a wrongful death settlement payment to his family of $28 million, the city is now shelling out $35 million in workers’ comp claims to the 200 or so officers who retired from the force due to riot caused injury and PTS.
After the viral photos of the two nonagenarian Carters and the Bidens  made  the rounds with the Carters looking like white pygmies and the Bidens like Giants, leave it to the political cartoonist put comparison of the two presidencies in terms of historical rating in the proper perspective: 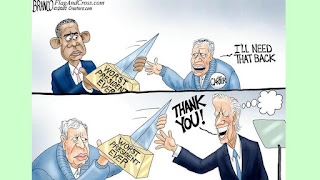 Chicago Gun Violence: Hey Jackass.com is back to show that through May 11, 2021,  gun violence involving mostly persons of color shooting mostly persons of color in Chicago is alive and well with 1160 persons shot of whom 203 have died.
As always, I hope you enjoy today’s holidays and observances, factoids of interest for this day in history, a video musical link to “Joyride” by Roxette , the fact that you are ready, willing and able to repugn what you hear coming from the left and a quote from Bernie Morris on limericks to go with an original one by the Alaskanpoet created on this National Limerick Day,  secure in the knowledge that if you want to send a gift for any memorable events like Father’s Day, college graduations, birthdays, weddings, or anniversaries, you know that the Alaskanpoet can provide you with a unique customized poem at a great price tailored to the event and the recipient. Please contact me for details on the pricing.
1. National Limerick Day—celebrating that 5 lined poem with the aa/bb/a rhyme scheme and often humorous and ribald to first appear in 1820 and celebrated on this day as it is the anniversary of the birth of Edward Lear, noted limerick poet and artist, in 1812:
There once was a man named Joe Biden
Who did not campaign in person but stayed in hidin’
At 78 turning 79 this fall, memory and stamina is fading fast
With his VP chomping at the bit knowing he may not last
Dementia is a terrible way to as his gap from reality widens
© May 12, 2021 The Alaskanpoet
2. National Donate One Day of Wages to Charity—celebrated on the second Wednesday of May as a one time and painless way to donate to your favorite whose recipients of its largesse given the pandemic could more than ever need its donations.
3.  1991 Number 1 Song USA—the number 1 song in 1991 was “Joyride” by Roxette on a run of 1 week in that position to join 24 other songs reaching number 1 as 14 acts  achieved their first number 1 status. Here is a video recording by Roxette “Joyride”: https://www.youtube.com/watch?v=xCorJG9mubk Roxette was a Swedish duo of Marie Fredriksson and Per Gessle who formed the duo in 1986 and had great success in Sweden and the U.S. but took a hiatus when Fredriksson was diagnosed with brain cancer which she fought until the duo reunited in 2009 until she died from it on December 9, 2019.
4.  Word of the Day—the word of the day is “repugn” which means to fight against or oppose which the Reds are trying to do in spades to Biden’s agenda.
5.  Dodge One Bullet Only to Be Felled by the Other—celebrating the birth on this day in 1936 of noted news anchor, journalist and late night talk show host Tom Snyder who was a heavy smoker even on air but gave it up in 2000 only to come down with leukemia and die from it on July 29, 2007 at age 71.
On this day in
a. 1846 the Donner Party heading for California departed from Independence, Missouri to be trapped in the Sierra Nevada Mountains by snow to endure death and cannibalism before being rescued.
b. 1949 the Soviet Union finally threw in the towel on its illegal Berlin Blockade thwarted by  the Berlin Airlift that kept the city alive and ended it.
c.  1982 while visiting  the Shrine  of  the Virgin Mary  at Fatima, Portugal, security guards thwarted an attack of Pope Paul II by Ajuan Maria Fernández y Krohn, a priest, with bayonet. After being blessed by the Pope he was arrested, tried, convicted and sentenced to 6 years but released after serving 3 years.
d. 2002 former President Jimmy Carter  went to  Cuba to  start a five   day  visit with Fidel Castro.
e. 2017 the Wanna-Cry 4 day worldwide cyber ransomware attack infected 400,000 computers including those of the U.K. National Health Service and Telefonica which attack was believed to have been started by the Lazurus Group a hacking group with ties to North Korea.
Reflections to the limerick in poetry: “It pains me to see how modern society has totally corrupted the limerick and given it the reputation of lewdness which, in turn, has morally barred our children from even taking a peek into this wonderful form of fun and rhythm. I think Edward Lear would turn in his grave if he knew that. I have therefore decided to reinvent the limerick as it was originally intended: to poke fun, irreverence, just plain daftness, or erroneous behaviour.”― Bernie Morris, An A-Z of Looney Limericks
Please enjoy the poems on events of interest on my twitter   account below (if you like them, retweet, and follow me) and follow my blogs. Always good, incisive and entertaining poems on my blogs—click on the links below. Go to www.alaskanpoet.blogspot.com for Ridley’s Believe It Or Not—This Day in History,  poems to inspire, touch, emote, elate and enjoy and poems on breaking news items of importance or go to  Ridley's Believe It Or Not for just This Day in History.

© May 12, 2021 Michael P. Ridley aka The Alaskanpoet
Alaskanpoet for Hire, Poems to Admire
Poet Extraordinaire, Beyond Compare
A Unique Gift, All Recipients a Lasting Gift

Posted by Michael P. Ridley aka the Alaskanpoet at 12:38 AM