US Vaccinations: As of 5/11/2021 263.1 million doses and finally after days of dropping a third day of increases to 2.20 million per day in the last week sounds impressive but if the rate does not increase it will take us now decreased to some 3 months to have 75% of the population vaccinated which many believe is necessary to develop herd immunity. In California 33,632,769 total doses have been given (78.2% of doses received now less than the U.S. average of 78.8%), but even with the pressure of a recall to be scheduled this fall which hopefully end Newsom’s term, California has moved down from 25th tied with Illinois to 27th tied with Indiana out of the 50 states in terms of the percentage of doses administered as a percentage of doses delivered to the states and at 35.8% of its population fully vaccinated compared to the U.S. average of 35.1% has moved slight up  from 26th  to 25th among the 50 states.  A long way to go to get herd immunity in terms of getting vaccines received into arms and the percentage of the population fully vaccinated compared to other states which means a great reason to recall this inept and hypocritical governor.
Non CV News: The cyber ransomware attack by the “Darkside” is causing prices to rise in states most affected, Virginia to join the list of states with a state of emergency declared and even a silver lining in Georgia with Governor Brian Kemp suspending the gas tax to give some relief (no word when Colonial will restore pipeline service or better yet where the FBI stands in finding and bringing these false “Robin Hoods” to justice; Biden rightfully so is being condemned in a rarity by Blues and Reds over the Hamas rocket attacks in Jerusalem as Israel called up 5,000 reservists and Egypt appears to be trying to broker a cease fire (wonder if Biden can shed the Obama like tendency to weaken its support for this ally and become more Trumpian and stand up to the jihadist like Omar and Tlaib); the “reporters” at the NYT must be on some strong hallucinogenic or blinding drugs when the rag was claiming the Colonial Pipeline shutdown was not leading to long lines or panic buying; if one were to choose one of the more level headed senators it would be Susan Collins who is outraged over the CDC’s confusing and conflicting advice on the pandemic and has lost confidence in the CDC (the line of fellow senators so outraged should grow with “Flip Flop” Fauci’s politicized advice and growing revelations over the activities of the National Institute of Allergies and Infectious Diseases which he was the director of and still is since 1984 concerning the lab in Wuhan which to almost a person in the scientific community other than Fauci and political hacks believe was the source of the pandemic); Teodoro Macias has been named as the gunman who had dated the girl whose birthday party was being celebrated and was one of his 6 victims as police reveal the motive as anger over not being invited (unbelievable and so hard to detect such outburst other than he was reported to have controlled her during their relationship).
In another example of the academic corruption that is occurring on our colleges and universities, as 600 rockets were shot by Hamas into Israel,  the student government of the University of Michigan is calling for students to boycott Israel for its apartheid and war crimes against the Palestinians; the 15 year old girl involved in the failed deadly carjacking of an Uber Eats driver, Mohammad Anwar’s car has pled guilty to felony murder and will be released when she turns 18 (not sure of the status of the 13 year old but she cannot serve time after age 18 also); the chutzpah of the teacher’s union in Feces City defies description and words of proper condemnation but it agreed to open 2 of its 15 schools for one day for seniors not to receive in person instruction but supervision for one day then close in order to extract  $12 million in school opening funds from the state (another reason to recall “let them get $600” Newsom facing recall); Bezos is building a $500 million yacht to ease his divorce and Gates to ease his has been hiding out at the exclusive golf club the Vintage Club in Indian Wells.
As Blue states are losing seats as Reds move to tax and business friendlier Red states, leave it to the political cartoonist to point out the fear that these Blue migrants will be bringing their leftist voting ideas with them. 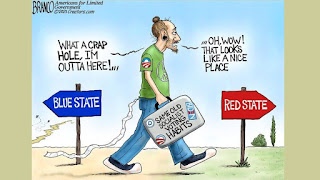 Chicago Gun Violence: Hey Jackass.com is back to show that through May 10, 2021,  gun violence involving mostly persons of color shooting mostly persons of color in Chicago is alive and well with 1158 persons shot of whom 203 have died.
As always, I hope you enjoy today’s holidays and observances, factoids of interest for this day in history, a video musical link to “Nothing Compares to U” by Sinéad O'Connor , the fact that you are not a reprobate by any means and a quote from Klaus Barbie justifying his barbarity to the Jews he had imprisoned,  secure in the knowledge that if you want to send a gift for any memorable events like Father’s Day, college graduations, birthdays, weddings, or anniversaries, you know that the Alaskanpoet can provide you with a unique customized poem at a great price tailored to the event and the recipient. Please contact me for details on the pricing.
1. Sex Differences in Health Awareness Day—created by the Society for  Women’s Health Research in 2005 to promote understanding on how biological sex has certain health issues across a person’s life regardless how that person wants to identify or be identified in the opposite biological gender.
2. World Ego Awareness Day—created by the World Ego Awareness Movement in 2018 and celebrated on this day since 2018 to promote understanding of the difficulties created by an over aggressive ego and the damages done to the person with such egos and also to the persons around the person.
3.  1990 Number 1 Song USA—the number 1 song in 1990 was “Nothing Compares to U” by Sinéad O'Connor on a run of 4 weeks in that position to join 25 other songs reaching number 1 and join 11 other acts who achieved their first number 1 status. Here is a video recording by Sinéad O'Connor of “Nothing Compares to U”: https://www.youtube.com/watch?v=0-EF60neguk  This Roman Catholic Irish born singer has been performing since 1986, endured rehab to overcome a 30 year addiction to cannabis, forum shopped for second opinions to free herself from a diagnosis of bipolarism and converted to Islam but still singing strong at age 54.
4.  Word of the Day—the word of the day is “reprobate” which means a reprehensible or immoral person which is a good word to describe the fake news spewing out the “journalists” mouths at the MSM.
5.  Sad Way to Silence the Press—celebrating the birth on this day of Israeli American journalist who, while covering Syrian Civil in Aleppo, was abducted on August 4, 2013 and held for over a year while secret efforts were made to free him but to no avail and a video of his beheading was discovered on September 2, 2014. Obama who vowed to destroy ISIS failed, leaving Trump to accomplish that fact.
On this day in
a. 1846 President James Polk requested from the  Congress its declaration of war against Mexico, which by overwhelming majorities it passed 2 days later.
b. 1960 Adolf Eichmann was kidnapped by Mossad in Argentina to be quickly spirited out of the country to face trial, conviction and execution for his crimes in the Holocaust.
c.  1987 after hiding out for years in Bolivia under an assumed name, Klaus Barbie, the “Butcher of Lyon”, went on trial after being extradited in 1983. He was convicted on July 4, 1987 and sentenced to life in prison where he died at age 77 on September 25, 1991 of leukemia and prostate cancer.
d. 1987 IBM’s Deep Blue beat World Chess Champion Garry Kasparov in their final game of their match to become the first time a machine has beaten a human World Champion Chess player.
e. 2010 David Cameron became the UK’s Prime Minister  after he had formed its first coalition government since World War II.
Reflections to inspire the need for the death penalty as a means to rid ourselves of unrestrained evil: “What is there to regret? I'm a committed Nazi, and if I had to be born a thousand times over, I would be a thousand times what I have been.” Klaus Barbie.
Please enjoy the poems on events of interest on my twitter   account below (if you like them, retweet, and follow me) and follow my blogs. Always good, incisive and entertaining poems on my blogs—click on the links below. Go to www.alaskanpoet.blogspot.com for Ridley’s Believe It Or Not—This Day in History,  poems to inspire, touch, emote, elate and enjoy and poems on breaking news items of importance or go to  Ridley's Believe It Or Not for just This Day in History.

© May 11, 2021 Michael P. Ridley aka The Alaskanpoet
Alaskanpoet for Hire, Poems to Admire
Poet Extraordinaire, Beyond Compare
A Unique Gift, All Recipients a Lasting Gift

Posted by Michael P. Ridley aka the Alaskanpoet at 11:11 PM