May 7, 2021 Ridley's Believe It Or Not Military Spouse Appreciation Day

US Vaccinations: As of 5/7/2021 254.8 million stuck at 2.09 million per day in the last week sounds impressive but if the rate does not increase it will take us now increased to some 4 months to have 75% of the population vaccinated which many believe is necessary to develop herd immunity. In California 32,367,810 total doses have been given (77.7% of doses received slightly more than the U.S. average of 77.9%), but even with the pressure of a recall to be scheduled this fall which hopefully end Newsom’s term, California has fallen from 25th to 30th out of the 50 states in terms of the percentage of doses administered as a percentage of doses delivered to the states and at 33.6% of its population fully vaccinated compared to the U.S. average of 33.4% has moved up from 30th to 28th tied with  Kentucky among the 50 states.  A long way to go to get herd immunity in terms of getting vaccines received into arms and the percentage of the population fully vaccinated compared to other states which means a great reason to recall this inept and hypocritical governor.              Non CV News: For those of us tired of listening to Psaki’s mistakes and covering up Biden the news today that she would be leaving in less than a year is good news (her replacement will have the same tough job of trying to hide the growing signs of dementia racking Biden); the April jobs report came out and it was a huge disappointment with only 266,000 new jobs added (already Blues are jumping on the statistic to justify the massive national debt busting “infrastructure” bill); Chauvin who has been convicted and has filed for a new trial due to jury misconduct and influence and  his 3 fellow officers in the Floyd case who are going to trial in August on lesser charges have been charged by the feds for depriving Floyd of his civil rights under the color of law; the more the past of expanding real estate tycoon and founder of the BLM is scratched the more it looks like we are dealing with a committed Marxist who praised the thoughts and deeds of Mao (next large corporation that is shamed under the false rubric of “white guilt” that doles out dollars to BLM should remember Marx’s warning that “we will hang the last capitalist with the rope he sold us.”
Zuckerberg who was trying to spend millions to influence elections has just been hit with a new Florida law that bans private money for election administration; Where’s Waldo, who in her 44 days of being the immigration czar has refused to visit the border, is proposing millions of aid to be sent to the Northern Triangle to address the “root causes” of migration (ignoring the fact that illegals remit billions to their home countries and stopping the wall and reversing Trump’s border policies are the real “root causes” of this crisis); in a wakeup call to our one party state in California, California has lost population for the first time in its history as more people fed up with high taxes, regulations, crime and illegal immigration are leaving the state; in Florida a school teacher spanked a disruptive 1st grader with a paddle after the child’s illegal alien mother asked her to because the child had threatened to call police if she was spanked and the illegal alien filed a criminal complaint which fortunately the DA determined was not warranted and teacher will not be prosecuted; Big Tech has told supporters of free speech, the cornerstone of our democracy, to in essence pound silicon, leave it to the political cartoonist to put their censorship in comparison to the activities of the Soviet Union during the Cold War: 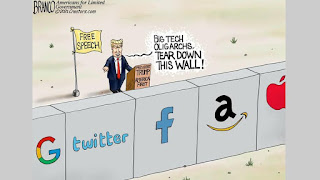 Chicago Gun Violence: Hey Jackass.com is back to show that through May 6, 2021, gun violence involving mostly persons of color shooting mostly persons of color in Chicago is alive and well with 1115 persons shot of whom 195 have died.
As always, I hope you enjoy today’s holidays and observances, factoids of interest for this day in history, a video musical link to “Addicted to Love” by Robert Palmer, that you are not a remuant person and a quote by David Gerrold on integrated circuits,  secure in the knowledge that if you want to send a gift for any memorable events like Mother’s Day, college graduations, birthdays, weddings, or anniversaries, you know that the Alaskanpoet can provide you with a unique customized poem at a great price tailored to the event and the recipient. Please contact me for details on the pricing.
1. Be Best Day—created by First Lady Melania Trump on this day in 2017 to promote the end of bullying and to encourage children to excel and avoid drugs despite the ridicule she received from the MSM.
2. Military Spouse Appreciation Day—proclaimed by President Ronald Reagan on  April 17, 1984 to recognize the importance of military spouses to our military forces by proclaiming May 23 as the day to have spouses recognize their importance which day was changed to the Friday immediately preceding Mother’s Day.
3.  1986 Number 1 Song USA—the number 1 song in 1986 was “Addicted to Love” by Robert Palmer on a run of 1 week in that position to join 30 other songs reaching number 1 and 19 other acts who achieved their first number 1 status. Here is a video recording by Robert Palmer of “Addicted to Love”: https://www.youtube.com/watch?v=XcATvu5f9vE Palmer was am English singer/songwriter who performed from 1964-2003 but sadly consumed 3 packs of cigarettes a day and died from a heart attack on September 26, 2003 at the age of 54.
4.  Word of the Day—the word of the day is “remuant” which means restless or fidgety, a trait that unnerves most people.
5.  True to His Nickname—celebrating the birth on this day in 1976 of Michael Murphy whose nickname was the “Protector” who was a Naval Lieutenant and Navy Seal who was killed in Afghanistan when his troop came under attack and needed help which caused him to leave cover to head up a mountain and expose himself to enemy fire to be able to contact air assets for help and in so doing was shot 14 times but still completed the call to save his men and then die on June 28, 2005 and be posthumously awarded the Medal of Honor as the first member of the U.S. Navy to be so honored since the Vietnam War.                     On this day in
a. 1952 in what would prove to be a very smart move by a misnamed man, Gerald Dummer published the concept for the integrated circuit, which formed the foundation for all computers.
b. 1992 203 years after it had been proposed, Michigan ratified the 27th Amendment to the Constitution which was then added banning Congress from giving itself mid-term raises.
c. 1998 Mercedes Benz bought Chrysler Corporation for $40 billion in the largest merger of industrial companies.
d. 1999 Pope John Paul II visited Romania, the first Pope to visit a predominantly Eastern Orthodox country since the Great Schism of 1054.
e. 2004 freelance radio tower repairman Nicholas Berg after having been abducted by Islamic terrorists was beheaded by Abu Musab al-Zarqawi, an act videotaped and shown on the internet. This scumbag was given a one way ticket to Paradise on June 7,2006 when an American F-16 dropped 2 500 lb. bombs on a safe house he was having a meeting with jihadists.

Reflections on integrated circuits: “In the entire history of the human species, every tool we've invented has been to expand muscle power. All except one. The integrated circuit, the computer. That lets us use our brain power.”— David Gerrold, noted American science fiction screenplay writer and author.
Please enjoy the poems on events of interest on my twitter   account below (if you like them, retweet, and follow me) and follow my blogs. Always good, incisive and entertaining poems on my blogs—click on the links below. Go to www.alaskanpoet.blogspot.com for Ridley’s Believe It Or Not—This Day in History,  poems to inspire, touch, emote, elate and enjoy and poems on breaking news items of importance or go to  Ridley's Believe It Or Not for just This Day in History.

© May 7, 2021 Michael P. Ridley aka The Alaskanpoet
Alaskanpoet for Hire, Poems to Admire
Poet Extraordinaire, Beyond Compare
A Unique Gift, All Recipients a Lasting Gift

Posted by Michael P. Ridley aka the Alaskanpoet at 9:34 AM