May 3, 2021 Ridley's Believe It Or Not Wold Press Freedom Day

US Vaccinations: As of 5/3/2021 246.8 million at 2.29 million per day in the last week sounds impressive but if the rate does not increase it will take us now reduced to some 3 months to have 75% of the population vaccinated which many believe is necessary to develop herd immunity. In California 31,382,140 total doses have been given (79.2% of doses received slightly less than the U.S. average of 79.0%), but even with the pressure of a recall to be scheduled this fall which hopefully end Newsom’s term, California has fallen from 27th tied with South Dakota to alone in 28th  out of the 50 states in terms of the percentage of doses administered as a percentage of doses delivered to the states and at 32.0% of its population fully vaccinated compared to the U.S. average of 31.8% has fallen from 28th to 29th .  A long way to go to get herd immunity in terms of getting vaccines received into arms and the percentage of the population fully vaccinated compared to other states which means a great reason to recall this inept and hypocritical governor.
Non CV News: What is not surprising is that NBC, WAPO and the NYT were lying and got caught claiming Giuliani had prior warning before the FBI raid  that the FBI was investigating Russian involvement in the election but what is surprising is that the troika of bias corrected that lie (lawyers are not above the law but police raids on lawyers too often raise questions of the attorney client privilege which is the cornerstone of our judicial system); Reds are properly outraged over Biden’s idea of $4 billion in aid to the Northern Triangle to improve conditions to deter flight to the U.S. (the three countries are plagued by massive corruption and the remittances from those 3 countries in excess of $16 billion a year far outweigh aid Biden is talking about); after a marriage of 27 years Bill and Melinda Gates are calling it quits and will be divorcing (Melinda will probably surpass McKenzie Bezos in terms of wealth unless there was a far less generous prenuptial agreement in place); the Bidens visited a 5th Grade classroom in Virginia and received an earful on virtual learning some good and other bemoaning it was terrible with goods often due to they could nap, eat or plead mic problems  if they didn’t know the answer; the Multnomah County Sheriff announced last week that no more citations for any rioting charges but sadly the facts are on the federal level that of the 97 people arrested on federal charges from May through October, 2021, 58 have had their charges dismissed or are on track to be dismissed and most of the remaining 32 will probably also be dismissed (no wonder cops across the country are leaving or disgusted when putting your life at risk to arrest someone means they are even prosecuted).
The hubris and ego of Cuomo defy the imagination as he is after his idiotic orders that sent CV infected patients into nursing homes to kill the residents there is now hectoring the unvaccinated to get vaccinated before they kill their grandparents (enough of this lying hypocrite—when does New York rise up and impeach him to send him packing?); Jeff Tobin of CNN who was granted leave but not fired after being caught masturbating during Zoom sessions is still absent and CNN is mum on whether he has been axed or will return; another shooting and killing of a black, this one Erick Derrel Smith who is alleged to have murdered his ex-girlfriend and her nephew and then kidnapped a baby and who died in a shootout with police with the baby taken to the hospital (hopefully even the most rabid BLM anti-cop haters will have a hard time pushing the narrative that the police were not justified); Governor DeSantis has suspended his COVID-19 emergency orders, signed bills preventing the requirement of vaccine passports and limiting CV emergency orders to 7 days; while CV cases continue to decline and more and more of the population is vaccinated, the Pentagon citing CV concerns has banned the 30 year old tradition of veterans on motorcycle in tribute to missing veterans citing CV concerns (easier for an illegal with or without CV to cross the border than Americans to peacefully assemble to pay tribute to veterans); Germany with CV deaths at 1000/M has cancelled Ocktober Fest for the 2nd year.
While the attacks by the BLM, Blues and MSM on Senator Tim Scott have continued unabated, leave it to the political cartoonist to reveal them as the true divisive racists in this country: 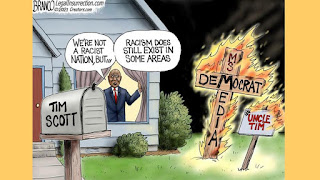 Chicago Gun Violence: Hey Jackass.com is back to show that through May 2, 2021,  gun violence involving mostly persons of color shooting mostly persons of color in Chicago is alive and well with 1085 persons shot of whom 192 have died.
As always, I hope you enjoy today’s holidays and observances, factoids of interest for this day in history, a musical link to “I Like Rock and Roll” by  Joan Jett and the Blackbirds, that you enjoy having a relache when under the gun to meet a deadline and a quote by the Florida Times Union and Citizen on the great fire of 1901,  secure in the knowledge that if you want to send a gift for any memorable events like Mother’s Day, college graduations, birthdays, weddings, or anniversaries, you know that the Alaskanpoet can provide you with a unique customized poem at a great price tailored to the event and the recipient. Please contact me for details on the pricing.
1. Sun Day—created by President Jimmy Carter on this day 1978 to promote the use of solar power to produce electricity and after over 40 years solar power in the first 5 months of 2020 produced only 3.2% of our nation’s electricity.
2. World Press Freedom Day—created by the UN General Assembly in December 1993 and celebrated on this day since 1994 to promote a free press not constrained by the government. We in America are lucky to have a free press which today although not restrained by the government is under woke attack by its leftist members and more and more frequently guilty of censorship by omission of articles or events damaging to the left’s agenda.
3.  1982 Number 1 Song USA—the number 1 song in 1982 was “I Love Rock and Roll” by Joan Jett and the Blackbirds on a run of 7 weeks in that position to join 14 other songs reaching number 1 and 9 other acts which achieved their first number 1 status. Here is a recording by Joan Jett and the Blackbirds of “I Love Rock and Roll”: https://www.youtube.com/watch?v=t5ecqUhec-s Jett and the Blackbirds are still rocking and rolling and are on tour this year, COVID-19 permitting.
4.  Word of the Day—the word of the day is “relache” which means an interval of rest which watching Biden stumble and fumble through the easiest conversation is something that he needs a lot of.
5.  Checkmate Way to Young—celebrating the birth on this day in 1995 of a noted young chess phenom Ivan Bukavshin who was defeating his peers right and left in chess tournaments but faced a drug checkmate from which he could not escape and died from an overdose of No-Spa.
On this day in
a. 1901 a fire broke out in Jacksonville, Florida and when it had burned out 8 hours later, the fire had burned 146 city blocks, killed 7 people, destroyed more than 2,368 buildings, and left almost 10,000 residents homeless (a third of the city’s population).
b. 1952 the Kentucky Derby was telecast nationally for the first time.
c. 1999 Oklahoma was hit with a F5 tornado that caused $1 billion in damages, 45 deaths and 665 injuries and produced the highest winds on the planet ever recorded 300 m.p.h. +/- 20.
d. 2001 the U.S. lost its seat on the U.N. Human Rights Commission, a seat which it had occupied since 1947.
e. 2016 a wildfire descending toward Fort McMurray, Alberta, Canada caused the evacuation of 84,000 residents who later returned to 2400 homes that had been  burnt to the ground.
Reflections on courage and destruction in the Great Fire of 1901: ”The young ladies of the force [Western Union], cool and calm, were standing to their posts, even when the building 40 feet across the street was crumbling. The city building went, a department building, the armory, the County Courthouse, the Clerk’s office with the county records, the Criminal Courthouse, the city jail and the High and Grammar schools and the Catholic church and orphanage, Motyairs Memorial Church, St. John’s Episcopal Church and the convent. The scene was one that beggars description.” Florida Times-Union and Citizen describing the carnage.
Please enjoy the poems on events of interest on my twitter   account below (if you like them, retweet, and follow me) and follow my blogs. Always good, incisive and entertaining poems on my blogs—click on the links below. Go to www.alaskanpoet.blogspot.com for Ridley’s Believe It Or Not—This Day in History,  poems to inspire, touch, emote, elate and enjoy and poems on breaking news items of importance or go to  Ridley's Believe It Or Not for just This Day in History.

© May 3, 2021 Michael P. Ridley aka The Alaskanpoet
Alaskanpoet for Hire, Poems to Admire
Poet Extraordinaire, Beyond Compare
A Unique Gift, All Recipients a Lasting Gift

Posted by Michael P. Ridley aka the Alaskanpoet at 10:44 PM