US Vaccinations: As of 5/5/2021 249.6 doses million now falling to 2.13 million per day in the last week sounds impressive but if the rate does not increase it will take us now increased to some 4 months to have 75% of the population vaccinated which many believe is necessary to develop herd immunity. In California 31,670,889 total doses have been given (77.8% of doses received slightly more than the U.S. average of 77.6%), but even with the pressure of a recall to be scheduled this fall which hopefully end Newsom’s term, California has finally moved from 28th to 27th out of the 50 states in terms of the percentage of doses administered as a percentage of doses delivered to the states and at 32.4% of its population fully vaccinated compared to the U.S. average of 32.3% has fallen from 28th to 30th among the 50 states.  A long way to go to get herd immunity in terms of getting vaccines received into arms and the percentage of the population fully vaccinated compared to other states which means a great reason to recall this inept and hypocritical governor.
Non CV News: As Oracle and the Nashville City Council came to a deal on Oracle’s new research facility that will include a $175 million construction inducement, a commitment by Oracle to invest over $1.2 billion and the creation of over 8,000 high paying high tech jobs, Caitlyn Jenner was lambasting Newsom for the flight of California businesses and his hypocrisy during the pandemic (she is a true rarity—a fiscal Red conservative and a Red moderate social policy supporter); while Facebook evidently panders to the cartels for their ad money to entice illegals to smuggle into this land, the company has banned Trump for life (Orwellian assault on free speech justified by algorithms written by leftists); the long knives in the Reds are being unsheathed to use against Liz Cheney to remove her from her leadership post in the Reds as she strikes back bemoaning Trump supporters as a cult; South Carolina has found a novel way to circumvent the problems of supply and medical ethics of using drugs to execute the condemned and appears to be bringing back the firing squad  which is quick and evidently painless, although potentially bloody (Gary Gilmore déjà vu ending the Furman ban on executions by being shot by gunfire in Utah); Kurt Bardella, appearing on Joyless Reid’s biased show had the inanity to proclaim the Trump and the Reds were a greater threat to American than Al-Qaeda, Osama bin Laden and the Taliban combined (great sense of tolerance from this radicalized Blue).
Pseudo biased “journalist” Brian Stelter whose inane rants make us want to seek from him shelter was applauding Facebook’s permanent Trump ban; Antonio Hurtado, a U.S. citizen  who was the captain of the boat that was washed into the cliffs at Point Loma and destroyed with 33 illegals pulled from the water and at least 3 died, has been arrested for smuggling the illegals, many of whom told the Border Patrol they had paid $15-$18,000 to be smuggled into the U.S. (so much for the theory the illegals are fleeing poverty which is not a reason for asylum); in Biden’s inane view of the world, illegals who are illiterate, low skilled and whom we do not need are welcomed into this nation yet 17,000 Afghans who worked as translators for our military during the war in Afghanistan and are hanging by a slender thread as if we do not bring them with us most if not all run a great risk of becoming dead; Bezos Blue Orchard company on July 20 will launch into space with 1 seat auctioned off to the highest bidder, go up 60 some miles, create 3 minutes of weightlessness and then return via parachute to Earth (how dumb does a person have to be for a very brief ride into space and then back?); Garret Rolfe, the Atlanta police officer who shot and killed Rashard Brooks who fired at him with a taser taken from one of the officers trying arrest him and was fired the next day and although he has been charged with murder will now have a job as the Atlanta Civil Service Board ruled the city violated its own rules in firing him.
While Giuliani has had his home search by FBI leave it to a pollical cartoonist to reveal the politicization and double standard of justice of the FBI to our detriment: 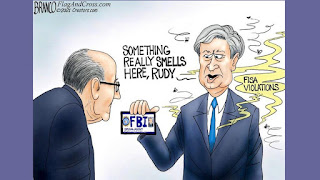 Chicago Gun Violence: Hey Jackass.com is back to show that through May 2, 2021,  gun violence involving mostly persons of color shooting mostly persons of color in Chicago is alive and well with 1101 persons shot of whom 195 have died.
As always, I hope you enjoy today’s holidays and observances, factoids of interest for this day in history, a musical link to “Against All Odds (Take a Look at Me Now” by Phil Collins, that you enjoy having time to remigate and three quotes by President Ronald Reagan on his visits to Bitburg and Bergen-Belsen,  secure in the knowledge that if you want to send a gift for any memorable events like Mother’s Day, college graduations, birthdays, weddings, or anniversaries, you know that the Alaskanpoet can provide you with a unique customized poem at a great price tailored to the event and the recipient. Please contact me for details on the pricing.
1. Cinco de Mayo Day—celebrating the victory of the Mexican Army over the French at the Battle of Puebla on this day in 1862 and the celebrations of which now appear to have surpassed St. Patrick’s Day in terms of alcohol consumed.
2. Bike to School Day—not sure who created this or when it started but suspect it was not observed last year as the teachers’ unions were already holding school children hostage by closing the schools due to the pandemic but albeit far too slowly their damaging grip is being lessened but not fast enough in California.
3.  1984 Number 1 Song USA—the number 1 song in 1984 was “Against All Odds (Take a Look at Me Now” by Phil Collins on a run of 2 weeks in that position to join 19 other songs reaching number 1 and 14 other acts achieved who their first number 1 status. Here is a recording by Phil Collins of “Against All Odds (Take a Look at Me Now)”: https://www.youtube.com/watch?v=wuvtoyVi7vY Collins is a British singer and drummer best known for his career with Genesis, a productive solo career and a 5 year retirement ending in 2015 to spend time with his family, and being the wealthiest drummer after Ringo Starr.
4.  Word of the Day—the word of the day is “remigate” which means to row which is a great way to exercise either on the water or in a gym on a machine.
5.  First Action Star Up in a Cloud of Smoke—celebrating the birth on this day in 1914 of noted screen and stage actor Tyrone Power who was a pilot in the Marines during WWII who unfortunately had a 3-4 pack a day habit along with numerous pipe bowls that contributed to his early death on November 15, 1958 while being airlifted to a hospital in Madrid. His pregnant wife gave birth to his son Tyrone Power, Jr. two months after his death.
On this day in
a. 1891 to the joy of music lovers, the New York City Music Hall, later renamed the Carnegie Hall, was opened to the public for the first time with Tchaikovsky conducting the first performance there.
b. 1973 Secretariat, noted Triple Crown Winner, won the 1973 Kentucky Derby at the bub 2 minute time of 4 1:592⁄5 , a record that still stands today.
c. 1981 Bobby Sands after a 66 day hunger strike protesting British Army activities in Northern Ireland, died in Long Kesh Prison.
d. 1985 President Ronald Reagan briefly visited the German military cemetery at Bitburg that also contained the graves of 49 members of the Waffen SS to lay a wreath in a visit that generated much controversy and also delivered a speech at the site of the concentration camp at Bergen-Belsen.
e. 1994  18 yr. old teenager Michael Fay was caned in Singapore for stealing some road signs and vandalizing 10 cars.

Reflections on the attending the Bitburg German military cemetery and Bergen-Belsen: “These [SS troops] were the villains, as we know, that conducted the persecutions and all. But there are 2,000 graves there, and most of those, the average age is about 18. I think that there's nothing wrong with visiting that cemetery where those young men are victims of Nazism also, even though they were fighting in the German uniform, drafted into service to carry out the hateful wishes of the Nazis. They were victims, just as surely as the victims in the concentration camps.” Ronald Reagan on his Bitburg visit.
"I know you and Nancy don't want me to go through with this, but I don't want you to change anything when you get over there, because history will prove I'm right. If we can't reconcile after forty years, we are never going to be able to do it". Ronald Reagan to his Chief of Staff Michael Deaver responding to criticism he not visit the Bitburg military cemetery.

“All these children of God, under bleak and lifeless mounds, the plainness of which does not even hint at the unspeakable acts that created them. Here they lie, never to hope, never to pray, never to live, never to heal, never to laugh, never to cry… And then, rising above all this cruelty, out of this tragic and nightmarish time, beyond the anguish, the pain and suffering, and for all time, we can and must pledge: never again.” Ronald Reagan speech at Bergen-Belsen
Please enjoy the poems on events of interest on my twitter   account below (if you like them, retweet, and follow me) and follow my blogs. Always good, incisive and entertaining poems on my blogs—click on the links below. Go to www.alaskanpoet.blogspot.com for Ridley’s Believe It Or Not—This Day in History,  poems to inspire, touch, emote, elate and enjoy and poems on breaking news items of importance or go to  Ridley's Believe It Or Not for just This Day in History.

© May 5, 2021 Michael P. Ridley aka The Alaskanpoet
Alaskanpoet for Hire, Poems to Admire
Poet Extraordinaire, Beyond Compare
A Unique Gift, All Recipients a Lasting Gift

Posted by Michael P. Ridley aka the Alaskanpoet at 5:57 PM