US Vaccinations: As of 5/10/2021 261.6 million doses and finally after days of dropping a second day of increases to 2.12 million per day in the last week sounds impressive but if the rate does not increase it will take us now increased to some 4 months to have 75% of the population vaccinated which many believe is necessary to develop herd immunity. In California 33,438,134 total doses have been given (79.6% of doses received slightly more than the U.S. average of 79.3%), but even with the pressure of a recall to be scheduled this fall which hopefully end Newsom’s term, California has only moved up from 26th to 25th tied with Illinois out of the 50 states in terms of the percentage of doses administered as a percentage of doses delivered to the states and at 35.5% of its population fully vaccinated compared to the U.S. average of 34.8% has moved down from  24th tied with Kansas to 26th  among the 50 states.  A long way to go to get herd immunity in terms of getting vaccines received into arms and the percentage of the population fully vaccinated compared to other states which means a great reason to recall this inept and hypocritical governor.               Non CV News: North Carolina has declared a state of emergency of the shutdown of Colonial Pipeline’s pipelines as the company announced it was temporarily restarting the flow of natural gas through Pipeline 4; the FBI has named the “DarkSide” as the ransomware hackers of Colonial Pipeline that is still struggling to get natural gas permanently flowing through  its pipelines by weekend (hope the FBI with or without help of our vaunted Big Tech Giants are pedal to the metal trying to arrest these felons); Randi Weingarten, the president of the American Federation of Teachers, a lackey stooge of the DNC, is defending the critical race theory of Project 1619 the left is trying to shove down our throats (a moment of sanity in Oklahoma as the governor there has banned the teaching of it in public schools and universities as has the state assembly in Tennessee);  the FDA has approved the Pfizer vaccine for COVID-19 for children; NASA Osiris REx probe after retrieving samples from the asteroid Bannu has now begun its journey back to Earth; NBC using the excuse of lack of diversity of the Hollywood Foreign Press Club that determines the Golden Globe Awards announced it is not going to broadcast the 2022 ceremonies because of concern over corruption and the lack of diversity (good way to get Woke credits but ignoring the reason for the basement low ratings of this year’s 6.3 million viewers is the relentless politicization of the ceremony by the leftist elite featured); the latest revelation that “yes Virginia” Biden has gone progressive not moderate is the news coming out that his new deputy director of policy and outreach Natalie Montelongo was tweeting that people must look for the nearest ICE facility and shut it down.
Hard to believe but Biden is saying after the abysmal job report that Americans must start accepting jobs offered or lose their expanded unemployment compensation benefits (encouraging moment but given his behind the scenes progressive handlers don’t hold your breath) ; in a rare display of bipartisan unity Blues and Reds, save Rep. Omar who was typically on an anti-Israeli rant, were condemning Hamas for launching dozens of rockets at Jerusalem; it looks like until Iran has some of its patrol boats sunk instead of just warning shots, it will continue to play a dangerous game of chicken with U.S. warships in the Persian Gulf; Where’s Waldo continues to avoid the border knowing she will fail and does not want to damage her changes for a 25th Amendment move into the Oval Office.
As the surge of illegals streaming across our border continues unabated, leave it to the political cartoonist to point out the idiocy of the left’s charge of systematic racism as the newest targets of that racism are trying their best to get into this country: 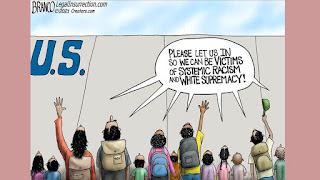 Chicago Gun Violence: Hey Jackass.com is back to show that through May 9, 2021,  gun violence involving mostly persons of color shooting mostly persons of color in Chicago is alive and well with 1146 persons shot of whom 200 have died.
As always, I hope you enjoy today’s holidays and observances, factoids of interest for this day in history, a video musical link to “Like a Prayer” by Madonna, the fact that you rarely merit a reprehend and a quote from Mark Salmon on the burden on small business,  secure in the knowledge that if you want to send a gift for any memorable events like Mother’s Day, college graduations, birthdays, weddings, or anniversaries, you know that the Alaskanpoet can provide you with a unique customized poem at a great price tailored to the event and the recipient. Please contact me for details on the pricing.              1. National Small Business Day—created by the Small Business Administration in 1993 to commemorate the contribution of small businesses (less than 20 employees) that create most of the new jobs in America and who have been through a very challenging year with the effects of the COVID-19 being a disaster.
2. World Lupus Day—observed since 2010 to promote awareness and seek a cure for lupus, an auto-immune disease that affects some 5,000,000 people, a large majority of which are women.
3.  1989 Number 1 Song USA—the number 1 song in 1989 was “Like a Prayer” by Madonna on a run of 3 weeks in that position to join 31 other songs reaching number 1 and while 12 acts achieved their first number 1 status. Here is a video recording by Madonna of “Like a Prayer”: https://www.youtube.com/watch?v=79fzeNUqQbQ Madonna, the “Queen of Pop” at 62 is still one of the highest grossing female artists of all time and shows no signs of slowing down or cutting back her concerts and records.
4.  Word of the Day—the word of the day is “reprehend” which means to rebuke which is something we are not doing enough of over the Biden created chaos at the border.
5.  Dumb to Drop a False Id—bemoaning the birth on this day in 1903 of Otto Bradfisch who joined the SS and rose to command Einsatzkommando (EK) 8, who were responsible for killing thousands of Jews in the Soviet Union following its invasion by the Wehrmacht on June 21, 1941. At wars end Bradfisch with the Red Army closing in managed to steal the paybook of a German officer Carl Evers and fled to the West to be captured by the Americans, then turned over to the British and released in August of 1945 and he wisely continued to use the name Carl Evers until he started working for an insurance company and reverted to his real name which resulted in his arrest and sentenced to 13 years in prison from which he was released on October 16, 1965 after serving 4 years, 2 months and 26 days or about 1 hour for each of 37,000  Jews killed by his command to finally die at age 91.
On this day in
a. 1837 banks in New York City suspended the payment of specie and would no longer redeem commercial paper at face value which led to a 5 year recession and decline in wages and output and was known as the Panic of 1837.
b. 1940 in a real “oops” moment the Luftwaffe mistakenly dropped 60 bombs on the German city of Freiburg which was 146 kilometers from the nearest French city of Nancy that it might have been targeting, killing 57 German citizens.
c.  1962 Marvel Comics published the first issue of The Incredible Hulk.
d. 1975 Sony introduced the Betamax videocassette recorder which would ultimately lose in the VCR wars to the VHS format.
e. 2013 1 World Trade Center in NYC became the tallest building in the Western Hemisphere.
Reflections on burdens on small business: “The federal government needs to get off  the backs of small businesses and let the private sector grow and create jobs instead of harnessing it with onerous regulations and a repressive tax code.” Matt Salmon, former Red Representative from Arizona and right on with his observations.
Please enjoy the poems on events of interest on my twitter   account below (if you like them, retweet, and follow me) and follow my blogs. Always good, incisive and entertaining poems on my blogs—click on the links below. Go to www.alaskanpoet.blogspot.com for Ridley’s Believe It Or Not—This Day in History,  poems to inspire, touch, emote, elate and enjoy and poems on breaking news items of importance or go to  Ridley's Believe It Or Not for just This Day in History.

© May 10, 2021 Michael P. Ridley aka The Alaskanpoet
Alaskanpoet for Hire, Poems to Admire
Poet Extraordinaire, Beyond Compare
A Unique Gift, All Recipients a Lasting Gift