As he with a straight face avers that our credibility with our allies has not been shellacked
With his cut and run spur of the moment retreat putting American civilians in harm’s way
Then hiding out in Wilmington then Camp David as Afghanistan forces melted away
After 50,000 dead in 20 years with American airpower pulled out
We were misled by Biden that Afghanistan would not quickly fall yet it turned into a rout
Warned by almost 2 dozen State officials on the ground
That not accelerating the removal of civilians and Afghans who helped us was unsound
The Afghan translators, interpreters and those who worked for and with us
Now stuck in Kabul being hunted down by revengeful Taliban tossed under the bus
They and we should feel that Biden like Mussolini against France has stabbed them in the back
Shredded our credibility with our allies on America’s word no longer can we give this dementia suffering president any more slack
Leave it to the political cartoonist to portray the reality that Biden’s dementia has cost
It will take years upon years to regain the credibility due to Biden we have lost
© August 21, 2021 The Alaskanpoet 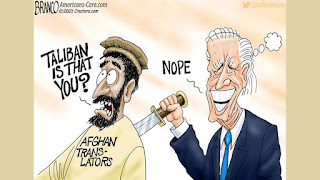 Posted by Michael P. Ridley aka the Alaskanpoet at 5:54 PM