August 3, 2021 Ridley's Believe It Or Not National Night Out

CV Open Gate: Lost in the pronouncements by Biden and his lackeys  that there is no crisis of illegals surging across the border is that fact that COVID-19 is alive and well and spreading in the Northern Triangle and Mexico which has been passed by Argentina and newly added Columbia to move down to 12th  on my list of deaths from the pandemic  at 1850/M with a fatality rate of 9.72% of closed cases and the 3 countries in the Northern Triangle in terms of active cases and deaths per million are as follows even though the data may be suspect as underreported (regardless of number we need no more cases):
Guatemala:  Active Cases:  33,799 Deaths/M 574
Honduras:    Active Cases: 191,026 Deaths/M 784
El Salvador:  Active cases:     8,177 Deaths/M 406
US Vaccinations: As of 8/2/2021 346.9 million doses at up from .663 million per day to .673 per day (down to 7 months to go for 75% of population vaccinated) and in California 88,024 per day which means if the rate does not increase it will take us now some 4 months to have 75% of the population of California vaccinated which many believe is necessary to develop herd immunity (other than Flip Flop Fauci who may believe that 90% is required).  In California 45,340,695 total doses have been given (88.9% of doses received to exceed the U.S. average of 86.7%), but even with the pressure of a recall to be scheduled this fall which hopefully end Newsom’s term, California has  moved  up from 17th  to 16th tied with Utah  of the 50 states in terms of the percentage of doses administered as a percentage of doses delivered to the states and at 53.1% of its population fully vaccinated compared to the U.S. average of 49.7% has moved up  from 19th to 18th among the 50 states.  A long way to go still to get herd immunity in terms of getting vaccines received into arms and the percentage of the population fully vaccinated compared to other states which means a great reason to recall this inept and hypocritical governor.
Non  CV News: The NY AG has just released a detailed report on Andrew Cuomo’s alleged sexual harassment of multiple corroborating claimants sparking renewed calls for his resignation or impeachment while he defiantly denies all allegations and for now has no intention of resigning (White House has so far been silent on its view); the Andrew Cuomo sexual misconduct scandal has on this issue lit the flame of needed bipartisanship in that every member, Blue and Red, from New York in the House and Senate are calling for Cuomo to resign which may be the least of his problems as the Albany DA is investigating criminal culpability (as a 3 term governor Cuomo has appointed a slew of judges in the Empire State and with his arrogance is probably feeling that there is no way his appointees will turn their back on him and perform their sworn duties as a judge); Biden is scrambling to try to find a way to extend the ban on evictions through executive order as Mad Maxine throws the Constitution into the toilet and urges Biden to ignore SCOTUS and issue an extension; Alexander Vindman trying to sell his book was on Morning Joe  making the unchallenged claim that not removing Trump cost us 600,000 lives (total insane rant but a anti-Trumper always a big welcome on the show); the NIH Director is playing with his COVID-19 Yo-Yo first urging vaccinated parents to wear masks at home to protect their unvaccinated children then reversing himself; as mask mandates are becoming the norm, from the government it looks more and more like the Keystone Kops as a former Biden COVID-19 adviser proclaims that cloth and paper masks are not that effective and should be replaced with N-95 masks (only in government can you mandate the wearing of a mask that is great for fogging up your glasses and concealing your identity but useless in fighting the virus; Missouri’s governor was quick to act after the McCloskeys entered their guilty pleas by pardoning them; finally voters are seeing shallowness self promoting side of AOC as Nina Turner,  the candidate she backed in the Blue primary for Ohio’s 11th District lost;  as masks continue to face attacks for not being effective, leave it to the political cartoonist showing a disgraced Fauci trying to become relevant with his “Bubble Boy” CV resistant protection: 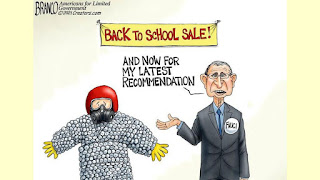 Chicago Gun Violence: Hey Jackass.com is alive and well to collect data to show that through August 2, 2021, gun violence involving mostly persons of color shooting mostly persons of color in Chicago is alive and well with 2592 persons shot of whom 445 have died.
As always, I hope you enjoy today’s holidays and observances, factoids of interest for this day in history, a  recording musical link to “I Just Want to Be Your Everything” by Andy Gibb, the fact that you totally removed from being a schmegeggy; and a quote by Judge Kenesaw Mountain Landis on the Black Sox 1919 Scandal, secure in the knowledge that if you want to send a gift for any memorable events like Labor Day, college graduations, birthdays, weddings, or anniversaries, you know that the Alaskanpoet can provide you with a unique customized poem at a great price tailored to the event and the recipient. Please contact me for details on pricing.
1.  National Night Out—created by the National Association of Town Watch in 1984 and celebrated on the first Tuesday of August to allow neighborhoods to take back their streets and parks from criminal elements with the cooperation of the police—given the surge in shootings in broad daylight across the nation and the exodus of police from urban police forces, the observance might be a much more a more dangerous one to observe.
2.  National Watermelon Day—celebrating that melon that has been enjoyed since early Egyptian times, loaded with vitamins and close to 95% water a totally refreshing summer treat and its rind when pickled is a great addition to any meal.
3. 1977 Number 1 Song USA—the number 1 song in 1977 on this day was “I Just Want to Be Your Everything” by Andy Gibb on a run of 3 weeks in that position to join 28 other songs that achieved number 1 status and join 17 other acts who achieved their first number 1 song on the Billboard Hot 100. Here is a recording of “I Just Want to Be Your Everything” by Andy Gibb: https://www.youtube.com/watch?v=tA6L8-lxaA8  Gibb enjoyed great success in the 70’s but struggled with depression and drugs and his career started to fade; he tried to make a comeback going into Betty Ford for rehab in 1985 and another rehab attempt in 1987 after which he thought he had overcome his drug addiction and started recording songs again but 2 days after his 30th birthday on March 7, 1988 he checked into a hospital complaining of chest pains and on the 10th he lapsed into unconsciousness and died from myocarditis, an inflammation of the heart caused by his years of cocaine use.
4.  Word of the Day—the word of the day is “schmegeggy” which means an idiot which describes too many of the people wandering the halls of Congress.

5.  Unlucky Day—celebrating the birth on this day in 1964 of Lucky Lube, South Africa’s most successful reggae musician with 20 albums but whose luck ran out on October 18, 2007 when after dropping 2 of his children off at school he was confronted by carjackers who did not probably recognize him and who fatally shot him.

On this day in:
a. 1921 MLB 1st Commissioner Judge Kenesaw Mountain Landis affirmed the lifetime ban from baseball of 8 baseball players of the Chicago White Sox known as Chicago Black Sox one day after the jury deliberating for 3 hours on the trial for the alleged  fixing of the 1919 World Series found all 8 not guilty.
b. 1946 Santa Claus Land, the world’s first themed park, opened in, appropriately named, Santa Claus, Indiana.
c. 1977 Tandy announced the TRS-80, one of the world’s first mass produced personal computers.
d. 2004 the pedestal of the Statue of Liberty reopened to the public after being closed following the 9/11 attacks.
e.  2019 Patrick Crusius entered a Walmart in El Paso, Texas and started shooting and when the shooting stopped, he had killed 23 and wounded 23 and fled the scene to shortly thereafter surrender to authorities. His trial has not yet started due to the delays in the judicial system due to COVID-19 pandemic.
Reflections on the Chicago Black Sox Scandal: Regardless of the verdict of juries, no player who throws a ball game, no player who undertakes or promises to throw a ball game, no player who sits in confidence with a bunch of crooked ballplayers and gamblers, where the ways and means of throwing a game are discussed and does not promptly tell his club about it, will ever play professional baseball.” Judge Kenesaw Mountain Landis

© August 3, 2021 Michael P. Ridley aka The Alaskanpoet
Alaskanpoet for Hire, Poems to Admire
Poet Extraordinaire, Beyond Compare
A Unique Gift, All Recipients a Lasting Gift

Posted by Michael P. Ridley aka the Alaskanpoet at 10:06 PM