On Biden’s failed cut and run withdrawal strategy the chickens of failure have just come home to roost
The drumbeat for the 25th and resignation based on signs of growing dementia have been given a boost
Dementia is a terrible condition that no one should have to suffer
But maybe as the memory banks are emptied from reality a possible buffer
During his press conference yesterday that buffer may have been breached
The enormity of his failures on withdrawal may have his surviving neurons reached
Head down, eyes closed hanging on to his closed briefing books
The image of a man overcome by events, an admission of failure look
In the Wilson Era the effects of a stroke on the mind from the public easier to conceal
No internet, no cable news 24/7, no social media, no radio, no TV so easy to  truth of mental impairment not reveal
Biden should and must take the mental cognitive test that Trump passed
If not growing concerns based on watching him casts great doubt on how long his presidency can last
If he passes it more power to him and concern over his mental failings can be put to bed
And the disagreements and attacks should move to his policies and implementation instead
No Red or Indie on removal of Biden should in the slightest rejoice
In addition to empathy for the disease, realization with Harris it is a suboptimal Hobson’s choice
But sadly it is a choice that we must elect
A continuing descent into Alice in Wonderland dementia we must reject
© August 27, 2021 The Alaskanpoet 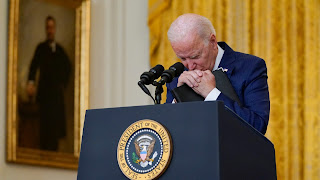 Posted by Michael P. Ridley aka the Alaskanpoet at 2:57 PM