According to Representative Cori Bush that observation for her must be wrong and does not fit
Trying to her hypocrisy defend
Justifying the outlandish money on private security she spends
Actually money she did not earn but campaign donations from really dumb fools
Or from lobbyists so very astute that with her lack of integrity she could be for their clients a pliant tool
She with a straight face proclaims she is too important on this planet to risk harm
She is needed to on police brutality and systematic racism raise the alarm
And since in her mind for police systematic racism there is no cure
She wants to defund the police and their budget then transfer
To social workers and mental health pros
Only then can the shootings by cops of blacks slow
Safe with her armed guards paid for by other parties’ loot
And why the voters must wake in 2022 and give her the boot
Urban blacks who do not live in gated communities
Daily face death and maiming by black gangs who show no pity
They want and need more better trained cops not less
The Thin Blue Line must be thicker so deadly crime against them can be suppressed
Omar on the issue of private security also merits our disgrace
But Bush more so with her hypocrisy justification thumbed in our face
Great message but should have featured that total biased buffoon
Corie Bush not Omar should have been holding money bag in cartoon
© August 8, 2021  The Alaskanpoet 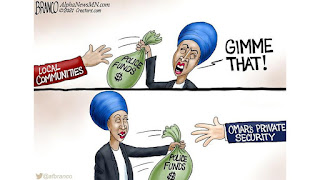