RIDLEY’S BELIEVE IT OR NOT November 7, 2021
CV World Cases: The CV pandemic across the planet continues on an increasing basis with cases now over 250 million at 250,610,452 cases,  18,704,070 of which are active, 231,906,382  closed with 226,841,997 recoveries (97.82%), and cracking the 5,000,000 barrier 5,064,585 deaths (2.18% )to continue the low trend of increased cases with increased recovery percentages and decreased death percentages with some plateaus, dips, and rises.
CV USA Cases: Total cases now over 47 million at 47,336,587 with 9,228,410 active cases of which 11,227 are serious or critical, (8,599 on 3/25/2021) (back to steady decreases despite the  Delta variable to .122% of active cases and to increase the reduction from the 29,271 peak on 12/31/2020 to 18,044, 38,108,167 closures with 774,218 deaths (2.03%) and with 37,332,949 recoveries (97.97%). Our death rate percentage is .15% lower than the world’s death rate.
Standing: On a deaths per million population measure on a steady   but slow climb to 2324 the U.S. ranks behind Peru (5966) the new number 1 which has had a quantum leap in deaths previously unmatched which was a change in the classification to give Peru the a new method of reporting to have a fatality rate of 9.26% of total cases now; Bulgaria the new number 2 (3646), Hungary (3239), Brazil (2840) which has been hit with a rapid rise in deaths now slowing down, Romania (2662), Argentina (2537), and newly added to the list Columbia (2471),  and slightly better than Belgium (2242), Mexico (2216), Italy (2194), UK (2074),  Poland (2058), Chile (1957),  Spain (1871),  Ecuador newly added to list (1832),  France (1801), Portugal (1792), Bolivia (1595),  Sweden (1475) that never closed its economy down like we did, and Switzerland (1292).
Tests: No need to tally tests as testing programs are functioning well.
CV Open Gate: Lost in the pronouncements by Biden and his lackeys  that there is no crisis of illegals surging across the border is that fact that COVID-19 is alive and well and spreading in the Northern Triangle and Mexico which is  10th  on my list of deaths from the pandemic  at 2216/M with 347,067 active cases and a fatality rate of 8.33% of closed cases and the 3 countries in the Northern Triangle in terms of active cases and deaths per million are as follows even though the data may be suspect as underreported (regardless of number we need no more cases):
Guatemala:  Active Cases:    3,622 Deaths/M  841
Honduras:    Active Cases: 249,863 Deaths/M 1019
El Salvador:  Active cases:   14,485 Deaths/M  564
US Vaccinations: As of 11/7/2021 429.4 million doses,  1.25 million per day (down to 3 months for 75% of population vaccinated) and in California 157,997  per day  (which means  75% of the population of California have received at least one shot which many believe is necessary to develop herd immunity (other than Flip Flop Fauci who may believe that 90% is required).  In California 55,197,093 total doses have been given (84.6%  of doses received to exceed the U.S. average of 80.7%), California has moved from 7 to 5th tied with New York of the 50 states in terms of the percentage of doses administered as a percentage of doses delivered to the states and at 61.7% of its population fully vaccinated compared to the U.S. average of 58.3% and has not  moved from 14th   in terms of getting vaccines received into arms and the percentage of the population fully vaccinated compared to other states.
Non  CV News:  With gas prices going through the roof the Biden Administration held hostage to its war of fossil fuels is considering shutting down a pipeline into Michigan that delivers 540,000 barrels of petroleum products from Western Canada (if these idiots go through with that action and we have a bitter winter voters are going to go through the roof when they can’t fuel their cars or heat their homes and businesses in 2022); with airlines already suffering staffing issues with pilots, pilots are already protesting the vaccine mandate which has been stayer by a TRO that has not yet been put into effect (if Thanksgiving flights are cancelled due to a shortage of pilots because of the mandate look for even more unhappy voters to take their wrath out on the Blues); the first lawsuit arising out of the stampeded at Astroworld that killed 8 attendees and injured hundreds has been filed by an injured attendee against rappers Drake and Travis Scott for inciting the crowd and also naming Live Nation and NRG Stadium; as expected the Packers without quarantined Aaron Rodgers lost 13-7; Clyburn on TV today ignored Biden’s mental failings and ineptness and blamed his low ratings due to the difficult time the country is facing; in another example of why parents are outraged, a high school teacher’s quiz seemed to blast conservatives with questions like this Identify a group of idiots (a) KKK, (b) all of Florida, (c) Fox News, (d) Texans; the San Francisco Chronicle headquartered in Feces City is raising the question of whether the city’s residents should learn to tolerate burglaries which are soaring as part of the cost of living in the city; Palin electrified the RNC when she called herself a hockey mom but in retrospect not as much connect as the parents in the Virginia governor’s race calling themselves “mama and papa bears” so leave it to the political cartoonist to portray the fear Blues should feel from outraged parents rushing to protect their kids from CRT: 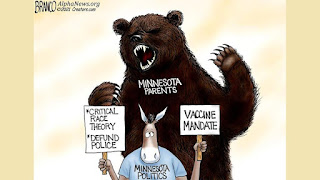 Chicago Gun Violence: Hey Jackass.com is alive and well to collect data to show that through November 6, 2021, gun violence involving mostly persons of color shooting mostly persons of color in Chicago is alive and well with 4007 persons shot of whom 693 have died.
As always, I hope you enjoy today’s holidays and observances, factoids of interest for this day in history, a  recording link to  “You Are My Lucky Star”  by Eddy Duchin and His Orchestra with vocals by Len Sherwood, the fact that you have never had to endure an examination by a sigmoidoscope; and a quote from The Dog Cancer Survival Guide: Full Spectrum Treatments to Optimize Your Dog's Life Quality and Longevity, secure in the knowledge that if you want to send a gift for any memorable events like Thanksgiving or Veterans  Day, college graduations, birthdays, weddings, or anniversaries, you know that the Alaskanpoet can provide you with a unique customized poem at a great price tailored to the event and the recipient. Please contact me for details on pricing.

1.  National Retinol Day—created by RoC Skincare on October 25, 2021 and celebrated for the first time on this day in 2021 to promote the use of retinol, the assumed gold standard in skincare and treating wrinkles.
2.  National Canine Lymphoma Awareness Day—created by Terry Simmons to create awareness this most common of the cancers that affects and promote treatments and understanding of the effects of the disease and options for dog owners.
3. 1935  Number 1 Song USA—the number 1 song in 1935 on this day was “You Are My Lucky Star” by Eddy Duchin and his Orchestra  with vocals by Lew Sherwood on  a run in that position of 3 weeks to join 17 other  songs that achieved number 1 status. Here’s a recording of “You Are My Lucky Star” by Eddy Duchin and His Orchestra with vocals by Lew Sherwood:  https://www.youtube.com/watch?v=ASufZlKaJ8E
4.  Word of the Day—the word of the day is “sigmoidoscope” an instrument to examine the rectum and sigmoid lower colon which feels like a roto rooter when inserted.
5.  Different Strokes—celebrating the birth on this day in 1964 of Dana Plato, who started doing commercials at age 7 and was a successful young actress best known for her role as Kimberly on Different Strokes but who struggled with drugs and alcohol and establishing a career as a adult actress and died of an accidental prescription drug overdose which was subsequently ruled a suicide on May 8, 1999.
On this day in:
a. 1874 a cartoon by Thomas Nast in Harpers Weekly portrayed the Republican Party as an elephant for the first time.
b. 1967 President Lyndon B. Johnson signed the Public Broadcasting Act creating the Public Broadcast Corporation to the joys of viewers of Sesame Street.
c. 1994 the college radio station WXYC on the campus of the University of North Carolina launched the world’s first internet radio station.
d. 2000 SCOTUS in the case of Bush v. Gore brought an end to the highly contested presidential elections by deciding in favor of George Bush over Al Gore.
e. 2000 the DEA discovered one of the largest LSD labs in a converted ICBM silo in Wamego, Kansas.
Reflections on canine lymphoma: “ “You may have heard ‘there’s nothing we can do,’ or ‘the only options are chemotherapy and radiation.’ You may have heard your dog has one week or two months or six months left. It doesn’t matter what
you’ve heard. No one has a crystal ball, no matter how many letters or credentials line up agter his name.” The Dog Cancer Survival Guide: Full Spectrum Treatments to Optimize Your Dog's Life Quality and Longevity
Please enjoy the poems on events of interest on my twitter account below (if you like them, retweet, and follow me) and follow my blogs. Always good, incisive and entertaining poems on my blogs—click on the links below. Go to www.alaskanpoet.blogspot.com for Ridley’s Believe It Or Not—This Day in History,  poems to inspire, touch, emote, elate and enjoy and poems on breaking news items of importance or go to  Ridley's Believe It Or Not for just This Day in History.

Posted by Michael P. Ridley aka the Alaskanpoet at 1:20 AM