November 6, 2021 Ridley's Believe It Or Not Learn to Homebrew Day

RIDLEY’S BELIEVE IT OR NOT November 6, 2021
CV World Cases: The CV pandemic across the planet continues on an increasing basis with cases now over 250 million at 250,150, 759 cases,  18,655,132 of which are active, 231,505,627  closed with 226,447,416 recoveries (97.82%), and cracking the 5,000,000 barrier 5,058,211 deaths (2.18% )to continue the low trend of increased cases with increased recovery percentages and decreased death percentages with some plateaus, dips, and rises.
CV USA Cases: Total cases now over 47 million at 47,287,033 with 9,241,691 active cases of which 11,521 are serious or critical, (8,599 on 3/25/2021) (back to steady decreases despite the  Delta variable to .125% of active cases and to increase the reduction from the 29,271 peak on 12/31/2020 to 17,750, 38,045,342 closures with 774,726 deaths (2.04%) and with 37,270,616 recoveries (97.96%). Our death rate percentage is .14% lower than the world’s death rate.
Standing: On a deaths per million population measure on a steady   but slow climb to 2322 the U.S. ranks behind Peru (5965) the new number 1 which has had a quantum leap in deaths previously unmatched which was a change in the classification to give Peru the a new method of reporting to have a fatality rate of 9.26% of total cases now; Bulgaria the new number 2 (3626), Hungary (3239), Brazil (2838) which has been hit with a rapid rise in deaths now slowing down, Romania (2648), Argentina (2537), and newly added to the list Columbia (2470),  and slightly better than Belgium (2242), Mexico (2213), Italy (2194), UK (2073),  Poland (2057), Chile (1957),  Spain (1871),  Ecuador newly added to list (1835),  France (1801), Portugal (1792), Bolivia (1595),  Sweden (1475) that never closed its economy down like we did, and Switzerland (1292).
Tests: No need to tally tests as testing programs are functioning well.
CV Open Gate: Lost in the pronouncements by Biden and his lackeys  that there is no crisis of illegals surging across the border is that fact that COVID-19 is alive and well and spreading in the Northern Triangle and Mexico which is  10th  on my list of deaths from the pandemic  at 2213/M with 347,702 active cases and a fatality rate of 8.33% of closed cases and the 3 countries in the Northern Triangle in terms of active cases and deaths per million are as follows even though the data may be suspect as underreported (regardless of number we need no more cases):
Guatemala:  Active Cases:    4,054 Deaths/M  835
Honduras:    Active Cases: 249,863 Deaths/M 1019
El Salvador:  Active cases:   14,767 Deaths/M  5632
US Vaccinations: As of 11/6/2021 428.0 million doses,  1.67 million per day (down to 2 months for 75% of population vaccinated) and in California 169,273  per day  (which means  75% of the population of California have received at least one shot which many believe is necessary to develop herd immunity (other than Flip Flop Fauci who may believe that 90% is required).  In California 55,017,312 total doses have been given (84.6%  of doses received to exceed the U.S. average of 80.7%), California has moved from 5th  to 7th of the 50 states in terms of the percentage of doses administered as a percentage of doses delivered to the states and at 61.6% of its population fully vaccinated compared to the U.S. average of 58.3% and has not  moved from 14th    to 15th in terms of getting vaccines received into arms and the percentage of the population fully vaccinated compared to other states.
Non  CV News: Thanks to 13 Reds who crossed the aisle to vote with the Blues other than 6 Squad members who vote no, the House “infrastructure” bill previously passed by the Senate passed in the House (do not be surprised to see those 13 face primary challenges); after calling reports of $450,000 payments to illegals who were separated from their children were “garbage” Biden has back tracked and seems to support such payments (another incentive for illegals to swarm here that he can’t understand); the 5th Circuit Court of Appeals has issued a TRO banning Biden’s mask mandate requiring employers of more than 100 employees to require masks and a condition of employment; ten state AG’s have filed suit against Biden’s requirement that for all federal contractors, mask wearing must be a condition of employment;  at the Houston Astroworld Festival last night attended by 50,000 fans 8 attendees were killed and hundreds injured in a stampede by attendees when Travis Scott took the stage; voting on Biden’s mislabeled “Build Back Better” plan will be delayed until the CBO delivers its effect on budget analysis which should show a massive increase in the national debt; Aaron Rodgers of the Green Bay Packers has tested positive in his nonvaccinated body and will be quarantined and miss this weekend’s showdown with the Kansas Chiefs; on the war against COVID-19 front Pfizer has announced that a pill in studies reduces the hospitalization rate of people especially high risk adults by 90% and the company will be seeking approval by the FDA to have the pill subjection to prescriptions and bad news if one is a South Asian, British researchers have discovered a gene which 60 percent of them carry that renders the lungs less capable to respond to COVID-19 with increased risk of death; time to set one’s clocks back an hour before retiring to bed as daylight savings time comes to an end; Biden struggles to get trucks out of the ports to deliver supplies now waiting in the massive numbers of ship moored outside our ports, leave it to a political cartoonist to display where Biden does not want the needed trucks to go: 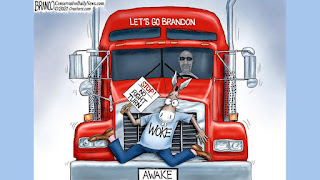 Chicago Gun Violence: Hey Jackass.com is alive and well to collect data to show that through November 5, 2021, gun violence involving mostly persons of color shooting mostly persons of color in Chicago is alive and well with 3978 persons shot of whom 688 have died.
As always, I hope you enjoy today’s holidays and observances, factoids of interest for this day in history, a  music video link to  “Easy on Me”  by Adele, the fact your house is sightworthy; and a quote by Pat Tilman on life's satisfactions, secure in the knowledge that if you want to send a gift for any memorable events like Thanksgiving or Veterans  Day, college graduations, birthdays, weddings, or anniversaries, you know that the Alaskanpoet can provide you with a unique customized poem at a great price tailored to the event and the recipient. Please contact me for details on pricing.
1.  Learn to Homebrew Day—created by the American Homebrewers Association in 1999 to celebrate the fine art of homebrewing to create a distinctive brew free of the federal alcohol taxes and the bland tastes of large brew companies now seeing the writing on the wall and introducing or acquiring beers that taste like they have come from a microbrewery.
2.  Basketball Day—celebrating sport of basketball and observed on the birthday of its inventor in 1861.
3. 2021  Number 1 Song USA—the number 1 song in 2021 on this day was “Easy on Me” by Adele  on  a run in that position so far of 2 weeks to join 23 other  songs that achieved number 1 status as 9 acts achieved their first number 1 song. Here’s a music video of “Easy on Me” Adele: https://www.youtube.com/watch?v=U3ASj1L6_sY.
4.  Word of the Day—the word of the day is “sightworthy” which means worthy to look at which definitely did not describe Stanford’s performance Utah last night at home losing 52-7.
5.  Rare Company—celebrating the birth on this day of one of only two professional football players who left professional football while we were engaged in hostilities after WWII to die in combat while serving his country in the military—Pat Tilman, a safety for the Arizona Cardinals who walked away from a $3.6 million contract after the end of the 2001 season and enlisted in the Army and during his second tour in Afghanistan was killed by friendly fire on April 22, 2004. The other player was James Kalsu, a starting guard who was the Buffalo Bills rookie of the year who joined the Army after the end of the 1968 season to satisfy his ROTC requirement and was killed in South Vietnam on July 21, 1970, during a mortar attack.
On this day in:
a. 1869 Princeton defeated Rutgers 6-4 in the first intercollegiate football game.
b. 1900 Thomas McKinley and his running mate are elected in a Republican landslide that adds to their House and Senate majorities.
c.  1947 the program Meet the Press on NBC and is now the longest running news program.
d. 1995 Browns owner Art Modell announced he had signed a deal to relocate the Cleveland Browns to Baltimore.
e. 2012 Tammy Baldwin, the first openly gay individual, was elected to the U.S. Senate from Wisconsin.
Reflections on life by Pat Tilman: “So use all that is called fortune. Most men gamble with her, and gain all and lose all, as her wheel rolls… A political victory, a rise of rents, the recovery of your sick or the return of your absent friend, or some other favorable event raises your spirits, and you think good days are preparing for you. Do not believe it. Nothing can bring you peace but yourself. Nothing can bring you peace but the triumph of principles.”
Please enjoy the poems on events of interest on my twitter account below (if you like them, retweet, and follow me) and follow my blogs. Always good, incisive and entertaining poems on my blogs—click on the links below. Go to www.alaskanpoet.blogspot.com for Ridley’s Believe It Or Not—This Day in History,  poems to inspire, touch, emote, elate and enjoy and poems on breaking news items of importance or go to  Ridley's Believe It Or Not for just This Day in History.

Posted by Michael P. Ridley aka the Alaskanpoet at 6:43 PM