November 24, 2021 Ridley's Believe It Or Not Black Out Wednesday

RIDLEY’S BELIEVE IT OR NOT November 24, 2021
CV World Cases: The CV pandemic across the planet continues on an increasing basis with cases now over 259 million at 259,475,647 cases,  19,589,402 of which are active, 239,886,645  closed with 234,697,887 recoveries (97.84%), and cracking the 5,000,000 barrier 5,188,678 deaths (2.16% )to continue the low trend of increased cases with increased recovery percentages and decreased death percentages with some plateaus, dips, and rises.
CV USA Cases: Total cases now over 48 million at 48,848,156 with 9,336,656 active cases of which 12,196  are serious or critical, (8,599 on 3/25/2021) (back to steady decreases with upticks despite the  Delta variable to .131% of active cases and to decrease the reduction from the 29,271 peak on 12/31/2020 to 17,075, 39,511,500 closures with 796,480 deaths (2.02%) and with 38,715,020 recoveries (97.98%). Our death rate percentage is .15% lower than the world’s death rate.
Standing: On a deaths per million population measure on a steady   but slow climb to 2387 the U.S. ranks behind Peru (5978) the new number 1 which has had a quantum leap in deaths previously unmatched which was a change in the classification to give Peru the a new method of reporting to have a fatality rate of 9.26% of total cases now; Bulgaria the new number 2 (4023), Hungary (3382), Romania (2918), Brazil (2857) which has been hit with a rapid rise in deaths now slowing down passed by Romania, Argentina (2543), and newly added to the list Columbia (2482),  and slightly better than Belgium (2290), Mexico (2239), Italy (2211), Poland (2107), UK (2110), Chile (1973),  Spain (1879),  Ecuador newly added to list (1839),  France (1812), Portugal (1809), Bolivia (1605),  Sweden (1483) that never closed its economy down like we did, and Switzerland (1309).
Tests: No need to tally tests as testing programs are functioning well.
CV Open Gate: Lost in the pronouncements by Biden and his lackeys  that there is no crisis of illegals surging across the border is that fact that COVID-19 is alive and well and spreading in the Northern Triangle and Mexico which is  10th  on my list of deaths from the pandemic  at 2239/M with 344,876 active cases and a fatality rate of 8.31% of closed cases and the 3 countries in the Northern Triangle in terms of active cases and deaths per million are as follows even though the data may be suspect as underreported (regardless of number we need no more cases):
Guatemala:  Active Cases:     2011  Deaths/M  863
Honduras:    Active Cases: 247,266  Deaths/M 1027
El Salvador:  Active cases:   13,187  Deaths/M  576
US Vaccinations: As of 11/24/2021 452.7 million doses,  1.841 million per day (4 weeks left for 75% of population to be vaccinated) and in California 239,176  per day  (which means at least 78% of the population of California has received at least one shot which many believe is necessary to develop herd immunity (other than Flip Flop Fauci who may believe that 90% is required).  In California 58,544,383 total doses have been given (83.6%  of doses received to exceed the U.S. average of 79.9%), California has not moved from  6th of the 50 states in terms of the percentage of doses administered as a percentage of doses delivered to the states and at 62.8% of its population fully vaccinated compared to the U.S. average of 59.0% and has  moved from 15th  to 11th in tied with Colorado in terms of the percentage of the population fully vaccinated compared to other states.
Non  CV News:  The town of Brunswick, Georgia can breathe easier as the jury in the trial for the murder of Ahmaud Aubrey found Travis McMichaels guilty on all 9 counts, his father Greg McMichaels guilty on 8 counts and their neighbor William Bryan guilty of felony murder (although like the Rittenhouse trial there were protestors before the verdict, unlike the Rittenhouse trial the prosecution performed excellently and the self-defense claim of the defendants was a farce and discounted by the jury); although the D.A. in Waukesha has blood on his hands for the miniscule bail that let Brooks out and just days latter kill 6 people and injure 47 others at a Christmas Parade, Biden seems to be doubling down on his desire to require cashless bail; as this poet suspected the social media posts in the past of Darrell Brooks reveal racist anti-white  posts calling for their deaths and praising Hitler for killing Jews (let’s hope the cashless bail D.A. in Waukesha is competent to add hate crime charges to the multiple murder and assault charges to if convicted either execute Brooks or confine him to prison without possibility of parole for the rest of his miserable life);  HRC once again when she opens her mouth proves she is so out of touch with Americans as she proclaims that we do not understand Biden’s “accomplishments” (au contraire as we understand his failing cognitive state and his complete lack of accomplishments as opposed to failures); while Americans are reeling under the inflation beast, Jill and Joe are off for Thanksgiving at the compound of  someone whose net worth of $4.6 billion makes him immune from the inflation woes being suffered—David Rubenstein, cofounder of the private equity firm The Carlyle Group; Biden’s release of 50 million barrels of oil from the strategic reserve which was created to survive oil supply disruptions caused by natural disasters or wars is rightfully by attacked as a political stunt which will do squat to relieve the price increases of petroleum products as long as Biden continues his war to curtail domestic production; the 95th Annual Macy’s Day Parade will be viewed live this year unlike in 2020 where it was viewed only on TV with the concern not of COVID but of winds that would ground the famous very large balloons; as deaths from COVID-19 under Biden have surpassed deaths during the Trump Administration Biden’s top adviser Ron Klaine has told Reds to “bring it on” if they choose to attack Biden’s handling of the pandemic; Russian troops are continuing to mass on the Ukraine border with 100,000 in potentially invasion jump off points; a recent study has revealed that CRT is being taught at many of the top 50 private K-12 schools; Biden in a photo op pardons two turkeys named “Peanut Butter” and “Jelly” leave it to the  political cartoonist to portray the fate of Americans this Thanksgiving on the proverbial inflation chopping block: 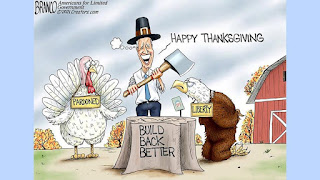 Chicago Gun Violence: Hey Jackass.com is alive and well to collect data to show that through November 23, 2021, gun violence involving mostly persons of color shooting mostly persons of color in Chicago is alive and well with 4181 persons shot of whom 730 have died.
As always, I hope you enjoy today’s holidays and observances, factoids of interest for this day in history, a  recording link to “Only Forever” by Bing Crosby and John Scot Trotter and His Orchestra, the fact that you rarely experience singultous moments; and a quote by Stewart Stafford on the murder of Lee Harvey Oswald by Jack Ruby, secure in the knowledge that if you want to send a gift for any memorable events like Thanksgiving or Veterans  Day, college graduations, birthdays, weddings, or anniversaries, you know that the Alaskanpoet can provide you with a unique customized poem at a great price tailored to the event and the recipient. Please contact me for details on pricing.
1.  Evolution  Day—commemorating the publication of on Charles Darwin’s The Origin of the Species on this day in 1859.
2.  Blackout Wednesday—a day for primarily for college students returning home after going to college in the fall to celebrate often in excess with friends they have not seen since leavings but hopefully responsibly or with a designated driver to avoid the painful cost of a DUI.
3. 1940  Number 1 Song USA—the number 1 song in 1940 on this day was “Only Forever” by Bing Crosby and John Scott Trotter and His Orchestra on a run of 9 weeks in that position. Here’s a recording of Bing Crosby and John Scot Trotter and His Orchestra performing “Only Forever”: https://www.youtube.com/watch?v=6XpuTDDFnns
4.  Word of the Day—the word of the day is “singultous” which means hiccupping which may be caused by eating and drinking too much during a Thanksgiving overindulging feast.
5.  The Best Was Not Yet To Come—celebrating the birth on this day in 1941 of noted drummer Pete Best who was asked to join the Beatles in 1960 and played the drums with them until fired at the behest of Lennon, McCartney and Harrison on August 16, 1962 to be soon replaced by Ringo Starr. After dismissal Best played drums without much commercial success and left the business in 1968 to become a civil servant until he formed Pete Best Band in 1988  and is still performing today.
On this day in:
a. 1917 9 members of the Milwaukee Police Department and one civilian were killed by a bomb, the deadliest death toll of police officers in a single event until the attacks on the World Trade Center on 9/11; the perpetrators believed to be anarchists were never caught.
b. 1974 Lee Harvey Oswald was shot by Jack Ruby on national television in the basement of the Dallas Police Department Headquarters while being surrounded by Dallas cops and transported; he died from his wounds shortly thereafter.
c. 1969 Apollo 12 which had landed Astronauts Conrad and Bean on the surface of the Moon while Astronaut Gordon orbited the Moon splashed down in the Pacific Ocean; while 10 Apollo Astronauts are still alive, Conrad, Bean, and Gordon have passed.
d. 1974 Donald Johanson and Tom Gray discovered an Australopithecus  afarensis skeleton in the Awash Valley of the Afar Depression in Ethiopia that was 40% complete which they named “Lucy” after the Beatles’ song.
e. 1989 after a week of protests and his rule Miloš Jakeš and his Politburo resigned in what became known as the “Velvet Revolution” bringing an end to Communist Party rule in Czechoslovakia.
Reflections on Jack Ruby’s murder of Lee Harvey Oswald: “Jack Ruby's assassination of Lee Harvey Oswald was the 1963 equivalent of the second plane hitting the Twin Towers on 9/11 - it turned a seemingly random act of violence into an orchestrated conspiracy, imagined in Ruby's case.” Stewart Stafford noted poet and author of The Vorbing and 400 often quoted quotations.
Please enjoy the poems on events of interest on my twitter account below (if you like them, retweet, and follow me) and follow my blogs. Always good, incisive and entertaining poems on my blogs—click on the links below. Go to  www.alaskanpoet.blogspot.com for Ridley’s Believe It Or Not—This Day in History,  poems to inspire, touch, emote, elate and enjoy and poems on breaking news items of importance or go to  Ridley's Believe It Or Not for just This Day in History.

© November 24, 2021 Michael P. Ridley aka The Alaskanpoet
Alaskanpoet for Hire, Poems to Admire
Poet Extraordinaire, Beyond Compare
A Unique Gift, All Recipients Receive a Lasting Lift

Posted by Michael P. Ridley aka the Alaskanpoet at 5:31 PM