November 17, 2021 Ridley's Believe It Or Not World Prematurity Day

CV World Cases: The CV pandemic across the planet continues on an increasing basis with cases now over 255 million at 255,732,504 cases,  19,445,966 of which are active, 236,286,538  closed with 231,147,585 recoveries (97.83%), and cracking the 5,000,000 barrier 5,138,953 deaths (2.17% )to continue the low trend of increased cases with increased recovery percentages and decreased death percentages with some plateaus, dips, and rises.
CV USA Cases: Total cases now over 48 million at 48,287,925 with 9,239,157 active cases of which 11,566  are serious or critical, (8,599 on 3/25/2021) (back to steady decreases with upticks despite the  Delta variable to .125% of active cases and to decrease the reduction from the 29,271 peak on 12/31/2020 to 17,705, 39,048,768 closures with 787,984 deaths (2.02%) and with 38,260,784 recoveries (97.98%). Our death rate percentage is .15% lower than the world’s death rate.
Standing: On a deaths per million population measure on a steady   but slow climb to 2362 the U.S. ranks behind Peru (5974) the new number 1 which has had a quantum leap in deaths previously unmatched which was a change in the classification to give Peru the a new method of reporting to have a fatality rate of 9.26% of total cases now; Bulgaria the new number 2 (3903), Hungary (3378), Brazil (2851) which has been hit with a rapid rise in deaths now slowing down, Romania (2834), Argentina (2541), and newly added to the list Columbia (2478),  and slightly better than Belgium (2272), Mexico (2229), Italy (2224), Poland (2107), UK (2097), Chile (1965),  Spain (1876),  Ecuador newly added to list (1837),  France (1807), Portugal (1800), Bolivia (1601),  Sweden (1480) that never closed its economy down like we did, and Switzerland (1301).
Tests: No need to tally tests as testing programs are functioning well.
CV Open Gate: Lost in the pronouncements by Biden and his lackeys  that there is no crisis of illegals surging across the border is that fact that COVID-19 is alive and well and spreading in the Northern Triangle and Mexico which is  10th  on my list of deaths from the pandemic  at 2229/M with 344,876 active cases and a fatality rate of 8.32% of closed cases and the 3 countries in the Northern Triangle in terms of active cases and deaths per million are as follows even though the data may be suspect as underreported (regardless of number we need no more cases):
Guatemala:  Active Cases:     2187  Deaths/M  859
Honduras:    Active Cases: 248,072 Deaths/M 1025
El Salvador:  Active cases:   13,211 Deaths/M  572
US Vaccinations: As of 11/17/2021 443.4 million doses,  1.27 million per day (up to 2 months for 75% of population vaccinated) and in California 181,981  per day  (which means at least 76.8% of the population of California has received at least one shot which many believe is necessary to develop herd immunity (other than Flip Flop Fauci who may believe that 90% is required).  In California 57,134,769 total doses have been given (83.8%  of doses received to exceed the U.S. average of 79.8%), California has moved from 5th to 6th of the 50 states in terms of the percentage of doses administered as a percentage of doses delivered to the states and at 61.9% of its population fully vaccinated compared to the U.S. average of 58.5% and has  moved from 14th   to 15th in terms of getting vaccines received into arms and the percentage of the population fully vaccinated compared to other states.
Non  CV News:  the jury is still deciding Rittenhouse’s fate as protestors over his not having already been convicted scuffling with those believing in the rule of law and the right of self defense outside the courthouse probably withing ear shot of the demonstrations and the prosecutors and defense counsel in a snit fit over the prosecutors’ failure to provide video evidence from a drone on the night of the shootings which has prompted another motion for mistrial; the MSM especially Joyless Reid have swallowed the myth hook, line and sinker supported by idiotic statements from Biden that Rittenhouse is a white suprematcist and should be locked away for a long time (a white youth killing 2 whites and wound a 3rd white seems like a stretch to be labeled as the dreaded white suprematcist curse; the leftist rag NYT’s contributor Sarah Jeong has dismissed the historic level of inflation fueled by Biden’s spending and energy policies that is devasting the poor and middle class is merely a panic of rich people flipping their s**t over their parasitic assets being devalued (this “journalist” merits the Marie Antoinette “let them eat cake award” even she will retain her head); 11 Blues have seen the writing on the wall and have announced they will not be running for reelection in 2022 compared to 9 Reds; Mississippi executed its first inmate since 2012 David Lee Cox who shot and killed his estranged wife and sexually assaulted 3 times his 12 year old step daughter as she was dying (his execution occurred some 9 years after his conviction which probably was accelerated by Cox waiving his appeal rights and filing that he was “worthy of death”; with Harris’s approval ratings falling faster and further than Biden’s due to her incompetence, inane laughter to hid that incompetence and being MIA in her role as border czar, Psaki try to make a purse out of a sow’s ear claimed her poll numbers were due to sexism and racism; Aziza Graves, a prolific retail thief symbolic of the brazen shoplifting that is plaguing the Feces City has finally been arrested for stealing an aggregate amount of merchandize totally over $40,000 over a 2 month period; Gates is predicting what many conservatives have been saying for months that COVID-19 deaths will fall to will flu season levels (now that the overwhelming number of adults in the high risk age groups and in nursing homes have been vaccinated probably a good chance he is right; as millions of steel already paid for wall is rusting away and Biden inanely refuses to complete open gaps in the wall but yet demands a security wall be erected around his getaway house in Delaware, leave it to the political cartoonist to reveal the hypocrisy of Biden’s 2 opposed wall stances: 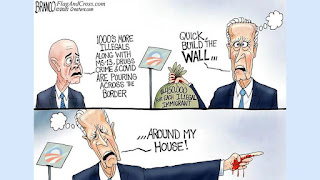 Chicago Gun Violence: Hey Jackass.com is alive and well to collect data to show that through November 16, 2021, gun violence involving mostly persons of color shooting mostly persons of color in Chicago is alive and well with 4093 persons shot of whom 713 have died.
As always, I hope you enjoy today’s holidays and observances, factoids of interest for this day in history, a  recording of “South of the Border (Down Mexico Way)”  by Shep Fields and His Rambling Rhythm Orchestra with vocals by Hal Derwin, the fact you are not a simpliste; and a quote from Peter Navarro on Hillary Clinton and NAFTA, secure in the knowledge that if you want to send a gift for any memorable events like Thanksgiving or Veterans  Day, college graduations, birthdays, weddings, or anniversaries, you know that the Alaskanpoet can provide you with a unique customized poem at a great price tailored to the event and the recipient. Please contact me for details on pricing.
1.  World Prematurity Day—observing the need to raise awareness for the problems created by preterm births on the child and the family from a condition that is the leading cause of infant death and affect 10 % of the global births and celebrated since 2011 and recognized by observers wearing purple on November 17..
2.  International Happy Gose Day—created in 2015 by  Gosenschenke “Ohne Bedenken” (Without Concern) to honor a tart wheat beer first produced in the town of Goslar in Saxony in the 13th Century to become one of Germany’s popular beers in the 19th Century only to fade away and production end in 1958 but in the 80’s it began in a comeback and is enjoying great popularity especially during the holidays.

3. 1939  Number 1 Song USA—the number 1 song in 1939 on this day was “South of the Border (Down Mexico Way)” by Shep Fields and His Rippling Rhythm Orchestra with Hal Derwin on vocals  a run in that position of 5 weeks noncontinuous to join 14 other  songs that achieved number 1 status. Here’s a recording of “South of the Border (Down Mexico Way)” by Shep Fields and His Rippling Rhythm Orchestra with Hal Derwin:   https://www.youtube.com/watch?v=QEiYgEfyiB0. Fields was a bandleader whose career spanned from 1931 through 1963 and was known for assembling “one of the most colorful bands in history.” Derwin was a prominent big band vocalizer in the 30’s who formed his own band in 1940 and ultimately took up residency at the Biltmore in Los Angeles for 6 years in the 50’s.
4.   Word of the Day—the word of the day is “simpliste” which means simplistic or naïve which describes far too many of the inept members of Biden’s Administration like Buttigieg or Mayorkas.
5.  A Byrd Can’t Fly For Long on One Wing—celebrating the birth on this day in 1944 of Gene Clark, a co-founder of the Byrds who was plagued with the deadly troika of drugs, alcohol and smoking and who died way too early from an ulcerous hemorrhage caused by his heavy drinking on May 24, 1991 after cheating death from the throat cancer he had be diagnosed with in early 1991.
On this day in:
a. 1968 in the infamous Heidi Game between the visiting New York Jets and the Oakland Raiders being aired on NBC with the Raiders trailing with a minute to go 29-32, NBC cut to its movie presentation of Heidi, depriving fans of the exciting come back of the Raiders scoring 2 touchdowns to win 43-32 to the outrage of the millions of fans watching the game.
b. 1973 with a straight face President Nixon claimed before a group of 400 Associated Press editors that “I am not a crook.”
c. 1993 the House of Representatives passed what would prove to become the worst trade deal in U.S. history in terms of lost American jobs The North America Free Trade Agreement.
d. 2003 due to the successful recall of Gray Davis Arnold Schwarzenegger began his term of Governor of California.
e. 2019 the first case of COVID-19 is believed to have been reported by a 55 year old Chinese man who had visited a wet market in Wuhan, China although given China’s deception and lies the date may not be certain but the pandemic results across the world sadly are.
Reflections on another nail in the coffin of the Queen in waiting for her coronation: It's extraordinary to me - you cannot name a presidential candidate in history who has singlehandedly, through bad trade deals, destroyed more American jobs and more American factories than Hillary Clinton. She did NAFTA, she did China's entry into the World Trade Organization, she did the South Korean 2012 deal - every single one of those. Peter Navarro, noted author and economist who also served in the Trump Administration
Please enjoy the poems on events of interest on my twitter account below (if you like them, retweet, and follow me) and follow my blogs. Always good, incisive and entertaining poems on my blogs—click on the links below. Go to www.alaskanpoet.blogspot.com for Ridley’s Believe It Or Not—This Day in History,  poems to inspire, touch, emote, elate and enjoy and poems on breaking news items of importance or go to  Ridley's Believe It Or Not for just This Day in History.

© November 17, 2021 Michael P. Ridley aka The Alaskanpoet
Alaskanpoet for Hire, Poems to Admire
Poet Extraordinaire, Beyond Compare
A Unique Gift, All Recipients Receive a Lasting Lift

Posted by Michael P. Ridley aka the Alaskanpoet at 1:51 PM