November 4, 2021 Ridley's Believe It Or Not Diwali

CV World Cases: The CV pandemic across the planet continues on an increasing basis with cases now over 249 million at 249,293,673 cases,  18,454,141 of which are active, 230,803,532  closed with 225,759,334 recoveries (97.81%), and cracking the 5,000,000 barrier 5,044,198 deaths (2.19% )to continue the low trend of increased cases with increased recovery percentages and decreased death percentages with some plateaus, dips, and rises.
CV USA Cases: Total cases now over 47 million at 47,179,199 with 9,217,338 active cases of which 11,834 are serious or critical, (8,599 on 3/25/2021) (back to steady decreases despite the  Delta variable to .128% of active cases and to increase the reduction from the 29,271 peak on 12/31/2020 to 17,437, 37,961,861 closures with 772,168 deaths (2.03%) and with 37,189,693 recoveries (97.97%). Our death rate percentage is .16% lower than the world’s death rate.
Standing: On a deaths per million population measure on a steady   but slow climb to 2317 the U.S. ranks behind Peru (5965) the new number 1 which has had a quantum leap in deaths previously unmatched which was a change in the classification to give Peru the a new method of reporting to have a fatality rate of 9.26% of total cases now; Bulgaria the new number 2 (3599), Hungary (3230), Brazil (2837) which has been hit with a rapid rise in deaths now slowing down, Romania (2602), Argentina (2537), and newly added to the list Columbia (2469),  and slightly better than Belgium (2238), Mexico (2210), Italy (2192), UK (2068),  Poland (2048), Chile (1954),  Spain (1870),  Ecuador newly added to list (1832),  France (1800), Portugal (1790), Bolivia (1594),  Sweden (1474) that never closed its economy down like we did, and Switzerland (1291).
Tests: No need to tally tests as testing programs are functioning well.
CV Open Gate: Lost in the pronouncements by Biden and his lackeys  that there is no crisis of illegals surging across the border is that fact that COVID-19 is alive and well and spreading in the Northern Triangle and Mexico which is  10th  on my list of deaths from the pandemic  at 2210/M with 346,815 active cases and a fatality rate of 8.33% of closed cases and the 3 countries in the Northern Triangle in terms of active cases and deaths per million are as follows even though the data may be suspect as underreported (regardless of number we need no more cases):
Guatemala:  Active Cases:    4,428 Deaths/M  832
Honduras:    Active Cases: 249,598 Deaths/M 1017
El Salvador:  Active cases:   14,788 Deaths/M  561
US Vaccinations: As of 11/4/2021 425.3 million doses,  1.13 million per day (down to 4 months for 75% of population vaccinated) and in California 161,691  per day  (which means it will take us now less than 1 week to have 75% of the population of California vaccinated which many believe is necessary to develop herd immunity (other than Flip Flop Fauci who may believe that 90% is required).  In California 54,681,532 total doses have been given (85.3%  of doses received to exceed the U.S. average of 81.1%), California has moved from 6th to 5th of the 50 states in terms of the percentage of doses administered as a percentage of doses delivered to the states and at 61.5% of its population fully vaccinated compared to the U.S. average of 58.1% and has moved from 15th to 14th  in terms of getting vaccines received into arms and the percentage of the population fully vaccinated compared to other states.
Non  CV News: Biden apologized at the Glasgow Climate Change Conference for the U.S. pulling out of the Paris Agreement and was mocked by the Chinese who did not attend and who have no intentions of reducing carbon emissions until 2030 while indicating their reductions may be dependent on concessions; alarming report that China will have a 1000 nuclear warheads by 2030 and already has the largest navy; shades of Richard Nixon’s limo being surrounded by angry protestors in Caracas on a state visit as vice president as Senator Manchin’s car in a parking garage is surrounded by angry protestors demanding he vote for Build Back Better national debt busting bill; Durham has moved with speed of a sloth but another indictment and arrest of Igor Danchenko for 5 counts of lying to FBI on the source of material used in the bogus Steele dossier; in another example of the fraying of the strands of civility in the Swamp Senator Gillibrand has released to private phone numbers of members of the Senate to Meghan Markle so she could them as the Duchess of Sussex seeking their support on Build Back Better (how egotistical does this woman believe she is that her opinion carries any weight with senators?); in response to the Biden caused inflation surge, the City Council of West Hollywood, California has just raised the minimum wage to $17.64 the highest in the nation; the House is scheduled to vote soon on the infrastructure bill and the Build Back Better bill which face uncertain future in the House and more importantly in the Senate (sadly the bills have not been scored but it is apparent to most people that the bills are not paid for and will impose a significant increase in the national debt); reports are out that another 60,000 illegal aliens will soon be at the southern border and from the Biden Administration zero attempts to prevent their crossing into the U.S.; in a what’s in the name moment parents protesting CRT being taught to their kids are “domestic terrorist” but drug cartels are not classified as “terrorists”; Biden’s performance at Glasgow falling asleep and otherwise being a disaster would have won the carbon footprint award for having 13 cabinet members and staff with an 85 vehicle conference of SUVs to transport them (Zoom is ok for young kids but not bureaucrats to cut down on carbon emissions); as Blues are still in a state of shock over their political hack Terry McAuliffe losing the race for governor leave it to the political cartoonist to suggest a new state flag memorializing the reasons for the defeat: 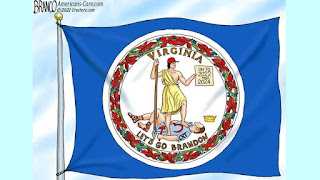 Chicago Gun Violence: Hey Jackass.com is alive and well to collect data to show that through November 3, 2021, gun violence involving mostly persons of color shooting mostly persons of color in Chicago is alive and well with 3955 persons shot of whom 683 have died.
As always, I hope you enjoy today’s holidays and observances, factoids of interest for this day in history, a  music video link to  “Mood”  by 24k Goldn feat. Iann Dior, the fact that MLB players no longer siffilate; and a quote by journalist George Paloczi Horvath on the Hungarian Uprising, secure in the knowledge that if you want to send a gift for any memorable events like Thanksgiving or Veterans  Day, college graduations, birthdays, weddings, or anniversaries, you know that the Alaskanpoet can provide you with a unique customized poem at a great price tailored to the event and the recipient. Please contact me for details on pricing.
1.  Diwali—celebrating a 5-day festival  of lights by Hindis, Sikhs and some Buddhists.
2.  International Stout Day—celebrated on the first Thursday in November since 2014 to promote awareness of the various types of stout beer and promote its consumption. Not sure who created the observance but suspect that Guinness Brewery might have had a role in it.
3. 2020  Number 1 Song USA—the number 1 song in 2020 on this day was “Mood” by 24k Goldn feat. Iann Dior on  a run in that position of 2 weeks to join 19 other  songs that achieved number 1 status  and 11 other acts that achieved their first number 1 song on the Billboard Hot 100. Here’s a music video of “Mood” by 24k Goldn feat. Iann Dior: https://www.youtube.com/watch?
4.  Word of the Day—the word of the day is “siffilate” which means to whistle which Lauren Bacall in To Have and to Hold asked Humphrey Bogart if he knew how to do.
5.  And That’s the Way It Is—celebrating the birth on this day of Walter Cronkite, noted CBS journalist and anchor of CBS Evening News from 1962 until his retirement in 1981 and best remembered for his coverage of the Kennedy assignation, the assignation of Martin Luther King, the Tet Offensive and the first landing on the Moon and also as one of the most trusted men on television which journalists today in the MSM come nowhere near that level of trust.
On this day in:
a. 1922 British archeologist Howard Carter uncovered the tomb of Pharaoh Tutankhamun in the Valley of Kings in Egypt.
b. 1956 Soviet troops invaded Hungary to crush the Hungarian Uprising that had started on October 23, 1956 and when the shootings had ceased on November 11, 1956 some 2500 Hungarian freedom fighters had been killed, thousands wounded while inflicting over 2,000 casualties on the Soviets.
c.  1966 the Arno River in Florence, Italy flooded leaving thousands homeless and destroying countless works of art.
d. 1970 Salvador Allende became president of Argentina, the first Marxist to obtain a presidency of a county in Latin America as a result of an election.
e. 1979 protesting the admission of the Shah into the U.S. for treatment of his cancer, Iranian students seized the U.S. Embassy in Tehran, taking 90 hostages, the last of whom would be released on January 20, 1981 minutes after the inauguration of Ronald Reagan.
Reflections on the Soviet Response to the Hungarian Uprising:  The situation was the same everywhere. Soviet tanks rolled in and started to shoot at every centre of resistance which had defied them during our first battle for freedom.
This time, the Russians shot the buildings to smithereens. Freedom fighters were trapped in the various barracks, public buildings and blocks of flats. The Russians were going to kill them off to the last man. And they knew it. They fought on till death claimed them.
This senseless Russian massacre provoked the second phase of armed resistance. The installation of Kadar's puppet government was only oil on the fire. After our fighting days, after our brief span of liberty and democracy, Kadar's hideous slogans and stupid lies, couched in the hated Stalinite terminology, made everyone's blood boil. Although ten million witnesses knew the contrary, the puppet government brought forward the ludicrous lie that our war of liberty was a counter-revolutionary uprising inspired by a handful of Fascists.
The answer was bitter fighting and a general strike throughout the country. In the old revolutionary centers - the industrial suburbs of Csepel, Ujpest and the rest - the workers struck and fought desperately against the Russian tanks. . .Armed resistance stopped first. The Russians bombarded to rubble every house from which a single shot was fired. The fighting groups realized that further battles would mean the annihilation of the capital. So they stopped fighting.” Report of Hungarian Journalist George Paloczi-Horvath filed with The London Daily Herald
Please enjoy the poems on events of interest on my twitter account below (if you like them, retweet, and follow me) and follow my blogs. Always good, incisive and entertaining poems on my blogs—click on the links below. Go to www.alaskanpoet.blogspot.com for Ridley’s Believe It Or Not—This Day in History,  poems to inspire, touch, emote, elate and enjoy and poems on breaking news items of importance or go to  Ridley's Believe It Or Not for just This Day in History.

Posted by Michael P. Ridley aka the Alaskanpoet at 1:46 PM