RIDLEY’S BELIEVE IT OR NOT November 8, 2021
CV World Cases: The CV pandemic across the planet continues on an increasing basis with cases now over 251 million at 251,002,270 cases,  18,677,817 of which are active, 232,324,453  closed with 227,254,060 recoveries (97.82%), and cracking the 5,000,000 barrier 5,070,393 deaths (2.18% )to continue the low trend of increased cases with increased recovery percentages and decreased death percentages with some plateaus, dips, and rises.
CV USA Cases: Total cases now over 47 million at 47,417,371 with 9,189,965 active cases of which 11,156 are serious or critical, (8,599 on 3/25/2021) (back to steady decreases despite the  Delta variable to .121% of active cases and to increase the reduction from the 29,271 peak on 12/31/2020 to 18,115, 38,227,766 closures with 775,964 deaths (2.03%) and with 37,451,802 recoveries (97.97%). Our death rate percentage is .15% lower than the world’s death rate.
Standing: On a deaths per million population measure on a steady   but slow climb to 2326 the U.S. ranks behind Peru (5967) the new number 1 which has had a quantum leap in deaths previously unmatched which was a change in the classification to give Peru the a new method of reporting to have a fatality rate of 9.26% of total cases now; Bulgaria the new number 2 (3694), Hungary (3261), Brazil (2841) which has been hit with a rapid rise in deaths now slowing down, Romania (2675), Argentina (2538), and newly added to the list Columbia (2472),  and slightly better than Belgium (2241), Mexico (2216), Italy (2195), UK (2075),  Poland (2058), Chile (1959),  Spain (1872),  Ecuador newly added to list (1832),  France (1802), Portugal (1793), Bolivia (1595),  Sweden (1475) that never closed its economy down like we did, and Switzerland (1292).
Tests: No need to tally tests as testing programs are functioning well.
CV Open Gate: Lost in the pronouncements by Biden and his lackeys  that there is no crisis of illegals surging across the border is that fact that COVID-19 is alive and well and spreading in the Northern Triangle and Mexico which is  10th  on my list of deaths from the pandemic  at 2216/M with 347,067 active cases and a fatality rate of 8.33% of closed cases and the 3 countries in the Northern Triangle in terms of active cases and deaths per million are as follows even though the data may be suspect as underreported (regardless of number we need no more cases):
Guatemala:  Active Cases:    3,426 Deaths/M  843
Honduras:    Active Cases: 249,863 Deaths/M 1019
El Salvador:  Active cases:   14,477 Deaths/M  565
US Vaccinations: As of 11/8/2021 432.1 million doses,  1.43 million per day (down to 2 months for 75% of population vaccinated) and in California 187,653  per day  (which means at least 75% of the population of California have received at least one shot which many believe is necessary to develop herd immunity (other than Flip Flop Fauci who may believe that 90% is required).  In California 55,616,757 total doses have been given (85.1%  of doses received to exceed the U.S. average of 81.%), California has moved from 7 to 5th tied with New York of the 50 states in terms of the percentage of doses administered as a percentage of doses delivered to the states and at 61.7% of its population fully vaccinated compared to the U.S. average of 58.3% and has not  moved from 14th   in terms of getting vaccines received into arms and the percentage of the population fully vaccinated compared to other states.
Non  CV News:  Newsom has not been seen in public for 12 days supposedly dealing with family issues which his wife has remained silent on what they might be as he cancelled his trip to the UN Climate Conference which is droning on until November 12; with 70,000 provisional ballots awaiting review and an unknown number of mail-in ballots coming in until Monday and Murphy’s lead being just over 64,000, Republican candidate for governor Ciattarelli is not conceding and is weighing demanding a recount while the Blue State Senator leader Sweeney is not conceding to the truck driver who spent $153 in his campaign as Sweeney is claiming some 2000 votes have mysteriously been found (Ciatterelli is not alleging any fraud at this time); WAPO and its pundits and journalists who praised the Steele Dossier as living proof of Trump collision with Russia must be sweating blood as the Durnham indictments and continuing investigation continue to shed light that the dossier was a fraud and used to perpetrate a fraud on the court; SpaceX which launched 4 astronauts to the ISIS some 200 days ago safely returned them to Earth splashing down in the Gulf of Mexico off the coast of Pensacola, Florida this evening; don’t mess with Nancy is the rule in the House as Red Rep. Marjorie Greene has been hit with 4 fines totally almost $50,000 for not wearing a mask in the House (why if fully vaccinated are we putting up with such nonsense); State Street Global Advisors has thrown meritocracy out the window by judging senior executives on how many women and ethnic minorities they hire for their departments; when spokespersons for the Biden Administration speak good chance they are concealing or distorting the truth first on the payment of $450,000 to illegals separated from their children which was dismissed as garbage only to surface that the DOJ is considering payments amounts of which not determined to its denial that it was considering during rising gas prices shutting down a pipeline running through Michigan to now admitting the shutdown is under consideration by Army Corps of Engineers; State Farm Insurance like a “good neighbor” told the cancel culture warriors wanting Aaron Rodgers punished for his refusal to be vaccinated will not terminate him as a spokesman (good for them); Arlington National Cemetery will commemorate the 100th anniversary of the Tomb of the Unknown Soldier on Veterans Day; Joyless Reid is one angry pseudo “journalist” who can’t accept the fact that blacks can be Red leaders as the political cartoonist vividly portrays her meltdown of the election of Virginia’s first black lieutenant governor: 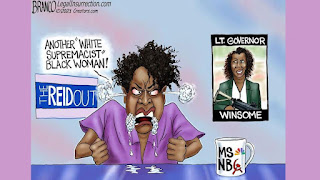 Chicago Gun Violence: Hey Jackass.com is alive and well to collect data to show that through November 7, 2021, gun violence involving mostly persons of color shooting mostly persons of color in Chicago is alive and well with 4021 persons shot of whom 696 have died.
As always, I hope you enjoy today’s holidays and observances, factoids of interest for this day in history, a  recording link to  “The Way You Look Tonight”  by Fred Astaire, the good works of a sillograph; and a quote from Suzanne Fields on HBO and TBS, secure in the knowledge that if you want to send a gift for any memorable events like Thanksgiving or Veterans  Day, college graduations, birthdays, weddings, or anniversaries, you know that the Alaskanpoet can provide you with a unique customized poem at a great price tailored to the event and the recipient. Please contact me for details on pricing.
1.  World Urbanism Day—created by Carlos Maria della Paolera , a professor at the University of Buenos Aires to promote the idea of urban planning as a means of making for more livable places to live, work and socialize.
2.  National S.T.E.A.M Day—created by MGA Entertainment in 2017 to promote science, technology, engineering , art and math in schools and to encourage students especially women to consider them as degree choices. Definitely it should be a high priority item as students in other countries not burdened by the Woke inanity of CRT are eating our lunch in those fields.
3. 1936  Number 1 Song USA—the number 1 song in 1936 on this day was “The Way You Look Tonight” by Fred Astaire on  a run in that position of 6 weeks to join 18 other  songs that achieved number 1 status. Here’s a clip from the film Swing Time of “The Way You Look Tonight” by Fred Astaire:  https://www.youtube.com/watch?v=dIW_Ah0wg-w
4.  Word of the Day—the word of the day is “sillograph which means a writer of satire or lampoons which given animosity running rampant in our divided society today is a profession we need more practitioners in to help us laugh more.
5.  Woman On the Bridge—celebrating the birth on this day in 1952 of Christie Hefner, daughter of Hugh Hefner, who became the president of Playboy Enterprises in 1982 and Chairman of the Board and CEO in 1988 and became the longest serving female CEO of a publicly traded company until she retired in December of 2008 after growing the company to $1 billion in retail sales, 80% of which were to women and left behind an executive staff that was 40% women. Sill active in philanthropy and serving on boards today.
On this day in:
a. 1992 HBO Television was launched in the United States.
b. 1993 the right ear of John Paul Getty III, who had been kidnapped in July, was delivered to his family along with a ransom note of $2.9 million which was ultimately paid to secure his release. His grandfather provided $2.2 million and loaned the rest to John Paul Getty, Jr. Nine people were charged with the kidnapping and 2 were convicted and sent to prison and the ransom money never recovered.
c. 1999 George Miller was shot and killed at his junkyard by George Cassady whose online lover Sharee Miller had convinced him to kill her husband to collect insurance money. In what became known as the first online murder conspiracy she was arrested, tried and convicted and after numerous appeals is serving a life sentence while her on line lover avoided justice by committing suicide.
d. 2002 the UN Security Council unanimously adopted Resolution 1441 demanding Saddam Hussein dismantle his WMD he did not possess and allow weapons inspectors to return to Iraq which they were soon able to do.
e. 2011 in a two close for comfort moment Asteroid 2005 YU55 passed within 201,900 miles of Earth and had it hit, estimates are that if had hit land it would have created a crater 6.3 km in diameter and 516 m deep and generated a 7.0 earthquake.
Reflections on HBO: “HBO has 28 million subscribers, small stuff compared to TBS, which can be seen in 88 million homes.” Suzanne Fields
Please enjoy the poems on events of interest on my twitter account below (if you like them, retweet, and follow me) and follow my blogs. Always good, incisive and entertaining poems on my blogs—click on the links below. Go to www.alaskanpoet.blogspot.com for Ridley’s Believe It Or Not—This Day in History,  poems to inspire, touch, emote, elate and enjoy and poems on breaking news items of importance or go to  Ridley's Believe It Or Not for just This Day in History.

© November 8,2021 Michael P. Ridley aka The Alaskanpoet
Alaskanpoet for Hire, Poems to Admire
Poet Extraordinaire, Beyond Compare
A Unique Gift, All Recipients Receive a Lasting Lift

Posted by Michael P. Ridley aka the Alaskanpoet at 3:41 PM