November 5, 2021 Ridley's Believe It Or Not Diwaldi

CV World Cases: The CV pandemic across the planet continues on an increasing basis with cases now over 249 million at 249,801,570 cases,  18,601,007 of which are active, 231,200,563  closed with 226,148,299 recoveries (97.81%), and cracking the 5,000,000 barrier 5,052,264 deaths (2.19% )to continue the low trend of increased cases with increased recovery percentages and decreased death percentages with some plateaus, dips, and rises.
CV USA Cases: Total cases now over 47 million at 47,258,321 with 9,245,286 active cases of which 11,649 are serious or critical, (8,599 on 3/25/2021) (back to steady decreases despite the  Delta variable to .126% of active cases and to increase the reduction from the 29,271 peak on 12/31/2020 to 17,622, 38,013,035 closures with 773,638 deaths (2.04%) and with 37,239,327 recoveries (97.96%). Our death rate percentage is .15% lower than the world’s death rate.
Standing: On a deaths per million population measure on a steady   but slow climb to 2319 the U.S. ranks behind Peru (5965) the new number 1 which has had a quantum leap in deaths previously unmatched which was a change in the classification to give Peru the a new method of reporting to have a fatality rate of 9.26% of total cases now; Bulgaria the new number 2 (3626), Hungary (3239), Brazil (2839) which has been hit with a rapid rise in deaths now slowing down, Romania (2627), Argentina (2537), and newly added to the list Columbia (2470),  and slightly better than Belgium (2239), Mexico (2211), Italy (2193), UK (2071),  Poland (2011), Chile (1954),  Spain (1871),  Ecuador newly added to list (1832),  France (1801), Portugal (1791), Bolivia (1594),  Sweden (1475) that never closed its economy down like we did, and Switzerland (1291).
Tests: No need to tally tests as testing programs are functioning well.
CV Open Gate: Lost in the pronouncements by Biden and his lackeys  that there is no crisis of illegals surging across the border is that fact that COVID-19 is alive and well and spreading in the Northern Triangle and Mexico which is  10th  on my list of deaths from the pandemic  at 2211/M with 346,815 active cases and a fatality rate of 8.33% of closed cases and the 3 countries in the Northern Triangle in terms of active cases and deaths per million are as follows even though the data may be suspect as underreported (regardless of number we need no more cases):
Guatemala:  Active Cases:    4,054 Deaths/M  835
Honduras:    Active Cases: 249,738 Deaths/M 1018
El Salvador:  Active cases:   14,772 Deaths/M  562
US Vaccinations: As of 11/5/2021 426.7 million doses,  1.10 million per day (down to 3 months for 75% of population vaccinated) and in California 135,278  per day  (which means it will take us now less than 1 week to have 75% of the population of California vaccinated which many believe is necessary to develop herd immunity (other than Flip Flop Fauci who may believe that 90% is required).  In California 54,856,623 total doses have been given (85.0%  of doses received to exceed the U.S. average of 80.8%), California has not moved from 5th of the 50 states in terms of the percentage of doses administered as a percentage of doses delivered to the states and at 61.6% of its population fully vaccinated compared to the U.S. average of 58.2% and has not  moved from 14th  in terms of getting vaccines received into arms and the percentage of the population fully vaccinated compared to other states.
Non  CV News: The House will not be voting on the Build Back Better bill until due to pressure from the dwindling band of moderate Blues the massive spending bill has been scored by the CBO and the fate of the Infrastructure bill is uncertain as some 20 progressive Blues may be voting against it (Biden and the First Lady have canceled their escape to Delaware so Biden can pressure Blues  to vote for the Infrastructure bill); great news for Floridians as Reds now outnumber Blues in the state (looks like the high tax state Blues are staying in their home states and Reds are leaving in droves); a resolution condemning Cuba for its human rights abuses and stifling dissent was passed by the House 382-40 with all no votes coming from progressive Blues (although largely symbolic the 40 votes show where the progressives heads are at); in another example of why Americans are questioning who is running the Oval office, the White House Press Office continues to refuse to answer questions of whether Biden is in the loop considering the payments to illegals lawsuits against the nation purported to be $$450,000 each for damages due to separation of families; Fauci is facing new demands that he resign from PETA due to reports of animal abuse during medical trials (steal a man’s horse or mistreat his dog and one is in hot water which given Fauci’s arrogance and flip flops couldn’t happen to a more deserving person); in what is probably the tip of the espionage iceberg a Chinese spy Yanjun Xu, a 41-year-old Deputy Director of China’s Ministry of State Security was convicted trying to steal GE trade secrets and espionage; Blues mindful of where their donations come from raised deductibility of SALT from $10,000 to $80,000 in the Build America Better; after Chicago’s tax on gun and ammo purchases was ruled to be unconstitutional city’s taxing authorities amended the statue to provide the revenue would used for programs to reduce gun violence and reinstated it; as Blues are still in a state of shock over their political hack Terry McAuliffe losing the race for governor despite tossing at every opportunity the race card despite the election of a black Red Lt. Governor and a black Red AG leave it to the political cartoonist to suggest that that card no longer plays well: 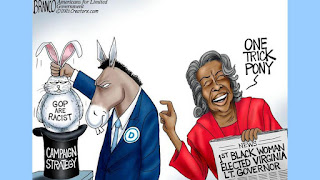 Chicago Gun Violence: Hey Jackass.com is alive and well to collect data to show that through November 4, 2021, gun violence involving mostly persons of color shooting mostly persons of color in Chicago is alive and well with 3958 persons shot of whom 683 have died.
As always, I hope you enjoy today’s holidays and observances, factoids of interest for this day in history, a  music video link to  “Mood”  by 24k Goldn feat. Iann Dior, the fact that MLB players no longer siffilate; and a quote by journalist George Paloczi Horvath on the Hungarian Uprising, secure in the knowledge that if you want to send a gift for any memorable events like Thanksgiving or Veterans  Day, college graduations, birthdays, weddings, or anniversaries, you know that the Alaskanpoet can provide you with a unique customized poem at a great price tailored to the event and the recipient. Please contact me for details on pricing.
1.  Diwali—celebrating a 5-day festival  of lights by Hindis, Sikhs and some Buddhists.
2.  International Stout Day—celebrated on the first Thursday in November since 2014 to promote awareness of the various types of stout beer and promote its consumption. Not sure who created the observance but suspect that Guinness Brewery might have had a role in it.
3. 2020  Number 1 Song USA—the number 1 song in 2020 on this day was “Mood” by 24k Goldn feat. Iann Dior on  a run in that position of 2 weeks to join 19 other  songs that achieved number 1 status  and 11 other acts that achieved their first number 1 song on the Billboard Hot 100. Here’s a music video of “Mood” by 24k Goldn feat. Iann Dior: https://www.youtube.com/watch?
4.  Word of the Day—the word of the day is “siffilate” which means to whistle which Lauren Bacall in To Have and to Hold asked Humphrey Bogart if he knew how to do.
5.  And That’s the Way It Is—celebrating the birth on this day of Walter Cronkite, noted CBS journalist and anchor of CBS Evening News from 1962 until his retirement in 1981 and best remembered for his coverage of the Kennedy assignation, the assignation of Martin Luther King, the Tet Offensive and the first landing on the Moon and also as one of the most trusted men on television which journalists today in the MSM come nowhere near that level of trust.
On this day in:
a. 1922 British archeologist Howard Carter uncovered the tomb of Pharoah Tutankhamun in the Valley of Kings in Egypt.
b. 1956 Soviet troops invaded Hungary to crush the Hungarian Uprising that had started on October 23, 1956 and when the shootings had ceased on November 11, 1956 some 2500 Hungarian freedom fighters had been killed, thousands wounded while inflicting over 2,000 casualties on the Soviets.
c.  1966 the Arno River in Florence, Italy flooded leaving thousands homeless and destroying countless works of art.
d. 1970 Salvador Allende became president of Argentina, the first Marxist to obtain a presidency of a county in Latin America as a result of an election.
e. 1979 protesting the admission of the Shah into the U.S. for treatment of his cancer, Iranian students seized the U.S. Embassy in Tehran, taking 90 hostages, the last of whom would be released on January 20, 1981 minutes after the inauguration of Ronald Reagan.
Reflections on the Soviet Response to the Hungarian Uprising:  The situation was the same everywhere. Soviet tanks rolled in and started to shoot at every centre of resistance which had defied them during our first battle for freedom.
This time, the Russians shot the buildings to smithereens. Freedom fighters were trapped in the various barracks, public buildings and blocks of flats. The Russians were going to kill them off to the last man. And they knew it. They fought on till death claimed them.
This senseless Russian massacre provoked the second phase of armed resistance. The installation of Kadar's puppet government was only oil on the fire. After our fighting days, after our brief span of liberty and democracy, Kadar's hideous slogans and stupid lies, couched in the hated Stalinite terminology, made everyone's blood boil. Although ten million witnesses knew the contrary, the puppet government brought forward the ludicrous lie that our war of liberty was a counter-revolutionary uprising inspired by a handful of Fascists.
The answer was bitter fighting and a general strike throughout the country. In the old revolutionary centers - the industrial suburbs of Csepel, Ujpest and the rest - the workers struck and fought desperately against the Russian tanks. . .Armed resistance stopped first. The Russians bombarded to rubble every house from which a single shot was fired. The fighting groups realized that further battles would mean the annihilation of the capital. So they stopped fighting.” Report of Hungarian Journalist George Paloczi-Horvath filed with The London Daily Herald
Please enjoy the poems on events of interest on my twitter account below (if you like them, retweet, and follow me) and follow my blogs. Always good, incisive and entertaining poems on my blogs—click on the links below. Go to www.alaskanpoet.blogspot.com for Ridley’s Believe It Or Not—This Day in History,  poems to inspire, touch, emote, elate and enjoy and poems on breaking news items of importance or go to  Ridley's Believe It Or Not for just This Day in History.

© November 5,2021 Michael P. Ridley aka The Alaskanpoet
Alaskanpoet for Hire, Poems to Admire
Poet Extraordinaire, Beyond Compare
A Unique Gift, All Recipients Receive a Lasting Lift

Posted by Michael P. Ridley aka the Alaskanpoet at 11:06 AM