September 29, 2021 Ridley's Believe It Or Not World Heart Day

RIDLEY’S BELIEVE IT OR NOT September 29, 2021
CV World Cases: The CV pandemic across the planet continues on an increasing basis with cases now over 233 million at 233,994,141 cases,  18,308,089 of which are active, 215,595,204  closed with 210,808,129 recoveries (97.78%), and 4,787,075 deaths (2.22% )to continue the low trend of increased cases with increased recovery percentages and decreased death percentages with some plateaus, dips, and rises.
CV USA Cases: Total cases now over 44 million at 44,168,010 with 9,864,470 active cases of which 21,047 are serious or critical, (8,599 on 3/25/2021) (back to steady decreases despite the  Delta variant to .213 % of active cases and to increase the reduction from the 29,271 peak on 12/31/2020 to 8,224, 34,303,540 closures with 713,690 deaths (2.08%) and with 33,589,850 recoveries (97.92%). Our death rate percentage is still .14% lower than the world’s death rate.
Standing: On a deaths per million population measure on a steady   but slow climb to 2141 the U.S. ranks behind Peru (5943) the new number 1 which has had a quantum leap in deaths previously unmatched which was a change in the classification to give Peru the a new method of reporting to have a fatality rate of 9.26% of total cases now; Hungary the new number 2 has had a huge continuing surge in deaths with the increase now slowing down and improving slightly to  3.77% of its closed cases have died (3135), aping Hungary in terms of increase in deaths Bulgaria (2024),   Brazil (2780) which has been hit with a rapid rise in deaths and cases and passed us and Italy, Argentina (2519),  Columbia newly added to the list  (2449),   Belgium (2195), and Italy (2168), and slightly better than Mexico (2116), Poland (2001), UK (1998),  Chile (1939), Romania (1932), Spain (1847),  Ecuador newly added to list (1823),  France (1782), Portugal (1769), Bolivia (1577),  Sweden (1456) that never closed its economy down like we did, and Switzerland (1270). As vaccine mandate hysteria grows in the U.S., if you are infected you have a 1.615% chance of dying and if you are over 65 the percentages of deaths for that group is 78%.
Tests: We have now conducted 639,601,967 tests (1,918,330/M) just passed by France at 2,128,349 who is now 1st  on a per capital basis for all nations (other than those nations that contain small populations like Bahrain, Denmark, Israel, Malta, Singapore and UAE) other than the U.K. which remains as king of the mountain with respect to tests at 4,423,574/M.
CV Open Gate: Lost in the pronouncements by Biden and his lackeys  that there is no crisis of illegals surging across the border is that fact that COVID-19 is alive and well and spreading in the Northern Triangle and Mexico which has been passed by Argentina and newly added Columbia but passed the UK  to drop to 10th  on my list of deaths from the pandemic  at 2116/M with a fatality rate of 8.44% of closed cases and the 3 countries in the Northern Triangle in terms of active cases and deaths per million are as follows even though the data may be suspect as underreported (regardless of number we need no more cases):
Guatemala:  Active Cases:  28,302 Deaths/M 738
Honduras:    Active Cases: 245,552 Deaths/M 966
El Salvador:  Active cases:   14,275 Deaths/M 494
US Vaccinations: As of 9/29/2021 392.0 million doses,  .707 million per day (down to 4 months for 75% of population vaccinated) and in California 87,672  per day  (which means if the rate does not increase it will take us now only  some 3 months to have 75% of the population of California vaccinated which many believe is necessary to develop herd immunity (other than Flip Flop Fauci who may believe that 90% is required).  In California 50,546,180 total doses have been given (86.7%  of doses received to exceed the U.S. average of 82.8%), California has not oved  moved from 7th  of the 50 states in terms of the percentage of doses administered as a percentage of doses delivered to the states and at 58.9% of its population fully vaccinated compared to the U.S. average of 55.9% and has   moved  from 15th place to 13th place as a percentage of the population fully vaccinated. A  long way to go still to get herd immunity in terms of getting vaccines received into arms and the percentage of the population fully vaccinated compared to other states which means a great reason to recall this inept and hypocritical governor.
Non  CV News: Senator Manchin has indicated in no uncertain terms he will not vote for Biden’s $3.5 to 5+ fiscal insanity plan; Psaki who lies almost of reflex the most recent being the border is closed (maybe to those crossing legally at Del Rio International Bridge but a lie for the thousands crossing the river illegally) has finally walked back her lie that the Biden’s $3.5 million boondoggle will have zero cost because it will be paid for by the rich and wealthy corporations that are not paying their “fair share”; MSNBC “journalist” Chris Hayes was in a major snit fit meltdown over Manchin’s refusal to back Biden’s fiscal insanity scaring the living daylights over his diminished band of watchers claiming we are going to die it the bill is not passed; Biden made a surprise appearance at the annual Congressional Baseball to be booed by many of the fans in attendance and then named to the games Hall of Fame; in the era of smart phone cameras politicians guilty of hypocrisy run a great risk as Governor McAuliffe in a close race and a proponent of mask laws was caught on a Amtrak train maskless in front of a placard reminding passengers to wear masks; Brittaney Spears received the great news that her father’s conservatorship over her had ended; the Biden Administration is dragging its feet again on reinstating the requirement that asylum seekers remain in Mexico until their cases are heard (that is too lenient and asylum seekers which are primarily of an economic nature and will be refused should require the asylum seekers seek asylum in their own country after filing their petition  at the American consulate there); as Biden thank God appears to be coming up on a stone wall of resistance on his $3.5 trillion plus reconciliation bill, leave it to the political cartoonist to portray the inability to make a silk purse out or a sow’s ear: 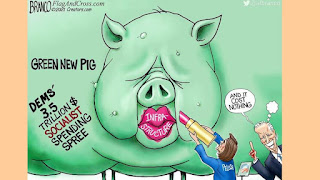 Chicago Gun Violence: Hey Jackass.com is alive and well to collect data to show that through September 28, 2021, gun violence involving mostly persons of color shooting mostly persons of color in Chicago is alive and well with 3549 persons shot of whom 613 have died.
As always, I hope you enjoy today’s holidays and observances, factoids of interest for this day in history, a  music video link to  “One More Night”  by Maroon 5, the fact that meteorologists use sferics in their forecasting work and a quote by Michael Melville on private enterprise compared to the government, secure in the knowledge that if you want to send a gift for any memorable events like Halloween or Veterans  Day, college graduations, birthdays, weddings, or anniversaries, you know that the Alaskanpoet can provide you with a unique customized poem at a great price tailored to the event and the recipient. Please contact me for details on pricing.

1.  World Heart Day—created by the World Health Organization and the World Heart Federation in 1999 and first observed in 2000 to promote awareness of heart disease and the means of prevention.
2.  National Women’s Health and Fitness Day--created by the Health Information Resource Center in  in 2001 and celebrated on the last Wednesday in September since 2002 to promote awareness in women for the need for physical exercise and healthy lifestyles.
3. 2012  Number 1 Song USA—the number 1 song in 2012 on this day was “One More Night”  Maroon 5  on  a run in that position of 9 weeks to join 11 other  songs that achieved number 1 status  as 6  acts  achieved their first number 1 song on the Billboard Hot 100. Here is a music video of “One More Night” by Maroon 5:  https://www.youtube.com/watch?v=fwK7ggA3-bU.
4.  Word of the Day—the word of the day is “sferics” which means the study of storms using electrical detectors which makes weather  forecasting and storm alerts more reliable which in an era of potential climate change is a good trend.
5.  Should Have Paid More Attention to the Doctors Played-- celebrating the birth on this day in 1939 of noted TV actor and big screen actor Larry Linville who often was cast in the role of doctors and is best remembered for his role as Major Frank Burns on M*A*S*H who in real life was a heavy drinker and smoker and who came down with lung cancer and died from complications following surgery from removing part of his lung on April 10, 2000.
On this day in:
a. 1789 the U.S. Department of War established a regular army of several hundred men leaving the state militias to be looked to for the defense of the nation.
b. 1923 the first American Women’s Track and Field Championships were held in Weeqhauhic Park, Newark, New Jersey with 11 events with the longest race, one hundred yards, and no basketball or softball but a basketball toss and a softball toss.
c. 1975 WGPR became the nation’s  first black owned TV station operating in Detroit until it was acquired by CBS in 1995.
d. 1990 construction of the Washington National Cathedral in Washington, D.C. that started on this day in 1907 with the laying of the cornerstone was completed.
e. 2004 Burt Rutan’s SpaceShipOne, the first privately funded space ship made a successful suborbital flight into space reaching an altitude of 102.93 km which qualified for the 1st of 2 space flights needed to qualify for the Ansari X Prize of $10 million payable to the first reusable spaceship, privately funded capable 3 people over 100 km into space and replicating the feat within 2 weeks thereafter which was accomplished on October 4, 2004.
Reflections on private enterprise and space travel: “ Private enterprise can do things in many ways much more efficiently, ... As small as we are and as little money as we had, we did amazing things.” Mike Melville the pilot of SpaceShipOne Sadly truer words were never more spoken as one looks at the waste in the Swamp and far too many state capitals.
Please enjoy the poems on events of interest on my twitter account below (if you like them, retweet, and follow me) and follow my blogs. Always good, incisive and entertaining poems on my blogs—click on the links below. Go to www.alaskanpoet.blogspot.com for Ridley’s Believe It Or Not—This Day in History,  poems to inspire, touch, emote, elate and enjoy and poems on breaking news items of importance or go to  Ridley's Believe It Or Not for just This Day in History.

© September 29, 2021 Michael P. Ridley aka The Alaskanpoet
Alaskanpoet for Hire, Poems to Admire
Poet Extraordinaire, Beyond Compare
A Unique Gift, All Recipients Receive a Lasting Lift


Posted by Michael P. Ridley aka the Alaskanpoet at 1:30 PM