September 21, 2021 Ridley's Believe It Or Not World Alzheimer's Day

CV World Cases: The CV pandemic across the planet continues on an increasing basis with cases now over 229 million at 229,563,517 cases,  18,589,902 of which are active, 210,973,615  closed with 206,264,188 recoveries (97.77%), and 4,709,427 deaths (2.23% )to continue the low trend of increased cases with increased recovery percentages and decreased death percentages with some plateaus, dips, and rises.
CV USA Cases: Total cases now over 42 million at 42,912,833 with 9,709,614 active cases of which 24,330 are serious or critical, (8,599 on 3/25/2021) (back to slight decrease despite the  Delta variant to .251 % of active cases and to increase the reduction from the 29,271 peak on 12/31/2020 to 4,941, 33,203,219 closures with 692,012 deaths (2.08%) and with 32,511,207 recoveries (97.92%). Our death rate percentage is still .15% lower than the world’s death rate.
Standing: On a deaths per million population measure on a steady   but slow climb to 2076 the U.S. ranks behind Peru (5935) the new number 1 which has had a quantum leap in deaths previously unmatched which was a change in the classification to give Peru the a new method of reporting to have a fatality rate of 9.26% of total cases now; Hungary the new number 2 has had a huge continuing surge in deaths with the increase now slowing down and improving slightly to  3.77% of its closed cases have died (3129), aping Hungary in terms of increase in deaths Bulgaria (2909),   Brazil (2756) which has been hit with a rapid rise in deaths and cases and passed us and Italy, Argentina (2504),  Columbia newly added to the list  (2443),   Belgium (2188), Italy (2160), and Mexico (2079) and slightly better than Poland (1997), UK (19806),  Chile (1935), Romania (1865), Spain (1836),  Ecuador newly added to list (1818),  France (1773), Portugal (1763), Bolivia (15720),  Sweden (1448) that never closed its economy down like we did, and Switzerland (1261). As vaccine mandate hysteria grows in the U.S., if you are infected you have a 1.614% chance of dying and if you are over 65 the percentages of deaths for that group is 78%.
Tests: We have now conducted 619,923,111 tests (1,859,603/M) just passed by France at 2,096,319 who is now 1st  on a per capital basis for all nations (other than those nations that contain small populations like Bahrain, Denmark, Israel, Malta, Singapore and UAE) other than the U.K. which remains as king of the mountain with respect to tests at 4,285,246/M.
CV Open Gate: Lost in the pronouncements by Biden and his lackeys  that there is no crisis of illegals surging across the border is that fact that COVID-19 is alive and well and spreading in the Northern Triangle and Mexico which has been passed by Argentina and newly added Columbia but passed the UK  to drop to 10th  on my list of deaths from the pandemic  at 2079/M with a fatality rate of 8.49% of closed cases and the 3 countries in the Northern Triangle in terms of active cases and deaths per million are as follows even though the data may be suspect as underreported (regardless of number we need no more cases):
Guatemala:  Active Cases:  37,771 Deaths/M 712
Honduras:    Active Cases: 239,901 Deaths/M 940
El Salvador:  Active cases:   13,929 Deaths/M 477
US Vaccinations: As of 9/16/ 2021 383.0 million doses,  .782 million per day (down to 4 months for 75% of population vaccinated) and in California 88,524  per day  (which means if the rate does not increase it will take us still some 3 months to have 75% of the population of California vaccinated which many believe is necessary to develop herd immunity (other than Flip Flop Fauci who may believe that 90% is required).  In California 49,388,384 total doses have been given (86.5%  of doses received to exceed the U.S. average of 83.0%), but due to the pressure of a recall vote for which ends today, California has  moved from  9th to 10th  of the 50 states in terms of the percentage of doses administered as a percentage of doses delivered to the states and at 57.5% of its population fully vaccinated compared to the U.S. average of 54.2% and has  moved down from 15th place to 16th place as a percentage of the population fully vaccinated. A  long way to go still to get herd immunity in terms of getting vaccines received into arms and the percentage of the population fully vaccinated compared to other states which means a great reason to recall this inept and hypocritical governor.
Non  CV News: the autopsy of Gabby Petito has confirmed her death was a homicide and now the FBI and Florida police have shifted to the probable killer, her fiancée Brian Laundrie who has been missing for several days; Boris Johnson and Biden met at the White House with British and American members of the press present; Johnson took several questions from the British press but Biden trying to conceal his growing cognitive failings refused to take questions from our press (wave goodbye to any claim of transparency); once again the Biden Administration is lying through their teeth with a couple of planes loaded with Haitians flown out to create the false narrative illegals are being deported while bus load after bus load of illegals are being transported into the interior with notices to appear in immigration court (good luck with compliance on that); the House clearing the deck for the trillions Biden wants to spend that we cannot afford have raised the debt ceiling on a straight party line vote 220-211; the progressives flexed their power and funding for Israel’s Iron Dome was scrapped from an emergency funding bill but Majority Leader Hoyer in a go pound sand move announced he will announce a separate bill which one would think all he had to do is walk across the aisle to get more that the votes needed; our dementia afflicted president is looking more and more like a puppet with his aides pulling the strings as we now learn that his aides hustled the press out of the room as his meeting with Boris Johnson ended but also shouted down the questions the press tried to ask; SEC Chairman Gary Gensler opined that he does not see a long term future for crypto currency;  with the CBP overwhelmed by a growing tidal wave of illegals leave it to the political cartoonist to point out graphically the failures of Biden’s immigration policy: 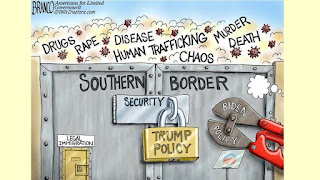 Chicago Gun Violence: Hey Jackass.com is alive and well to collect data to show that through September 20, 2021, gun violence involving mostly persons of color shooting mostly persons of color in Chicago is alive and well with 3409 persons shot of whom 582 have died.
As always, I hope you enjoy today’s holidays and observances, factoids of interest for this day in history, a  music recording link to  “Teenage Dream”  by Katy Perry, a Sunday sermuncle  and a quote by Pat Summit on Alzheimer’s, secure in the knowledge that if you want to send a gift for any memorable events like Halloween or Veterans  Day, college graduations, birthdays, weddings, or anniversaries, you know that the Alaskanpoet can provide you with a unique customized poem at a great price tailored to the event and the recipient. Please contact me for details on pricing.
1.  International Day of Peace—created by the UN in 1981 to promote peace and celebrate the absence of war and violence even if such absence if temporary in the form of a cease fire for humanitarian aid.
2.  World Alzheimer’s  Day—clueless of who created this or when but this is a disease the that is the 6th leading killer of Americans, 1 of whom is stricken every 65 seconds and of the top 10 diseases in terms of mortality it is the only one that cannot be treated or prevented and with our population aging is going to place a tremendous strain on our health care system and the family members of the patients.
3. 2010  Number 1 Song USA—the number 1 song in 2010 on this day was “Teenage Dream” by Katy Perry on  a run in that position of 2 weeks to join 16 other songs that achieved number 1 status  as 9  acts  achieved their first number 1 song on the Billboard Hot 100. Here is a music video of “Teenage Dream” by Katy Perry: https://www.youtube.com/watch?v=98WtmW-lfeE    Katy has been performing since 2001 and rose to fame with her second album in 2008 and has gone on to sell 143 million records and going strong at age 36.

4.  Word of the Day—the word of the day is “sermuncle” which means a short sermon which is often music to churchgoers ears.
5.  Torpedoed by the Feds and the Big C-- celebrating the birth on this day in 1903 of Preston Tucker, noted automotive entrepreneur who founded Tucker Motors to design and produce a revolutionary car many of whose features were later incorporated later on by automobile manufacturers called the “Tucker Torpedo.” He ran afoul of the SEC due to his fundraising methods and was prosecuted for securities fraud and acquitted but company was forced into bankruptcy and the car never entered into production. Tucker was a heavy smoker and like so many heavy smokers contracted lung cancer and died way too soon from it on December 26, 1956, at the age of 53.

On this day in:
a. 1780 Benedict Arnold’s name became synonymous with traitor as he delivered the plans of West Point to the British.
b. 1972 Ferdinand Marcos declared martial law in the Philippines which remained in place until he lost a snap election in 1986 and under strong pressure from President Reagan, fled the country after stealing a reputed $5-10 billion from the Philippine treasury.
c. 1981 Sandra Day O’Connor was unanimously confirmed by the Senate as an Associate Justice of SCOTUS.
d. 1996 the Defense of Marriage Act was enacted only to be overturned by SCOTUS less than 10 years later.
e. 2001 in a chilling reminder that whites do not have a monopoly on racism, white Ross Parker was attacked and killed in an unprovoked attack by 10 British Pakistani youths, 3 of which were convicted and sentenced to life in prison with minimum sentences of 16-18 years.
Reflections on Alzheimer’s Disease: “Have you ever walked along a shoreline, only to have your footprints washed away? That's what Alzheimer's is like. The waves erase the marks we leave behind, all the sandcastles. Some days are better than others.” Pat Summit, noted woman’s basketball player and coach of the Lady Vols of the University of Tennessee who 8 NCAA finals and held the record when she retired early in 2012 after 38 years  due to early onset Alzheimer’s for most wins at 1098 which was surpassed by Stanford coach Tara van der Vere (1125) and UConn coach Geno Auriemma (1019).
Please enjoy the poems on events of interest on my twitter account below (if you like them, retweet, and follow me) and follow my blogs. Always good, incisive and entertaining poems on my blogs—click on the links below. Go to www.alaskanpoet.blogspot.com for Ridley’s Believe It Or Not—This Day in History,  poems to inspire, touch, emote, elate and enjoy and poems on breaking news items of importance or go to  Ridley's Believe It Or Not for just This Day in History.

© September 210, 2021 Michael P. Ridley aka The Alaskanpoet
Alaskanpoet for Hire, Poems to Admire
Poet Extraordinaire, Beyond Compare
A Unique Gift, All Recipients Receive a Lasting Lift

Posted by Michael P. Ridley aka the Alaskanpoet at 12:52 PM