Biden's Bridge Disaster at the Border

Certain bridges have been etched in literature or the political sound bites
Arnhem was the “Bridge Too Far” as the Brits were defeated in their Market Garden gamble fight
The Edmund Pettus in Selma on a Sunday with blood was covered red
The Brooklyn Bridge the buyer beware as from a fool his money would be shed
The “Bridge to Nowhere” was Stevens’ 398 million pork bridge to Gravina Island that never went ahead
Chris Cristy’s closing 2 lanes of the George Washington Bridge viewed as a punishment of the mayor of Fort Lee
MSM pounced on him with a “Bridgegate Label” in a politically devastating spree
But the latest bridge to make the news as a political disaster takes the cake
Not the bridge itself but the people under it that are causing voters to realize they made a big mistake
Under the Del Rio International Bridge thousands of illegals mostly Haitians have pitched camp
A glaring example of Biden’s border failures as the number of illegals on an upward ramp
Transparency for the Biden Administration means you can see only what they want you to view
When Fox hired a drone to film the thousands camped out the FAA grounded it so it no longer flew
Majorakis touted the Haitians would be removed and two planes flew a few out
But in the dark of night or away from cameras illegals on busses into the interior continued to mount
Blues are desperate to divert attention from the open border with drugs, trafficking, and bogus asylum claims the rule the day
Racist and inhuman claims for on CBP on horses not whipping the illegals but with their horses blocking their way
Time to ignore such fake news claims and add to the bridge list “Biden’s Bridge Disaster”
Clear photo evidence he is incapable or refuses to illegal alien surge master: 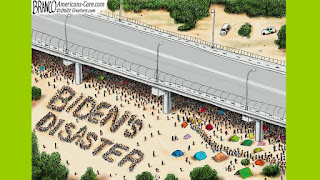 Posted by Michael P. Ridley aka the Alaskanpoet at 9:30 PM