November 26, 2021 Ridley's Believe It Or Not Black Friday

RIDLEY’S BELIEVE IT OR NOT November 26, 2021
CV World Cases: The CV pandemic across the planet continues on an increasing basis with cases now over 260 million at 260,661,997 cases,  19,923,313 of which are active, 240,738,684  closed with 235,534,879 recoveries (97.84%), and cracking the 5,000,000 barrier 5,203,809 deaths (2.16% )to continue the low trend of increased cases with increased recovery percentages and decreased death percentages with some plateaus, dips, and rises.
CV USA Cases: Total cases now over 48 million at 48,978,500 with 9,392,415 active cases of which 12,248  are serious or critical, (8,599 on 3/25/2021) (back to steady decreases with upticks despite the  Delta variable to .130% of active cases and to decrease the reduction from the 29,271 peak on 12/31/2020 to 17,023, 39,586,085 closures with 798,391 deaths (2.02%) and with 38,787,694 recoveries (97.98%). Our death rate percentage is .14% lower than the world’s death rate.
Standing: On a deaths per million population measure on a steady   but slow climb to 2392 the U.S. ranks behind Peru (5979) the new number 1 which has had a quantum leap in deaths previously unmatched which was a change in the classification to give Peru the a new method of reporting; Bulgaria the new number 2 (4040), Hungary (3501), Romania (2929), Brazil (2858) which has been hit with a rapid rise in deaths now slowing down passed by Romania, Argentina (2544), and newly added to the list Columbia (2483),  and slightly better than Belgium (2294), Mexico (2241), Italy (2212), Poland (2175), UK (2112),  Chile (1976),  Spain (1879),  Ecuador newly added to list (1839),  France (1813), Portugal (1810), Bolivia (1605),  Sweden (1483) that never closed its economy down like we did, and Switzerland (1311).
Tests: No need to tally tests as testing programs are functioning well.
CV Open Gate: Lost in the pronouncements by Biden and his lackeys  that there is no crisis of illegals surging across the border is that fact that COVID-19 is alive and well and spreading in the Northern Triangle and Mexico which is  10th  on my list of deaths from the pandemic  at 2241/M with 344,876 active cases and a fatality rate of 8.32% of closed cases and the 3 countries in the Northern Triangle in terms of active cases and deaths per million are as follows even though the data may be suspect as underreported (regardless of number we need no more cases):
Guatemala:  Active Cases:     1965  Deaths/M  865
Honduras:    Active Cases: 247,175  Deaths/M 1027
El Salvador:  Active cases:   13,185  Deaths/M  576
US Vaccinations: As of 11/25/2021 454.4 million doses,  1.76 million per day (4 weeks left for 75% of population to be vaccinated) and in California 230,653  per day  (which means at least 78% of the population of California has received at least one shot which many believe is necessary to develop herd immunity (other than Flip Flop Fauci who may believe that 90% is required).  In California 58,715,000 total doses have been given (83.4%  of doses received to exceed the U.S. average of 79.5%), California has not moved from  6th of the 50 states in terms of the percentage of doses administered as a percentage of doses delivered to the states and at 62.8% of its population fully vaccinated compared to the U.S. average of 59.1% and has  moved from 11th to 14th  in terms of the percentage of the population fully vaccinated compared to other states.
Non  CV News:  The news out of South Africa is not good with a new COVID-19 variant known as B.1.1.529 which has the WHO calling an emergency session to discuss its impact on the pandemic (look for it to be called the South Africa variant from a country that unlike China has been fully cooperating in terms revealing and releasing data); BLM needs to change its acronym to ILM (Indian Lands Matter) as it tweeted rants about solen Indian land on Thanksgiving (already marginalized by its refusal to protest the thousands of blacks shot and killed not by the rare few by police but by fellow blacks in urban areas); the FBI which has been more like the Federal Bungling Investigation may be shifting from its inane focus on focusing on parents protesting CRT teaching in the schools to that of the “Havana Syndrome” the causes of which have as of yet not been determined; Pete Buttigieg whose mayoral experience as a former  South Bend Mayor hardly makes him presidential timber appears to becoming the MSM’s new new target of its sycophantic praise as he is getting warm praise as Biden’s popularity and ability to handle issues continues to be flushed down the toilet; Biden is touting on Thanksgiving that “America is back” when the only back we see if his as he dotters slowly away for a podium without taking questions (his handlers’  strategy of minimizing the chances of his displaying his cognitive deterioration to the American public); in what hopefully be the first of many steps returning to Trump policies that worked, Biden is going to ban travel to and from South Africa and other South African countries, an action when Trump applied it to China he ravaged him for being xenophobic; from the left our political system is under massive assault by dark money groups to the tune of $1.6 billion in 2020 (while money is pouring in a few on the left are railing against the process); as more and more revelations on the extent of the MSM promoting the false narrative of the non existent Trump Russian collusion, a noted liberal writer Aaron Maté has blasted the false journalism which after the cows have left the barn and we are stuck with Biden has been forced to rewrite numerous false article which have devastated journalistic integrity; Black Friday used to be celebrated as the day retail merchants finally ended the cumulative days of red ink to land on being in the black for the rest of the year but now sadly means massive shoplifting by gangs of shoplifters many of whom are most likely black; while the people in Venezuela are starving leave it to the political cartoonist to show who is not suffering in the slightest in the same way our Blue elites are impervious to the inflation that Biden has caused: 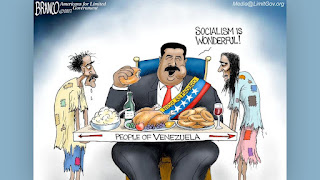 Chicago Gun Violence: Hey Jackass.com is alive and well to collect data to show that through November 25, 2021, gun violence involving mostly persons of color shooting mostly persons of color in Chicago is alive and well with 4198 persons shot of whom 734 have died.
As always, I hope you enjoy today’s holidays and observances, factoids of interest for this day in history,  recording links “Do They Know Its Christmas” by Band Aid and “Piano Concerto in B Flat” by Fred Martin and His Orchestra, the fact that you far removed from being a Sinophile and opposing quotes on HUAC’s investigation of the Hollywood 10 by J. Parnell Thomas and the Hollywood 10, secure in the knowledge that if you want to send a gift for any memorable events like Thanksgiving or Veterans  Day, college graduations, birthdays, weddings, or anniversaries, you know that the Alaskanpoet can provide you with a unique customized poem at a great price tailored to the event and the recipient. Please contact me for details on pricing.
1.  Black Friday—celebrating the flock of shoppers that descended on retailers the day after Thanksgiving and designated by the police in Philadelphia first in 1961 to describe the increase in traffic and shoppers clogging the sidewalks going into retail outlets and now heralded as the day that most retailers are no longer in the red ink but have become profitable for the rest of the year.
2.  Turkeyless Thanksgiving—clueless who or when created this observance which is not to promote a vegetarian or vegan Thanksgiving but to promote a different meat as the main course such as duck, geese, prime rib, or seafood to more closely ape the first Thanksgiving by the Pilgrims in 1621 which consisted of deer, geese, duck, pigeons, bass and cod and flint (a variety of corn grown by the local Indians); if you want to keep the turkey but adhere to some seafood, stuff the turkey with wild rice oyster stuffing.

3.  1941  Number 1 Song USA—the number 1 song in 1941 on this day was “Piano Concerto in B Flat” by Freddy Martin and His Orchestra on a run of 8 weeks in that position to join 10 other songs that achieved number 1 status . Here’s a recording of Freddy Martin and  His Orchestra performing “Piano Concerto in B Flat: https://www.youtube.com/watch?v=ckgH8UlIu1k

4.  Word of the Day—the word of the day is “Sinophile” which means someone of admires China which after its involvement with COVID-19, its abuse of human rights and its desire to supplant the U.S. as a leading power whose numbers given China’s behavior are shrinking dramatically.
5.  Doing What You Love To Do When the Time Comes—celebrating the birth on this day in 1951 of noted singer/songwriter Bill Morrisey who was a heavy smoker and drinker and who while on a musical tour of the South died of heart disease on July 23, 2011 at age 59.
On this day in:
a. 1947 the members of the Hollywood Ten were blacklisted by the movie studios.
b. 1984 36 top musicians gathered at a Notting Hill studio to record Band Aid’s “Do They Know It’s Christmas” to raise money for famine relief in Ethiopia which in the first 12 months following its release raised £ 8 million: https://www.youtube.com/watch?v=j3fSknbR7Y4
c. 1986 Attorney Edwin Meese admitted the proceeds of covert arms sales to Iran were funneled to the Contra Rebels fighting the Sandinistas in Nicaragua.
d. 1992 the Federal Assembly of Czechoslovakia voted to split the country in 2 to the Czech Republic and Slovakia effective January 1, 1993.
e. 1999 a 5 year old boy Elian Gonzales, floating in an inner tube off the coast of Florida after the boat that he, his mother and Cubans fleeing Cuba sank, was rescued by 2 fisherman which prompted competing lawsuits by his great uncle in the U.S. and his Cuban father in Cuba for custody which was determined in the father’s favor prompting a predawn raid to remove him when his relatives in the U.S. refused to turn him over: 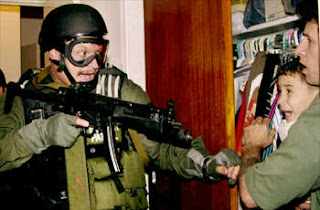 Reflections on HUAC and its contempt of Congress leading to the Blacklist: “The Constitution was never intended to cloak or shield those who would destroy it.” J. Parnell Thomas, Chairman of HUAC  “The United States can keep its constitutional liberties or it can keep the Thomas committee. It can’t keep both.” The Hollywood Ten. Sadly today conservatives have become the Hollywood 10 and the Social Media Giants like Facebook and Twitter have become HUAC
Please enjoy the poems on events of interest on my twitter account below (if you like them, retweet, and follow me) and follow my blogs. Always good, incisive and entertaining poems on my blogs—click on the links below. Go to www.alaskanpoet.blogspot.com for Ridley’s Believe It Or Not—This Day in History,  poems to inspire, touch, emote, elate and enjoy and poems on breaking news items of importance or go to  Ridley's Believe It Or Not for just This Day in History.

© November 26, 2021 Michael P. Ridley aka The Alaskanpoet
Alaskanpoet for Hire, Poems to Admire
Poet Extraordinaire, Beyond Compare
A Unique Gift, All Recipients Receive a Lasting Lift

Posted by Michael P. Ridley aka the Alaskanpoet at 4:06 PM