Christmas is supposed to be a time for with family and friends a time to bask in the Christmas spirit and the gift of peace
Today is not what the Magi had in mind when they came with to the manger their three gifts
Despite vaccinations and booster shots that have soared infection rate not going down but on an increase
The malls and streets seen somewhat barren of shoppers as from empty shelves to empty shelves buyers drift
In New York City in Fox Square a 50 foot lit and decorated Christmas Tree was burned down
True to the victims last thugs and felons first
The arsonist was set free to wander around the town
Another example of the left’s no bail equity enhancement curse
Printing money at warp speed to cover the fed’s massive spending spree
Releasing the inflation beast from its pre Biden sound sleep
Policies on energy that jacked up gas prices and made independence history
Stripping low and middle class incomes to be able food on the table keep
A border with record numbers of illiterate and unvaccinated or infected aliens in a surge
And waves of smash and grab locusts stripping shelves bare
Rarely arrested and if so not prosecuted or without bail from the jail cells purged
No wonder the sounds of carolers are missing and the gifts of peace no longer there to share
Standing on a roof a Santa without a “Merry Christmas—Ho, Ho, Ho
But fed up over the chaos and letting go 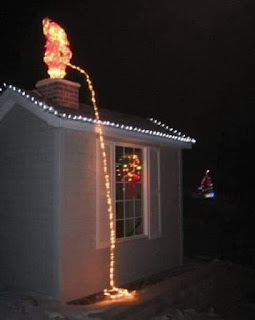 Posted by Michael P. Ridley aka the Alaskanpoet at 4:32 PM