December 8, 2021 Ridley's Believe It Or Not National Christmas Tree Day

CV World Cases: The CV pandemic across the planet continues on an increasing basis with cases now over 266 million at 267,805,808 cases,  21,357,353 of which are active, 246,448,235  closed with 241,156,053 recoveries (97.85%), and cracking the 5,000,000 barrier 5,292,182 deaths (2.15% ))to continue the low trend of increased cases with increased recovery percentages and decreased death percentages with some plateaus, dips, and rises.
CV USA Cases: Total cases now over 50 million at 50,284,360 with 9,724,088 active cases  (serious or critical cases no longer reported), 40,560,352 closures with 812,402 deaths (2.00%) and with 39,747,950 recoveries (98.00%). Our death rate percentage is .15% lower than the world’s death rate.
Standing: On a deaths per million population measure on a steady but slow climb to 2454 but comparable death rates no longer in easy to report country by country tables)
Tests: No need to tally tests as testing programs are functioning well.
US Vaccinations: As of 12/08/21 473.2 million doses,  1.67 million per day over last week (4 weeks left for 75% of population to be vaccinated) and in California 216,717  per day  (which means at least 80% of the population of California has received at least one shot which many believe is necessary to develop herd immunity (other than Flip Flop Fauci who may believe that 90% is required).  In California 61,199,872 total doses have been given (85.6%  of doses received to exceed the U.S. average of 81.4%), California has not moved from  8th of the 50 states in terms of the percentage of doses administered as a percentage of doses delivered to the states and at 64.1% of its population fully vaccinated compared to the U.S. average of 60.1% and has  moved from 14th to 13th  in terms of the percentage of the population fully vaccinated compared to other states.
Non  CV News:  The trial of Officer Kim Potter for the killing of Daunte Wright has started with his mother taking the stand as the first witness who will probably portray him as an angel as a 22 year woman gave an interview with Fox about Wright’s attempted armed robbery of her at her apartment when she let him and his friend Driver stay in her living room overnight and Wright pointed a gun in her face and demand the rent money she was hiding in her bra; criminal charges were filed against the two with Wright’s dismissed on his death and Driver pled guilty to armed robbery and typical of the failure of our criminal justice system even though it was his second felony he received probation only and is still on the streets (wonder how much of that testimony the interviewee would be able to deliver to the jury); Al Sharpton who is Johnny on the spot whenever there is notable police shooting of a black to stoke the fires of anger and riot potential is also the green scofflaw who gets on of his wealthy black supporters to loan him the use of their private jet to arrive as he did at the funeral of Daunte Wright to deliver a eulogy; Scott Peterson who was sentenced to death in 2004 for the murder of his pregnant wife and his unborn son, and dodged the deadly injection needle in August 2020 when the court overturned his death sentence but not his conviction was resentenced to life without possibility of parole so he will rot in prison no longer on death row;  Jussee Smollett’s fate is now in the hands of the jury as they have stared deliberations; HRC once again shows she will never get over her coronation loss and place the blame on her own policies, unlikability, deception, dishonesty and arrogance that the election given the support of the MSM was really a coronation not an election blaming sexism, misogyny, voter ID and James Comey who should have recommended indictment for her private server and classified information and her efforts to bamboozle the electorate over the false Steele dossier (she really needs to disappear with her dog and wallow in her bitterness away from the public eye); former Mayor Landrieu of New Orleans who is the new infrastructure czar to oversee the implementation of the $1.2 trillion infrastructure bill has promised to focus on climate and “equity” instead of jobs (red flag signaling a massive amount of waste and fraud and “ bridge to nowhere type earmarks”, the new job killer vaccine mandates are appearing on the employment scene as LASD just fired 496 employees who refused to get vaccinated and school kids who have not been vaccinated by January 10, will not be allowed to enter classrooms; the oppressive clout of the PC Warriors is found everywhere as a boat in the annual Yorktown Virginia Christmas Boat Parade which had won first place was forced to return the prize because the boat had a sign displaying “Let’s Go Brandon” (Jim Acosta can’t help himself from his idiotic rants as he claims the popular disgust of Biden’s policies typified by the “Let’s Go Brandon” is fueled by right wingers—who must be increasing exponentially as Biden’s polling numbers continue to fall); Kamala Harris who is so far over her head as  presidential material and is merely collecting a paycheck as VP waiting for Biden has met with several black female activists that really hate white women that the Blues need to win presidential elections; ; Stacey Abrams who never really accepted defeat against Kemp, is back again to again race, holding Reds in utter contempt which the political cartoonist captures so well: 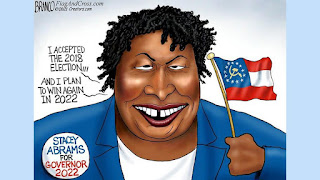 Chicago Gun Violence: Hey Jackass.com is alive and well to collect data to show that through December 7, 2021, gun violence involving mostly persons of color shooting mostly persons of color in Chicago is alive and well with 4317 persons shot of whom 757 have died.
As always, I hope you enjoy today’s holidays and observances, factoids of interest for this day in history,  a recording link to “Mule Train” by Frankie Laine, the fact that you do not a skellum, and a quote from Elon Musk on why small companies are more innovative, secure in the knowledge that if you want to send a gift for any memorable events like Thanksgiving or Veterans  Day, college graduations, birthdays, weddings, or anniversaries, you know that the Alaskanpoet can provide you with a unique customized poem at a great price tailored to the event and the recipient. Please contact me for details on pricing.
1.  National Christmas Tree Day—created by Jace Galloway-Shoemaker maker to celebrate what over the years has become a symbol for Christmas in the Christian world with the evergreen boughs representing the eternal life promised to those who believe in Christ and makes the arson allegedly committed by Craig Tamanaha who climbed on top of the 50 foot tall decorated Christmas Tree outside of Fox’s broadcast center early this morning to destroy it by fire; he has been arrested for arson but not for a hate crime of destroying one of Christianity’s symbols.
2.  Immaculate Conception Day—celebrated by Catholics as the day that the Virgin Mary was conceived to be free of original sin and celebrated  throughout the Christian World.

3.  1949  Number 1 Song USA—the number 1 song in 1949 on this day was  “Mule Train” by Frankie Lane on a run of 6 weeks in that position to join 8 other songs that achieved number 1 status. Here’s a recording of Frankie Laine performing “Mule Train”: https://www.youtube.com/watch?v=oZ62MOvS2hQ   Laine was a noted singer, songwriter and actor whose career spanned almost 75 years still performing in his later years slowed down by triple and quadruple bypass surgeries and a stroke to record his last song “Taps/My Buddy” shortly after 9/11 to honor the NYPD and his last performance on  a PBS special in 2006 performing to a standing ovation “My Desire” to finally sing no more on February 6, 2007 due to heart failure.

4.  Word of the Day—the word of the day is “skellum” which means villain or scoundrel  which in our divisive and polarized environment is used too often to describe anyone who disagrees with you.
5.  Almost—celebrating the birth on this day in 1981 of Phillip Rivers who played 17 years of professional football, 16 with the Chargers and his final one with the Colts and who holds the record for the most touchdown passes for a quarterback without a Super Bowl appearance.
On this day in:
a. 1854 Pope Pius IX proclaimed the dogmatic definition of the Doctrine of Immaculate Conception that the Virgin Mary was conceived free of Original Sin.
b. 1941 after addressing a joint session of Congress where he Pearl Harbor a day which will live in infamy, the Senate voted 82-0 in favor of war and the House voted 388-1 in favor also with the only negative vote being cast by Jeannette Rankin who also voted in 1917 of declaring war against Germany but in that vote was joined by 49 fellow House members.
c. 1987 the Intermediate Range Nuclear Forces Treaty was signed by President Ronald Reagan and Soviet Premier Mikhail  Gorbachev in White House.
d. 2010 with the successful launch of the Falcon 9 and the launch of the Dragon, SpaceX became the first private company to launch, recover and orbit a spacecraft. injection.
e. 2019 the first confirmed case of COVID-19 was confirmed in China which quickly spread to a worldwide pandemic which has resulted in 267,805,808 cases and  5,292,182 deaths as of today, 2 years later, and still the gift of death that keeps on giving.

© December 8, 2021 Michael P. Ridley aka The Alaskanpoet
Alaskanpoet for Hire, Poems to Admire
Poet Extraordinaire, Beyond Compare
A Unique Gift, All Recipients Receive a Lasting Lift