December 2, 2021 Ridley's Believe It Or Not Special Education Day

CV USA Cases: Total cases now over 49 million at 49,878,049 with 9,606,688 active cases of which 13,714  are serious or critical, (8,599 on 3/25/2021) (back to steady decreases with upticks despite the  Delta variable to .143% of active cases and to decrease the reduction from the 29,271 peak on 12/31/2020 to 15,557, 40,271,361 closures with 808,116 deaths (2.01%) and with 39,463,245 recoveries (97.99%). Our death rate percentage is .14% lower than the world’s death rate.
Standing: On a deaths per million population measure on a steady but slow climb to 2421 the U.S. ranks behind Peru (5979) the new number 1 which has had a quantum leap in deaths previously unmatched which was a change in the classification to give Peru the a new method of reporting; Bulgaria the new number 2 (4185), Hungary (3649), Romania (2986), Brazil (2866) which has been hit with a rapid rise in deaths now slowing down passed by Romania, Argentina (2548), and newly added to the list Columbia (2491),  and slightly better than Belgium (2326), Poland (2253), Mexico (2252), Italy (2222),  UK (2126),  Chile (1987),  Spain (1885),  Ecuador newly added to list (1845),  France (1824), Portugal (1821), Bolivia (1614),  Sweden (1486) that never closed its economy down like we did, and Switzerland (1323).
Tests: No need to tally tests as testing programs are functioning well.
CV Open Gate: Lost in the pronouncements by Biden and his lackeys  that there is no crisis of illegals surging across the border is that fact that COVID-19 is alive and well and spreading in the Northern Triangle and Mexico which is  11th  on my list of deaths from the pandemic  at 2252/M with 349,171 active cases and a fatality rate of 8.31% of closed cases and the 3 countries in the Northern Triangle in terms of active cases and deaths per million are as follows even though the data may be suspect as underreported (regardless of number we need no more cases):
Guatemala:  Active Cases:     1244  Deaths/M   869
Honduras:    Active Cases: 245,978  Deaths/M 1028
El Salvador:  Active cases:   13,040  Deaths/M  579
US Vaccinations: As of 12/01/21 460.8 million doses,  1.12 million per day (2 months left for 75% of population to be vaccinated) and in California 136,823  per day  (which means at least 79% of the population of California has received at least one shot which many believe is necessary to develop herd immunity (other than Flip Flop Fauci who may believe that 90% is required).  In California 59,507,598 total doses have been given (84.4%  of doses received to exceed the U.S. average of 80.5%), California has moved from  6th  to 8th of the 50 states in terms of the percentage of doses administered as a percentage of doses delivered to the states and at 63.2% of its population fully vaccinated compared to the U.S. average of 59.4% and has  moved from 14th to 12th tied with Colorado  in terms of the percentage of the population fully vaccinated compared to other states.
Non  CV News:  The first confirmed case of the Omicron Variant of COVID-19 has been confirmed in SFO where a fully vaccinated and booster shot man has been infected and quarantined with mild symptoms; in the highly watched Mississippi abortion case, oral questions by conservative members of SCOTUS although not necessarily predictive on how they might rule seem to point to their upholding the law; President Trump’s former Chief of Staff Mark Meadows in a soon to be released book has claimed that Trump had tested positive for COVID-19 before his debate with Biden, a charge Trump has labeled false; Republicans who were up in arms and threatening to shut down the federal government over Biden’s plan to require all companies with over 100 employees have those employees vaccinated as a condition to continue employment caved and agreed to fund the government until February 18, 2022 (the sound too often heard in the halls of Congress is that of a can being kicked down the hallways); in a it’s never too early to begin suing entities to advance your beliefs,  Sofia and André Oliveira,  Portuguese sister and brother teenagers have sued 33 egregious polluting countries including their own to force them to reduce pollution levels (aping young Swede Greta Thunberg as climate activists); the killer of Jacqueline Avant, 81, philanthropist and the wife of music legend Clarence Avant and mother-in-law to Netflix co-CEO Ted Sarandosti,  Aerial Maynor, has been arrested thanks to neighborhood surveillance cameras and the fact he had shot himself in the foot following a burglary in Hollywood after the killing of Avant; Fauci continues to draw ire for his flip flops, his arrogance and super ego, involvement in painful experiments on canines, at best deceiving Congress over financing gain of function research at the Wuhan Lab, and ignoring natural immunity’s apparent superiority to that obtained by vaccines, leave it to the political cartoonist to cut through to the quick and reveal the real Fauci: 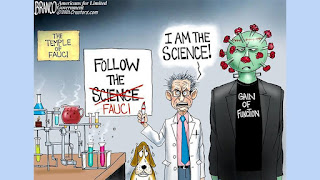 Chicago Gun Violence: Hey Jackass.com is alive and well to collect data to show that through December 1, 2021, gun violence involving mostly persons of color shooting mostly persons of color in Chicago is alive and well with 4261 persons shot of whom 747 have died.
As always, I hope you enjoy today’s holidays and observances, factoids of interest for this day in history,  a recording link to “Paper Doll” by The Mills Brothers, the fact that your cuisine choices have great sipidity, and a quote by Herbert Hoover on his response to The Great Depression, secure in the knowledge that if you want to send a gift for any memorable events like Thanksgiving or Veterans  Day, college graduations, birthdays, weddings, or anniversaries, you know that the Alaskanpoet can provide you with a unique customized poem at a great price tailored to the event and the recipient. Please contact me for details on pricing.
1.  Special Education Day—celebrated on this day since 2005 on the 30th anniversary of the execution by President Ford of the Individuals with Disabilities Education Act which was passed to insure those children with disabilities could still have access to a public school education which they would need more than ever due to their disability.
2.  International Day for the Abolition of Slavery—created by the UN General Assembly and first celebrated on this day in 1986 to promote modern forms of slavery like human trafficking, forced child marriage and child labor and forcing children to join terrorist groups as child soldiers.
3.  1943  Number 1 Song USA—the number 1 song in 1943 on this day was  “Paper Doll” by the Mills Brothers on a run of 8 weeks in that position to join 11 other songs that achieved number 1 status. Here’s a recording of  “Paper Doll” by the Mills Brothers: https://www.youtube.com/watch?v=HaMeSrynug0
4.  Word of the Day—the word of the day is “sipidity” which means having a pleasing taste or flavor which certainly describes most Haagen-Dazs ice cream flavors.
5.  Break a Leg on Tour Not a Great Thing—celebrating the birth on this day in 1960 of noted drummer Nicholas Charles Dingley better known to his fans as “Razzle” who was the drummer for the Finnish rock band Hanoi Rocks whose front man broke his ankle during the band’s second tour in the U.S. which caused the band to postpone several gigs freeing them to party on December 8, 1984 with members of the band  Mötley Crüe  at the house of Vincent Neil, the lead vocalist of the Mötley Crüe but after the alcohol had been exhausted Neil and Razzle headed to a liquor store with Neil driving with a blood alcohol of .17% and running into another car severely injuring the passengers in the car he hit and killing Razzle at the scene of the accident.
On this day in:
a. 1930 in a too little too late movement in his State of the Union Address as The Great Depression was increasing in its economic devastation, President Hoover proposed a $150 million public works project to create jobs and stimulate the economy.
b. 1954 the U.S. Sino Defense Treaty was signed by the U.S. and the Republic of China relating to the defense of Taiwan which China increasingly emboldened by a perception of a weak and frail President Biden  seems to be inching toward an invasion of Taiwan.
c. 1993 Pablo Escobar, infamous Columbian drug cartel leader, after escaping from a luxury prison in 1991 and had escaped detection was finally cornered and shot to death in a shootout with Columbian police and military forces.
d. 2001 Enron filed for Chapter 11 Bankruptcy which at that time was the largest in American history until later surpassed by the World-Com Bankruptcy and destroyed the life savings of many employees who invested their 401 plans in Enron stock as encouraged by company officers.
e. 2020 the United Nations Commission on Narcotic Drugs removed cannabis from the list of dangerous drugs of the Single Convention on Narcotic Drugs.
Reflections on the Great Depression by a president who joked he was the only person to have an economic depression named after him: “Two courses were open to us. We might have done nothing. That would have been utter ruin. Instead, we met the situation with proposals to private business and to the Congress of the most gigantic program of economic defense and counterattack ever evolved in the history of the Republic. We put that program in action. Our measures have repelled these attacks of fear and panic. . . . We have used the credit of the Government to aid and protect our institutions, both public and private. We have provided methods and assurances that none suffer from hunger or cold amongst our people. We have instituted measures to assist our farmers and our homeowners. We have created vast agencies for employment.”― Herbert Hoover, Messages and Papers of Herbert Hoover."                                 Please enjoy the poems on events of interest on my twitter account below (if you like them, retweet, and follow me) and follow my blogs. Always good, incisive and entertaining poems on my blogs—click on the links below. Go to www.alaskanpoet.blogspot.com for Ridley’s Believe It Or Not—This Day in History,  poems to inspire, touch, emote, elate and enjoy and poems on breaking news items of importance or go to  Ridley's Believe It Or Not for just This Day in History.

© December 2, 2021 Michael P. Ridley aka The Alaskanpoet
Alaskanpoet for Hire, Poems to Admire
Poet Extraordinaire, Beyond Compare
A Unique Gift, All Recipients Receive a Lasting Lift