December 4, 2021 Ridley's Believe It Or Not SKYWARN Recognition Day

RIDLEY’S BELIEVE IT OR NOT December 4, 2021
CV World Cases: The CV pandemic across the planet continues on an increasing basis with cases now over 265 million at 265,684,230 cases,  21,070,007 of which are active, 244,614,223  closed with 239,350,504 recoveries (97.85%), and cracking the 5,000,000 barrier 5,263,719 deaths (2.15% ))to continue the low trend of increased cases with increased recovery percentages and decreased death percentages with some plateaus, dips, and rises.
CV USA Cases: Total cases now over 49 million at 49,933,750 with 9,627,031 active cases of which 13,725  are serious or critical, (8,599 on 3/25/2021) (back to steady decreases with upticks despite the  Delta variable to .143% of active cases and to decrease the reduction from the 29,271 peak on 12/31/2020 to 15,546, 40,306,719 closures with 808,608 deaths (2.01%) and with 39,498,111 recoveries (97.99%). Our death rate percentage is .14% lower than the world’s death rate.
Standing: On a deaths per million population measure on a steady but slow climb to 2423 the U.S. ranks behind Peru (5987) the new number 1 which has had a quantum leap in deaths previously unmatched which was a change in the classification to give Peru the a new method of reporting; Bulgaria the new number 2 (4190), Hungary (3649), Romania (2992), Brazil (2867) which has been hit with a rapid rise in deaths now slowing down passed by Romania, Argentina (2548), and newly added to the list Columbia (2492),  and slightly better than Belgium (2330), Poland (2266), Mexico (2254), Italy (2223),  UK (2128),  Chile (1988),  Spain (1885),  Ecuador newly added to list (1845),  France (1825), Portugal (1823), Bolivia (1614),  Sweden (1486) that never closed its economy down like we did, and Switzerland (1328).
Tests: No need to tally tests as testing programs are functioning well.
CV Open Gate: Lost in the pronouncements by Biden and his lackeys  that there is no crisis of illegals surging across the border is that fact that COVID-19 is alive and well and spreading in the Northern Triangle and Mexico which is  11th  on my list of deaths from the pandemic  at 2254/M with 349,483 active cases and a fatality rate of 8.31% of closed cases and the 3 countries in the Northern Triangle in terms of active cases and deaths per million are as follows even though the data may be suspect as underreported (regardless of number we need no more cases):
Guatemala:  Active Cases:     1219  Deaths/M   869
Honduras:    Active Cases: 245,799  Deaths/M 1028
El Salvador:  Active cases:   13,040  Deaths/M  579
US Vaccinations: As of 12/04/21 462.3 million doses,  .949 million per day (2 months left for 75% of population to be vaccinated) and in California 116,171  per day  (which means at least 79% of the population of California has received at least one shot which many believe is necessary to develop herd immunity (other than Flip Flop Fauci who may believe that 90% is required).  In California 59,768,100 total doses have been given (84.2%  of doses received to exceed the U.S. average of 80.4%), California has not moved from  8th of the 50 states in terms of the percentage of doses administered as a percentage of doses delivered to the states and at 63.3% of its population fully vaccinated compared to the U.S. average of 59.4% and has  moved from 12th tied with Colorado to 14th   in terms of the percentage of the population fully vaccinated compared to other states.
Non  CV News:  First Andrew Cuomo had to resign in disgrace over mounting sexual harassment claims and finally CNN after being pressured to suspend Chris Cuomo for his journalistic missteps concerning his assistance to his brother which crossed the line by trying to dig up dirt on his brother’s accuser came to its senses and fired him effective immediately (totally appropriate response still a long way for CNN to go regain any sense of journalistic integrity given their hiring back after suspension of Tobin for masturbating on air during a Zoom conference); Stelter who is blind to any missteps of liberals and who had previously claimed Chris Cuomo had upheld the standards of journalism finally admitted that Cuomo had created a toxic environment at CNN; in a family that gets charged together in jail stays together moment the Crumbleys are in the same jail together; Oregon is moving toward a permanent indoor mask requirement; shocking evidence that Omicron trumps vaccines as over 50% of Norwegians attending a 120 person Christmas party for a company which limited attendees to fully vaccinated who had a rapid negative CV test within 24 hours of attending tested positive for COVID-19 with 13 testing positive for the Omicron Variant with those positive having either no or mild symptoms; Michigan players wore Jerseys that had logos of “42 TM” with 4 hearts to honor the Tate Myre and the other 3 student victims at the Oxford High School shootings to beat Iowa 42-3 in the Big Ten Championship Game top most likely earn a number 1 or 2 seed in the Championship Final 4; while Iran seems to be going pedal to the metal to enrich weapons grade uranium, a explosion was heard at the Natanz Uranium Enrichment facility with conflicting reports out of Iran as to explanations of cause; while out of touch Newsom and California’s AG Bonta are inanely stating the state has sufficient tools to confront the escalating smash and grab thefts that are plaguing this nation and California, D.A.’s and retail associations are singing a far different tune (doubt in Gascon or Boudin are joining the chorus unless the recall fears are getting to these pro-felons D.A.’s; top experts at the Reagan Defense Forum were sounding off that the manner of our Afghan withdrawal has severely damaged our credibility as reliable allies on the world stage (an opinion shared by most Americans except the tone deaf members of the Biden Administration and the leftist “pundits” that monopolize the airways of MSM); Adam Schiff is despicable liar that does not belong in the House but leave it to the political cartoonist to attack his lies with a Christmas line of humor: 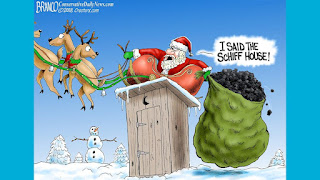 Chicago Gun Violence: Hey Jackass.com is alive and well to collect data to show that through December 3, 2021, gun violence involving mostly persons of color shooting mostly persons of color in Chicago is alive and well with 4283 persons shot of whom 752 have died.
As always, I hope you enjoy today’s holidays and observances, factoids of interest for this day in history,  a recording link to “It’s Been a Long, Long Time” by Harry James and His Orchestra with Kitty Kallen, the fact that your actions do not merit aa siserary from your contemporaries; and a quote by Utah Phillips on free speech, secure in the knowledge that if you want to send a gift for any memorable events like Thanksgiving or Veterans  Day, college graduations, birthdays, weddings, or anniversaries, you know that the Alaskanpoet can provide you with a unique customized poem at a great price tailored to the event and the recipient. Please contact me for details on pricing.
1.  SKYWARN Recognition Day—created by the National Weather Service and by the American Radio Relay League in 1999 and first observed on November 27, 1999 and thereafter on the first Saturday in December to honor the amateur radio broadcasters who alert the National Weather Service as to pending adverse weather events that could be dangerous to life and property where like in tornadoes advance warning can be brief in terms of lead time and so valuable to give people to be affected time to seek shelter.
2.  Chester Greenwood Day—celebrated on the first Saturday in December to honor the Farmington, Maine inventor who at age 15 created an earmuff to enable him to keep his ears warm while skating and patented it at age 15 and founded a company that before his death was selling 400,000 ear muffs a year. In 1977 Maine declared December 21 to be Chester Greenwood Day but the City of Farmington still adheres to the first Saturday of December to celebrate the day.
3.  1945  Number 1 Song USA—the number 1 song in 1945 on this day was  “It’s Been a Long, Long Time” by Harry James and His Orchestra with Kitty Kallen on a run of 3 weeks non continuous in that position to join 8 other songs that achieved number 1 status. Here’s a recording of Harry James and His Orchestra with Kitty Kallen performing “It’s Been a Long, Long Time”: https://www.youtube.com/watch?v=iP0tHmoc1rs
4.  Word of the Day—the word of the day is “siserary” which means scolding which describes what the Blue progressives could use although most likely it would not change their destructive policies.
5.  Fox Troika  Rules MSNBC and CNN Drool—celebrating the birth on this day in 1961 of Sean Hannity a Fox News Host who along with Tucker Carlson and Laura Ingram rule Prime Time Cable News leaving the MSM competitors in the ratings dust.
On this day in:
a. 1945 having concluded that the failure of the U.S. to join the League of Nations contributed to World War II, the U.S. Senate voted 65-7 to join the United Nations which had been formed on October 24, 1945.
b. 1964 800 students at University of California at Berkeley were arrested after seizing the Administration Building in protests to the Board of Regents banning protests on University Property.
c. 1978 following the assassination of San Francisco Mayor Moscone, Diane Feinstein became the first female mayor of the city which she used to launch herself into the U.S. Senate where she has been since 1992 and is now the oldest person in the Senate at over 88 years having been born on June 22, 1933 with concerns over her cognitive decline.
d. 1991 Pan American Airways ceased operations after flying for 64 years.
e. 2017 the Thomas Fire started by So California Edison power lines near Santa Paula quickly grew to destroy 440 square miles, destroy 1063 buildings, take 2 lives and cause $2.2 billion in damages until contained on January 12, 2018 to become the largest wildfire in California history until quickly surpassed by other wildfires to now stand as the 7th largest wildfire in California history.
Reflections on the Free Speech Movement: “The state can't give you free speech, and the state can't take it away. You're born with it, like your eyes, like your ears. Freedom is something you assume, then you wait for someone to try to take it away. The degree to which you resist is the degree to which you are free...” Utah Phillips, an American labor organizer, folk singer, poet and self-described anarchist whose quote should be a wakeup call to conservatives under attack for speaking at universities and banned from social media.
Please enjoy the poems on events of interest on my twitter account below (if you like them, retweet, and follow me) and follow my blogs. Always good, incisive and entertaining poems on my blogs—click on the links below. Go to www.alaskanpoet.blogspot.com for Ridley’s Believe It Or Not—This Day in History,  poems to inspire, touch, emote, elate and enjoy and poems on breaking news items of importance or go to  Ridley's Believe It Or Not for just This Day in History.

© December 4, 2021 Michael P. Ridley aka The Alaskanpoet
Alaskanpoet for Hire, Poems to Admire
Poet Extraordinaire, Beyond Compare
A Unique Gift, All Recipients Receive a Lasting Lift

Posted by Michael P. Ridley aka the Alaskanpoet at 12:11 PM