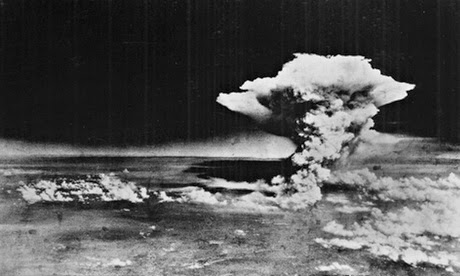 I have always loved mushrooms especially in olive oil and garlic sauteed
So tasty yet so little calories for the weight gain to delay
How could 8 ounces of fungi from the stores taste so good?
My mother was more adventurist and shopped for them in the fields and woods
Shaggy Morels were to her mycology friends the crown jewels
But too many other mushrooms poisonous landmines to be eaten only by fools
On this August 6th day the anniversary of the second mushroom in the sky
The one marking the fact that over 90,000 men, women, and children would die
I can still see my mycologist mother with a basket of picked mushrooms
Carefully pointing out what was safe to eat and what would bring you doom
To this far sighted kid peering through his glasses other than toadstools they all looked the same
Far better to head for Safeway where picking the right mushroom was not a deadly game
Today the Safeway mushrooms are U.S., Britain, China, Putin, notwithstanding, Russia and France
No leader in that country would ever want to go to the Mutually Assured Destruction Dance
India but for Pakistan would like to join that club; but jihad in Pakistan may be alive and well
For a jihadist there is only Paradise and virgins and never the MAD hell
North Korea and Iran in the nuclear mycology world are toadstools-- there can be no debate
We cannot allow them to nuclear weapons create
In that regard without a military option, we are not doing very well
When does the day come when another city by these rogues is sent to a nuclear hell?
We still have the issue of accident, theft and human or computer error
That will always be with us if we are armed with nuclear terror
One might propose discussion on whether if we can’t put the genie back in the bottle
We put her on a massive diet and Patriots and SDIs for all and her urge to come out so throttle
Like my mother who to avoid anyone in the family going to the deadly mushroom brink
After washing off the Shaggies would throw the deadly others down the sink.
© August 6, 2014 Michael P. Ridley aka the Alaskanpoet
Posted by Michael P. Ridley aka the Alaskanpoet at 1:21 PM