Musk Ridicules Blues in a Tweet while They Ignore FTX Fraud in Billions Because Founder is $38 Billion Donor?

The fact that he is a supporter of free speech makes them very bitter
7 Blue Senators unlike the movie are not the Magnificent Seven on whom mere mortals could rely Blumenthal, Lujan, Warren, Markey, Menendez,  Booker and DiFi
Are demanding that Musk’s takeover is putting consumers at risk
Because Musk will champion free speech as censorship of conservative Red ideas will cease to exist

They have signed and sent a letter to the FTC demanding an investigation
Oblivious to the fact that the number 2 Blue donor appears to be guilty of the theft of billions to merit our condemnation
Blues are quick to point out Sam Bankman-Fried also donated to Reds
1% of the $38 billion total and the other 99+% to elect Blues instead
Twitter employees who have not been fired and choose to remain
Will find a new sheriff in Twitter Town to cause free speech and objectivity to reign
Musk may be in for a rough slog
Bringing some objectivity to this leftist bog
Look for the left to begin a concerted campaign
To have advertisers on Twitter spending to refrain
When it push comes to shove this poet on Musk would place his bets
Watching him succeed while making the biased left really very upset
© November 18, 2022 The Alaskanpoet
We also should cheer
His to the point tweets to appear
Ridicule the left for chasing windmills
While a huge Blue donor was fleecing his investors from a lot of bills 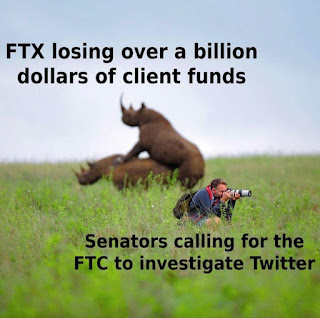 Posted by Michael P. Ridley aka the Alaskanpoet at 8:29 PM