US Vaccinations: As of 4/27/2021 237.4 million doses have been given, 2.63 million per day in the last week (sounds impressive but if the rate does not increase it will take us now reduced to some 3 months to have 75% of the population vaccinated which many believe is necessary to develop herd immunity. In California 29,957,450 total doses have been given (77.7% of doses received to equal the U.S. average of 77.7%), but even with the pressure of a recall to be scheduled this fall which hopefully end Newsom’s term, California has risen slightly from 28th tied with South Dakota to 27th out of the 50 states in terms of the percentage of doses administered as a percentage of doses delivered to the states and at 29.9% of its population fully vaccinated compared to the U.S. average of 30% has risen slightly from 32nd to 29th tied with Illinois.  A long way to go to get herd immunity and lagging in terms of getting vaccines received into arms and percentage of population vaccinated compared to other states means a great reason to recall this inept and hypocritical governor.
Non CV News: The sycophants of the MSM were falling over themselves in praise of Biden’s SOTUS almost comparing him top the second coming of Christ as after opening with a bunch of platitudes of unity and coming together laid out his spending and taxing government expansion in want to ram through the Congress while falsely claiming that most of it will be paid for by the rich and the corporations who either have paid no tax or little tax and raising the rate of capital gains of the wealthy (a nonpartisan Wharton study claims capital gains revenue would fall by some $900 billion and though not stated lawyers’ and CPAs’ income would rise significantly); Senator Scott delivered a damaging response to Biden’s grandiose plans which caused the left to go berserk and level true racist charges against the Senator they tweet was “Uncle Tim” (can one imagine the level of scorn and abuse that would be launched if because of his government expansion plans Biden was labeled “Uncle Joe” as in Joseph Stalin; a fully vaccinated Biden at an outdoor rally in Georgia was hit with a senior moment frantically looking for his mask which after 30 seconds he found in his pocket; after leveling all manner of charges of systematic racism, Biden has just come to admit that most Americans are not racists but African Americans are so far the eight ball in terms of education, health and opportunity they need help (look to the DNC’s auxiliary the urban teachers unions to see why education for blacks is failing in public schools but not usually charter schools free of their crushing grip).
Montana has gained a second seat in Congress and Ryan Zinke, former Red House member, Interior Department Secretary and Navy Seal will be running to win it; Brazil which has been having a surge of CV cases and just moved past the UK in terms of deaths per million has just banned Russia’s Sputnik V COVID-19 because it carried a live cold virus; one hopes that this statement from Biden solidifies the perception that mentally he has lost it as he has proclaimed Stacey Abrams could be president if she wants it (God help us if she gets anywhere near the Oval Office; Mexico which stands at 12th in the Alaskanpoet’s Ridley's Believe It Or Not index of COVID-19 deaths per million at 1660/M will now be the recipient of Pfizer’s exporting of its vaccine; the Conservative censor is seeing fewer users and Twitter’s stock price is sinking (after the “Uncle Tim” #, Reds and conservative Indies should say to Twitter enough and bail until their practice of censoring and shadow banning conservative speech is ended; while the Clintons and the Bidens are the beneficiaries of FBI no investigations, Rudy Giuliani has his house raided and the FBI puts not a finger on the Hunter Biden smoking gun laptop, leave it to the political cartoonist to expose the two systems of justice from an FBI we used to hold in great esteem until politicized by the Obama Administration: 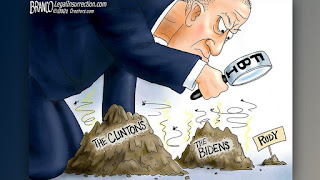 Chicago Gun Violence: HeyJackass.com is back to show that through April 28, 2021, gun violence involving mostly persons of color shooting mostly persons of color in Chicago is alive and well with 1027 persons shot of whom 186 have died.
As always, I hope you enjoy today’s holidays and observances, factoids of interest for this day in history, a musical link to “Night Fever” by the Bee Gees, that you rarely guilty of being refractory and a quote by Mohammad Ali on the results of his refusing to be drafted,  secure in the knowledge that if you want to send a gift for any memorable events like Mother’s Day, college graduations, birthdays, weddings, or anniversaries, you know that the Alaskanpoet can provide you with a unique customized poem at a great price tailored to the event and the recipient. Please contact me for details on the pricing.
1. International Dance Day—created by the International Theater Institute in 1982 to celebrate and promote dance and its contribution to our culture and wellbeing.
2.  Viral Video Day—created by freelance writer Jace Shoemaker-Galloway in 2013 and celebrated on this day to commemorate all those armed with cell phones or video cameras that have captured or created scenes some of which like the 9 ½ minutes of Officer Chauvin killing George Floyd have been really memorable and then shared them virally, making “smile you are on camera” a reality in today’s smart phone world.
3.  1978 Number 1 Song USA—the number 1 song in 1978 was “Night Fever” by the Bee Gees on a run of 8 weeks in that position to join 18 other songs reaching number 1, 7 of which were written or co-written by Barry Gibbs. Here is a recording by the Bee Gees of “Night Fever”: https://www.youtube.com/watch?v=-ihs-vT9T3Q
4.  Word of the Day—the word of the day is “refractory” which means unruly or unmanageable which describes to a tee what far too many of the BLM protests morph into.
5.  Recovering from the IRS and Dodging Cancer--—celebrating the birth on this day in 1933 of noted and iconic country western singer and songwriter Willie Nelson who despite earlier 2 ½ packs a day smoking habit and proclivity and major problems with the IRS has avoided lung cancer and is still going strong with that raspy singing voice of his at the ripe young age of 88.
On this day in
a. 1967 after refusing to be drafted into the U.S. Army. Mohammed Ali was stripped of his boxing heavy champion title and banned from boxing.
b. 1986 a fire at the Los Angeles Central Library destroyed or damaged some 400,000 books and other items.
c. 1997 the Chemical Weapons Convention of 1993 outlawing the manufacture, stockpiling and use of chemical weapons went into effect.
d. 2011 Prince William and Kate Middleton were married in Westminster Cathedral.
e.  2015 a MLB game between the Baltimore Orioles and the Chicago White Sox set the all time low for fans in attendance at 0 due to the Baltimore 2015 Riots caused by the death of Freddie Gray arrested for a carrying a switchblade which turned out to be false and who was injured while being transported not seat belted in in a police van to the station and went into a coma and died.
Reflections on the consequences of refusing to be drafted: “I am not allowed to work in America and I’m not allowed to leave America. I’m just about broke.” Mohammed Ali in February 1968 nearing his first year of being banned from boxing.                 Please enjoy the poems on events of interest on my twitter   account below (if you like them, retweet, and follow me) and follow my blogs. Always good, incisive and entertaining poems on my blogs—click on the links below. Go to www.alaskanpoet.blogspot.com for Ridley’s Believe It Or Not—This Day in History,  poems to inspire, touch, emote, elate and enjoy and poems on breaking news items of importance or go to  Ridley's Believe It Or Not for just This Day in History.

© April 29, 2021 Michael P. Ridley aka The Alaskanpoet
Alaskanpoet for Hire, Poems to Admire
Poet Extraordinaire, Beyond Compare
A Unique Gift, All Recipients a Lasting Gift

Posted by Michael P. Ridley aka the Alaskanpoet at 11:11 AM