US Vaccinations: As of 4/25/2021 228.7 million doses have been given, 2.75 million per day in the last week (sounds impressive but if the rate does not increase it will take us now reduced to some 3 months to have 75% of the population vaccinated which many believe is necessary to develop herd immunity. In California 28,798,648 total doses have been given (79.8% of doses received to exceed the U.S. average of 78.7%), but even with the pressure of a certain recall coming endangering Newsom, California has fallen from 23rd to tied with Illinois at 24th  out of the 50 states in terms of the percentage of doses administered as a percentage of doses delivered to the states and at 28.4% of its population fully vaccinated compared to the U.S. average of 28.5% is stuck at 32nd .  A long way to go to get herd immunity and lagging in terms of getting vaccines received into arms and percentage of population vaccinated compared to other states and a great reason to recall this inept and hypocritical governor.
Non CV News: Where’s Waldo claiming the border crisis is complex and will take time to resolve to justify her refusal to go to the border citing CV issues (she is vaccinated and like Biden is usually no matter how alone she might be wearing a mask—looks like she doesn’t want to tarred with the open border failure); MSM may lie continually on the border issue but by a vote of 46-15% Americans feel the situation at the border has gotten worse under Biden; Chauvin’s medical expert previously the State Medical Examiner in Maryland is now going to have his reports reviewed after a letter signed by over 400 doctors questioned his testimony on the cause of Floyd’s death; Fauci whose idiocy decimated restaurants who expended substantial funds to create outdoor dining with social distancing to survive and were forced to closed due to CDC guidelines has now seen the light and stated that CV infection in outdoor settings is miniscule (finally rectifying an error that sent many businesses into bankruptcy and closure); hypocrisy rules and parents and school children drool as the Chandler School District cancelled the school prom due to CV concerns yet saw fit to hold a large retirement party for its school superintendent.
The Oscars are going on in L.A.’s Union Central Station with attendees limited to 170 and mask less with no host and wondering how low the drop in ratings will continue to drop (after listening to the elite with their gated communities and armed guards with no need for police and way too much anti-police over the top rhetoric, the safe bet is viewers will flee the Awards Ceremony and hopefully start boycotting the movies stop filling the pockets of the leftist biased elite); for those thinking to walk on Mars the first time thanks to SpaceX, Elon Musk has given a chilling prediction—people will die and the quarters will be cramped and the food not good on the pioneer trip to Mars; in a who needs Brady moment Rob Gronkowski who played football at Arizona, caught after 2 tries, a football dropped from 600 feet before the Wildcats annual spring scrimmage game; James O’Keefe founder of Veritas, after being banned by Jack Dorsey’s Twitter, is in the process of suing CNN and Twitter—nothing like a multimillion  dollar judgment to shed Twitter’s biased algorithms  and force CNN to cease its fake news; forget about we will pay your sales tax promos, a Wyoming roofing company has the best inducement to buy a new roof—a new Ar-15. In 1993 the Reptilian Brain-in-Chief invited Epstein and Maxwell to the White House after Epstein had donated funds to renovate the Oval Office.
Backers of a recall effort for L.A. DA Gascon have formally started the process and have started the 160 day clock to obtain 580,000 signatures of registered voters to place a recall on the ballot https://recallgeorgegascon.com/; as the dust settles across this land following riots and the mustering of the National Guard to try to prevent them  leave it to the political cartoonist to exposed the true feelings Blues have for the forces of law and order: 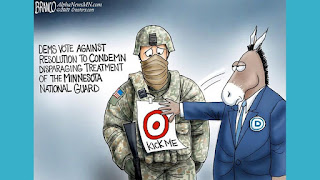 Chicago Gun Violence: HeyJackass.com is back to show that through April 24, 2021, gun violence involving mostly persons of color shooting mostly persons of color in Chicago is alive and well with 986 persons shot of whom 178 have died.
As always, I hope you enjoy today’s holidays and observances, factoids of interest for this day in history, a musical link to “TSOP (the Sound of Philadelphia) by MFSB and The Three Degrees, the need to redintegrate the American Dream and a quote by Thomas Edison on solar energy,  secure in the knowledge that if you want to send a gift for any memorable events like Mother’s Day, college graduations, birthdays, weddings, or anniversaries, you know that the Alaskanpoet can provide you with a unique customized poem at a great price tailored to the event and the recipient. Please contact me for details on the pricing.
1. Parent Alienation Awareness Day—founded by Canadian activist Sarvy Emo and first observed on this day in 2006 to bring awareness to the tragic collateral damage arising out of divorces with children involved where the custodial parent 24/7 tries to alienate the noncustodial parent from the children with damaging effects to the children.
2.  World Malaria Day—created by the World Health Organization in 2007 to promote awareness of the disease and education on how to treat and curtail its spread.
3.  1974 Number 1 Song USA—the number 1 song in 1974 was “TSOP (the Sound of Philadelphia)” MFSB and The Three Degrees on a run of 2 weeks in that position to join 34 other songs reaching number 1 in a year in which 25 groups had their first number 1 song.  Here is a recording by MFSB and The Three Degrees of “TSOP (The Sound of Philadelphia)”: https://www.youtube.com/watch?v=4Z0QE44smfo   MSSB standing for “Mother, Father, Sister and Brother” was a group of 30 studio musicians based at Philadelphia’s Sigma Sound Studios and the song TSOP was instrumental in creating the disco fever and success.
4.  Word of the Day—the word of the day is “redintegrate” which means “resuscitate or restore” our prosperity before it is damaged by Biden policies beyond repair.
5.  Still Ticking—celebrating the birth on this day in 1940 of noted actor and director Al Pacino who has been on the big screen since 1969 and is still going strong today.                          On this day in
a.  1901 true to government’s belief that if it moves, “tax it,” New York became the first state to require license plates on cars.
b.  1954 the first practical solar cell was demonstrated by Bell Laboratories.
c.  1959 The Saint Lawrence Seaway linking the Great Lakes to the Atlantic Ocean was officially opened to shipping.
d. 1961 Robert Noyce was granted a patent for the integrated circuit.
e. 1988 John Demjanjuk after being deport from the United States to Israel was sentenced to death for his role as a concentration camp guard which was ultimately overturned permitting him to return to the United States in 1993 where he was deported once again to Germany in 2009 to face trial for killing prisoners at another concentration camp, tried and convicted and sentenced to 5 years on May 12,2011 but was staying in a nursing home pending his appeal and died before a verdict was handed down on March 17, 2012 at the age of 91.

Reflections on solar cells: “We are like tenant farmers chopping down the fence around our house for fuel when we should be using Natures inexhaustible sources of energy – sun, wind and tide. … I’d put my money on the sun and solar energy. What a source of power! I hope we don’t have to wait until oil and coal run out before we tackle that.” Thomas Edison
Please enjoy the poems on events of interest on my twitter   account below (if you like them, retweet, and follow me) and follow my blogs. Always good, incisive and entertaining poems on my blogs—click on the links below. Go to www.alaskanpoet.blogspot.com for Ridley’s Believe It Or Not—This Day in History,  poems to inspire, touch, emote, elate and enjoy and poems on breaking news items of importance or go to  Ridley's Believe It Or Not for just This Day in History.

© April 25, 2021 Michael P. Ridley aka The Alaskanpoet
Alaskanpoet for Hire, Poems to Admire
Poet Extraordinaire, Beyond Compare
A Unique Gift, All Recipients to Receive a Lasting Gift

Posted by Michael P. Ridley aka the Alaskanpoet at 10:15 PM