US Vaccinations: As of 4/27/2021 232.4 million doses have been given, 2.72 million per day in the last week (sounds impressive but if the rate does not increase it will take us now reduced to some 3 months to have 75% of the population vaccinated which many believe is necessary to develop herd immunity. In California 29,372,925 total doses have been given (78.1% of doses received to equal the U.S. average of 78.1%), but even with the pressure of a recall to be scheduled this fall which hopefully end Newsom’s term, California has dropped from 24th to 28th tied with South Dakota out of the 50 states in terms of the percentage of doses administered as a percentage of doses delivered to the states and at 29.0% of its population fully vaccinated compared to the U.S. average of 29.1% has fallen from 31st to 32nd.  A long way to go to get herd immunity and lagging in terms of getting vaccines received into arms and percentage of population vaccinated compared to other states means a great reason to recall this inept and hypocritical governor.
Non CV News: Rudy Giuliani’s home was raided by the FBI evidently looking for evidence that he violated the law by acting as a lobbyist for Ukraine without registering (lawyers are not supposed to be above the law, but search raises questions on whether this is politically motivated by Rudy’s legal work for Trump); Biden addresses the nation in his SOTHUS which should unveil massive spending and taxing plans in a transformational attempt to move America to a more socialist nation with a less secure border and more illegals becoming citizens in the Blues’ belief they will vote Blue and the blacks who are most likely to be decimated by more low skilled low paid illegals are too seduced by Blues to know what will happen to their prosperity; Chicago police released videos of the police shooting of Anthony Alavarez who was running away but refused to drop his gun until shot (Mayor Lightfoot and the Alavarez Family to their credit are calling for peace in a city in which color on color shootings are rising off the charts dwarfing any shootings by police); Lori Laughlin and Mossimo Giannulli have joined the exodus of high income tax payers to leave the state for Idaho;  even as the economy is heating up and may do so even more with the massive spending and inflationary pressures it will bring, the Fed will be targeting fed funds at between ) and .25%;  Patrisse Cullors, the now expensive home mogul of the BLM has been caught with former tweets praising cop killer Assata Shakur who escaped from prison and is a most wanted FBI fugitive enjoying her freedom in Cuba.
Oregon, run by Blue Governor Brown, ranks neck and neck with California in terms of its weak vaccination program and will now have to endure the Brown Two-Step of closing again restaurants for indoor dining even for those fully vaccinated (29.1% of the population) as she considers making mask wearing permanent and appears to be immune to the plight of those restaurants that will join the ranks of the 1200 already closed; the reptilian brain is alive and well in the Blues’ NYC Mayoral Primary as Scott Stringer, who is running third in polls and is the current NYC Comptroller is facing sexual harassment and groping charges brought by Jean Kim who had worked for him as an unpaid intern as is now a lobbyist (shades of the likes of Andrew Weiner); James McBride, a member of the Board of Directors of the  LAPD Union, is calling for an investigation of LeBron’s tweet now deleted calling for violence against the doxed Columbus police officer who shot and killed Ma’Khia to prevent her from killing another unarmed female black teenager (the first thing the union should do is to encourage members of the LAPD to stop providing security while off duty for this biased overpaid hypocrite); while Biden is going to be touting his tax the wealthy plan, recall candidate Kevin Faulconer, former Mayor of San Diego, is touting the need to lower the high tax rates in California; Justin Zhau, the cofounder of a $2 billion startup Iterable was fired by its board of directors for his using LSD at work to “improve his focus”.
Backers of a recall effort for L.A. DA Gascon have formally started the process and have started the 160 day clock to obtain 580,000 signatures of registered voters to place a recall on the ballot https://recallgeorgegascon.com/; as LeBron James is being castigated for his tweet doxing and threatening the Columbus police officer who shot and killed Ma’Khia, leave it to the political cartoonist to expose the inanity of his remarks: 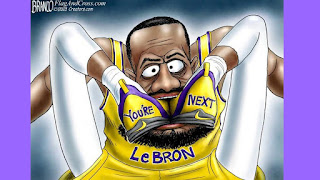 Chicago Gun Violence: HeyJackass.com is back to show that through April 27, 2021, gun violence involving mostly persons of color shooting mostly persons of color in Chicago is alive and well with 1022 persons shot of whom 185 have died.
As always, I hope you enjoy today’s holidays and observances, factoids of interest for this day in history, a musical link to “Don’t Leave Me This Way” by Thelma Houston, that the economy is in a surging reflation that hopefully Biden’s policies do not destroy and a quote by Carlos Fuentes on the torture at Abu Ghraib,  secure in the knowledge that if you want to send a gift for any memorable events like Mother’s Day, college graduations, birthdays, weddings, or anniversaries, you know that the Alaskanpoet can provide you with a unique customized poem at a great price tailored to the event and the recipient. Please contact me for details on the pricing.
1. Read Good Poetry Day—clueless as to whom created this observance but since we are nearing the end of Poetry Month and many people like to save the best for last, perhaps appropriate today it is so celebrated—www.alaskanpoet.blogspot.com has a multitude of great poems in addition to Ridley's Believe It Or Not.
2.  Workers’ Memorial Day—created in 1989 by the AFL-CIO to honor those workers who have been injured or lost their lives while working with this day chosen as it is the anniversary of both the passage of the Occupational Health and Safety Act 0f 1970 and the creation of the Occupational Health and Safety Administration in 1971.
3.  1977 Number 1 Song USA—the number 1 song in 1977 was “Don’t Leave Me This Way” by Thelma Houston on a run of 1 week in that position to join 25 other songs reaching number 1 and 17 other acts which achieved their first number 1 song. Here is a recording by Thelma Houston of “Don’t Leave Me This Way”: https://www.youtube.com/watch?v=yioNn7XS-bw Houston is not related to Whitney Houston and although still performing live today at 74, she was a number 1 hit wonder never again repeated.
4.  Word of the Day—the word of the day is “reflation” which means an increase in economic activity and spending which describes what is happening to our economy as it is opening up after being in essence shutdown for months due to the CV pandemic and should continue if not killed by Biden’s tax hikes.
5.  Rolling Stone Doesn’t Roll for 14 Years—celebrating the birth on this day in 1964 of L’Wren Scott, noted model and stylist and best known as the partner of Mick Jagger from 2000 to March 17, 2014 when beset by depression that Jaggar was starting a relationship with ballerina Melanie Hambrick whom he had met in February, 2009 while on tour in Japan, Scott committed suicide, leaving her entire estate that he did not need to him. Like a true Rolling Stone Jaggar expressed grief but cemented his relationship with Hambrick who is the mother of his latest child and is 43 years younger than he is.
On this day in
a. 1944 9 German E-boats attacked American forces at Slapton Sands in England while they were performing a trial run of D-Day called Operation Tiger and when it was over, 749 GIs had died and 200 had been wounded with 2 LST’s sunk and 2 damaged.
b. 1952 the Treaty of San Francisco came into effect ending World War II between Japan and most of the belligerents arrayed against it.
c. 1970 President Nixon authorized the use of American combat troops in Cambodia to fight the NVA coming through Cambodia into South Vietnam.
d. 1986 high levels of radiation are discovered at a nuclear power plant in Sweden forcing the Soviet Union to admit to the Chernobyl Nuclear Disaster.
e.  2004 CBS News released photographic evidence of abuse, rape and torture of Iraqi detainees  held at Abu Ghraib by American troops.
Reflections on the prisoner excesses by American troops at Abu Ghraib: "What's happened at the Abu Ghraib prison in Iraq is one of the grossest violations of human rights under the Geneva Conventions that we have record of. It is simply monstrous.” Carlos Fuentes, noted Mexican author and essayist.
Please enjoy the poems on events of interest on my twitter   account below (if you like them, retweet, and follow me) and follow my blogs. Always good, incisive and entertaining poems on my blogs—click on the links below. Go to www.alaskanpoet.blogspot.com for Ridley’s Believe It Or Not—This Day in History,  poems to inspire, touch, emote, elate and enjoy and poems on breaking news items of importance or go to  Ridley's Believe It Or Not for just This Day in History.

© April 28, 2021 Michael P. Ridley aka The Alaskanpoet
Alaskanpoet for Hire, Poems to Admire
Poet Extraordinaire, Beyond Compare
A Unique Gift, All Recipients to Receive a Lasting Gift

Posted by Michael P. Ridley aka the Alaskanpoet at 8:27 PM