US Vaccinations: As of 4/11/2021 187 million doses have been given, 3.14 million per day in the last week (sounds impressive but if the rate does not increase it will take us now reduced to some 3 months to have 75% of the population vaccinated which many believe is necessary to develop herd immunity. In California 22,754,163 total doses have been given (78.4% of doses received to  equal the U.S. average of 78.7%), but with the pressure of a certain recall coming endangering Newsom, California has risen up from 26th to 28th tied with Indiana out of the 50 states in terms of the percentage of doses administered as a percentage of doses delivered to the states and at 19.8% of its population fully vaccinated has moved down from 34th tied with Florida and Louisiana to 36th tied with Florida in terms of percentage of population fully vaccinated. A long way to go to get herd immunity and lagging in terms of getting vaccines received into arms and percentage of population vaccinated compared to other states and a great reason to recall this inept and hypocritical governor.
Non CV Case News: Lieutenant Nazario in his Army uniform who is African and Hispanic was stopped near Windsor, Virginia after with his blinkers on looking for a safe place to stop in the dark at an open BP station and was approached with by 2 police officers guns drawn, pulled from the car, pepper sprayed and cuffed and as his complaint alleges threatened with bodily harm before being released (we need this sort of police behavior fueling the BLM narrative like a hole in the head); in another example of how fraught with danger police stops are, police in Minneapolis already on pins and needles due to the Chauvin trial and the likely result of a not guilty verdict made a traffic stop of 20 year old Daunte Wright who they tried to detain after learning he had an outstanding warrant but failed as he was able to reenter his car and try to drive away only to be shot and crash into a parked car several blocks away and die prompting an angry crowd to gather and damage 2 police cars (hopefully the body cams and car cam were on and the warrant was for a serious violent felony to defuse another potential riot).
Edward Shimenti of Zion, convicted of providing support to ISIS despite his assertion at his sentencing hearing that he was a “big teddy bear” was sentenced to 13.5 years in a federal prison; Hideki Matsuyama became the first Japanese to win the Masters by 2 strokes over Will Zalatoris;  San Marcos High School teacher Alissa Piro caught on camera during a Zoom lesson loudly berating students complaining about not being able to have in person learning (another example of teachers’ union inspired hostage taking of students education) https://www.foxnews.com/us/california-zoom-covid; Oak Grove School District consisting only of K-8 schools in San Jose County is voting on a hybrid school reopening plan in which K-6 and 8th are in hybrid half in and half virtual with the 7th graders all confined to virtual in their homes (so much for the billions the schools are getting from Newsom to open with in person learning); 19 days have come and gone and “Where’s Waldo” Harris remains MIA in revealing her her plans on the immigration crisis at the border.
Convicted rapist Harvey Weinstein already serving a 23 year sentence in New York has been secretly indicted by a Los Angeles Grand Jury on 11 counts of rape and assault on 5 women in 2013-2014 and should soon be extradited to stand trial which if convicted would result of up to another 140 years in prison; perhaps in an appropriate bad karma, China, the creator of COVID-19, has discovered that its vaccine is not very effective (hate to say it and would hate to wish death on anyone but could not happen to more deserving country); backers of a recall effort for L.A. DA Gascon have formally started the process and have started the 160 day clock to obtain 580,000 signatures of registered voters to place a recall on the ballot https://recallgeorgegascon.com/; as the prosecution in the Chauvin will most likely next week and tensions in Minneapolis rise as the city nears a verdict, look to the political  cartoonist to more accurately display the difficulty of a fair trial: 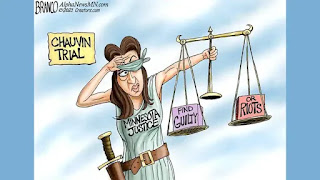 Chicago Gun Violence: HeyJackass.com is back to show that through April 10, 2021, gun violence involving mostly persons of color shooting persons of color in Chicago is alive and well with 864 persons shot of whom 157 have died.
As always, I hope you enjoy today’s holidays and observances, factoids of interest for this day in history, a musical link to “Can’t Buy Me Love” by the Beatles, that in enjoy advocating for animals that are recherché and a quote from Steve Wozniak on the Apple I and II and Jobs role, secure in the knowledge that if you want to send a gift for any memorable events like Mother’s Day, college graduations, birthdays, weddings, or anniversaries, you know that the Alaskanpoet can provide you with a unique customized poem at a great price tailored to the event and the recipient. Please contact me for the details on the pricing.
1. National Pet Day—created by Colleen Paige in 2005 to celebrate the joy and comfort pets provide and to promote understanding awareness of the millions of animals whose home is a shelter or in a pound awaiting euthanasia and the joy to be realized in opening one’s home to a shelter or pound animal.
2. National Ranch Water Day—first celebrated on this day in 2021 to promote the consumption of Ranch Water which is the Texas version of the Skinny Margarita also known as the “Official West Texas Cocktail consisting of tequila, lime juice and soda water.                        3. 1964 Number One Song—the number 1 song in 1964 on this day with a run of 5 weeks in that position was “Can’t Buy Me Love” by The Beatles to share number 1 status with 22 other songs that year and 10 other acts that recorded their first number 1 song.  Here is a recording by The Beatle of “Can’t Buy Me Love”:  https://www.youtube.com/watch?v=srwxJUXPHvE The Beatles invaded the U.S. in person and on the charts in 1964 with 5 number 1 songs that spent a total of 18 weeks in the number 1 position.
4. Word of the Day—today’s word of the day is “recherché” which means exotic or rare which describes to a tee too many of our endangered species.
5. Proof That Systematic Racism Is a Myth—celebrating the birth on this day in 1925 of white Viola Lizzio, a mother of 5 who heeded Martin Luther King, Jr’s call and traveled from Detroit to participate in the Selma to Montgomery protest marches but sad while taking fellow participants back to the Montgomery airport was shot and killed by KKK members firing from a passing car to die at age 39.

On this day in
a. 1968 President Lyndon B. Johnson signed into law the Civil Rights Act of 1968 banning discrimination in the sale, rental and financing of housing.
b. 1976 the Apple 1 was introduced.
c. 1986 in Dade County, Florida in broad daylight FBI agents were involved in a massive shootout with 2 wanted armored car and bank robbers who were killed but not before the outgunned FBI agents had 2 killed and 5 wounded, the aftermath of which shootout prompted the introduction of the .40 S&W round with its enhanced stopping power was introduced.
d. 1993 450 inmates rioted at the Southern Ohio Correctional Facility in Lucasville, Ohio, killing 9 inmates and one guard over conditions in the prison were in control for 11 days before the takeover ended and the prisoners returned to their cells.
e. 2002 over 200,000 demonstrators marched on the Presidential Palace in Caracas, demanding the Hugo Chavez resign prompting his supporters to open fire, killed 19 demonstrators.
Reflections on the Apple I: “Steve Jobs didn’t really set the direction of my Apple I and Apple II designs but he did the more important part of turning them into a product that would change the world. I can’t deny that.” Steve Wozniak, co-founder of Apple.             Please enjoy the poems on events of interest on my twitter   account below (if you like them, retweet, and follow me) and follow my blogs. Always good, incisive and entertaining poems on my blogs—click on the links below. Go to www.alaskanpoet.blogspot.com for Ridley’s Believe It Or Not—This Day in History,  poems to inspire, touch, emote, elate and enjoy and poems on breaking news items of importance or go to  Ridley's Believe It Or Not for just This Day in History.

© April 11, 2021 Michael P. Ridley aka The Alaskanpoet
Alaskanpoet for Hire, Poems to Admire
Poet Extraordinaire, Beyond Compare
A Unique Gift, All Recipients to Receive a Lasting Gift

Posted by Michael P. Ridley aka the Alaskanpoet at 2:19 AM