US Vaccinations: As of 4/14/2021 192 million doses have been given, 3.35 million per day in the last week (sounds impressive but if the rate does not increase it will take us now reduced to some 3 months to have 75% of the population vaccinated which many believe is necessary to develop herd immunity. In California 23,721,226 total doses have been given (76.9% of doses received to  near the U.S. average of 77.6%), but even with the pressure of a certain recall coming endangering Newsom, California has barely risen from 30th to 28th   out of the 50 states in terms of the percentage of doses administered as a percentage of doses delivered to the states and at 22% of its population fully vaccinated compared to the U.S. average of 23.1% has moved slightly up  from 38th tied with Nevada 36th tied with Nevada in terms of percentage of population fully vaccinated. A long way to go to get herd immunity and lagging in terms of getting vaccines received into arms and percentage of population vaccinated compared to other states and a great reason to recall this inept and hypocritical governor.

Non CV Case News: Officer Kim Porter was arrested on 2nd Degree Manslaughter and released on $100,000 bail (the same amount Wright posted following his arrest for armed robbery and assault in 2019 which was revoked for having a gun and not staying in touch with probation leading to his resisting arrest and death); Brooklyn Center’s Mayor Mike Elliot who is black instead of trying to claim tensions ordered a thin blue line flay removed from the police and then proceeded to intone cops don’t need guns to make traffic stops (must have had a senior moment to not know of the hundreds of the hundreds of cops over the years killed in making “routine” traffic stops); Hannity had a demonstrator on his show who was justifying throwing deadly objects at police, called Porter’s killing Wright an “act of war” and was outraged she was able to post bail (bail is supposed to insure appearance and we have a better chance of winning the Powerball than her not appearing for trial); Senator Kennedy is doing what too many on the left are not urging the public to remain calm until all the facts are in; in what must have surprised the reporters on the Cack News Network given their sympathetic stance toward BLM, several of them covering a demonstration against the killing of Daunte Wright were chased by demonstrators hurling objects at them forcing them to leave.

As the border surges continues and it is SRO at border detention facilities Governor Noem announced South Dakota will not take in any illegals the feds want to deposit in their state; Blues have announced they will introduce legislation to pack SCOTUS by increasing the size of SCOTUS to 13 and it will be a safe bet that those 4 additional judges will be of the leftist 9th Circuit Court of Appeals genre; on the vaccine front not helped by the news of the pause in J&J’s rollout of its vaccine due to reports of clotting and 1 death, 20% of Americans have indicated they are not going to be vaccinated; Biden has announced that after speaking with Bush and Obama but obviously not Trump that he is withdrawing all U.S. forces in Afghanistan by September 11, 2021, ending our war there for 20 years; it may be a pipe dream, but it appears that Blues in NYC are switching over to the Reds, tired of De Blasio’s ineptness and CV over the top responses; with Niki Haley as UN Ambassador we were blessed with a staunch America First diplomat willing and able to confront our foreign enemies but with her successor Linda Thomas-Green we are burdened with the tired old rant that we are a racist nation with white supremacy weaved through our founding documents and principles; it looks like Biden is going to lower the sanctions boom on Russia for its massive hacking of federal computers.
Backers of a recall effort for L.A. DA Gascon have formally started the process and have started the 160 day clock to obtain 580,000 signatures of registered voters to place a recall on the ballot https://recallgeorgegascon.com/; as Marxist head of BLM regales in her 4th home of $1.4 million, look to the political  cartoonist to more accurately portray hypocrisy of the two leftists trying be the biggest hypocrite: 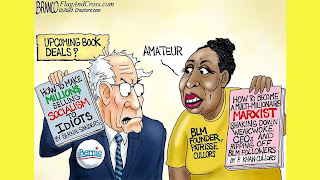 Chicago Gun Violence: HeyJackass.com is back to show that through April 132, 2021, gun violence involving mostly persons of color shooting persons of color in Chicago is alive and well with 899 persons shot of whom 163 have died.
As always, I hope you enjoy today’s holidays and observances, factoids of interest for this day in history, a musical link to “Happy Together” by The Turtles, that you are not a recreant person and a quote Bernard Rush on slavery, secure in the knowledge that if you want to send a gift for any memorable events like Mother’s Day, college graduations, birthdays, weddings, or anniversaries, you know that the Alaskanpoet can provide you with a unique customized poem at a great price tailored to the event and the recipient. Please contact me for the  details on the pricing.

1. Ex-Spouse Day--created by the Reverend Ronald Coleman and celebrated on this day since 1987 as a day to promote healing of the scars caused by divorce especially when children are involved and the custodial parent practices Parent Alienation Syndrome 24/7 against the noncustodial spouse. Since some 50 percent of marriages end in divorce many married individuals will have a chance to observe this day and hopefully restore bridges to regain an amicable relationship which will drive divorce lawyers crazy as their fee income will shrink.

2. National Pathology Assistants Day—the profession of pathology assistant was created in 1969 and the American Association of Pathology Assistants was formed in 1972 and its first convention held in 1974 to promote awareness of the done by PA’s in forensic science and to improve the standards of PA’s to better meet the needs of those needing or requiring a pathology report.

3. 1967 Number One Song—the number 1 song in 1967 on this day with a run of 3 weeks in that position was “Happy Together” by The Turtles to share number 1 status with 18 other songs that year and 7 other acts that had their first number 1 songi.  Here is a recording by The Turtles performing “Happy Together”: https://www.youtube.com/watch?v=mRCe5L1imxg  The Turtles were an American rock band that was formed by Mark Volman and Howard Kaylan in 1965 and had good success until it disbanded for the members to pursue separate careers.

4. Word of the Day—today’s word of the day is “recreant” which means craven, cowardly which describes to a tee the behavior of our politicians in dealing with our immigration chaos.

5.  Even on a Horse Hard to Outrun Drug—celebrating the birth on this day in 1987 of Michael Base, an up-and-coming jockey who was the leading rider at Del Mar and Hollywood Park in 2007, but was found dead for a drug overdose inside his Cadillac Escalade outside the stable area at Churchill Downs on May 10, 2011 at age 24.
On this day in:

a.       1775 in this nation so accused of systematic racism, Benjamin Franklin and Bernard Rush founded the colonies’ first abolition society, the Abolition Society for the Relief of Negroes Unlawfully Held in Bondage.

b.   1870 the New York City Museum of Metropolitan Art was founded.

c. 1988 the Soviet Union in a ceremony at Geneva pledged to withdraw its forces from its “Vietnam” in Afghanistan which it did.

d. 2003 U.S. forces captured Abu Abbas, the leaded of the PLO group that hijacked the MV Achille Lauro and killed disabled Jewish-American passenger and threw his body overboard; sadly Abass cheated hanging by dying of natural causes while in custody.

e. 2014 276 girls at a school in Chibok, Nigeria were kidnapped by Boko Haram and sadly only some 50 escaped from the trucks leading them away and 100 were ultimately released and the others were sold into marriage or have died.

Reflections on slavery from a Founding Father and co-founder of the first abolitionist society in the Colonies: “Slavery is so foreign to the human mind that the moral faculties, as well of those of the understanding, are debased and rendered torpid by it. All of the vices charged upon the negroes of the southern colonies and West Indies…are the genuine offspring of slavery and serve as an argument to prove they [African Americans] were not intended by Providence for it.” Bernard Rush

© April 14, 2021 Michael P. Ridley aka The Alaskanpoet
Alaskanpoet for Hire, Poems to Admire
Poet Extraordinaire, Beyond Compare
A Unique Gift, All Recipients to Receive a Lasting Gift

Posted by Michael P. Ridley aka the Alaskanpoet at 1:59 AM