April 9, 2021 Ridley's Believe It Or Not National Unicorn Day

CV Open Gate: Lost in the pronouncements by Biden and his lackeys that there is no crisis of illegals surging across the border is that fact that COVID-19 is alive and well and spreading in the Northern Triangle and Mexico which is 11th on my list of deaths from the pandemic at 1593/M and the 3 countries in the Northern Triangle in terms of active cases and deaths per million are as follows even though the data may be suspect as underreported:

US Vaccinations: As of 4/9/2021 179 million doses have been given, 3.03 million per day in the last week (sounds impressive but if the rate does not increase it will take us now reduced to some 3 months to have 75% of the population vaccinated which many believe is necessary to develop herd immunity. In California 21,725,654 total doses have been given (76.1% of doses received to  equal the U.S. average of 76.6%), but with the pressure of a certain recall coming endangering Newsom, California has risen up from 26th 30th  out of the 50 states in terms of the percentage of doses administered as a percentage of doses delivered to the states and at 19.8% of its population fully vaccinated has moved up from 37th  tied with Idaho  and North Carolina to 34th tied with Florida and Lousiana in terms of percentage of population fully vaccinated. A long way to go to get herd immunity and lagging in terms of getting vaccines received into arms and percentage of population vaccinated compared to other states and a great reason to recall this inept and hypocritical governor.

Non CV Case News:  Prince Phillip, the longest serving royal consort in British history has died at age 99, and Queen Elizabeth II will suspend her royal duties for 8 days of mourning;  on the state versus federal encroachment of the 10th Amendment, the Governor of Arizona has signed legislation preempting new federal statues or regulations impeding upon the rights of Arizona citizens to bear arms (do not be surprised that the issue will be headed to SCOTUS); with epidemic levels of homelessness across the nation, Reds are outraged that New York has created a $2 relief fund for illegals who have been damaged by the CV pandemic with one time payments of up to $15,600 to illegals who have lost their jobs (insanity as they are not supposed to be hired in the first place); in the Where’s Waldo for the Immigration Czar Harris, the Arizona AG is complaining he is getting no response from her on his invite to come to the border to see for herself the chaos created by the surge  (she has time to go to Chicago to visit a CV vaccination site); the budget for DHS is flat for fiscal 2022 despite the unprecedented surge in illegals and unaccompanied minors while Biden continues to blame Trump and lies that the increase is merely seasonal; Portland’s answer to soaring murders in the city is not for more police but rather Park Rangers armed with a taser and a radio (good luck against someone with a gun or maybe even a knife);  Perseverance which has been on Mars for 48 days is now transmitting weather reports from Mars showing the surface temperature was -4 Fahrenheit falling to -17 Fahrenheit and the helicopter Ingenuity also landed on Mars will soon be flying over the Martian surface remotely controlled; sadly, we have come accustomed to the MSM dropping the racist or sexist card all too frequently, but we should be appalled that AP in its obituary of Prince Phillip in the 3rd paragraph of its obituary could not restrain itself and noted that “He was known for his occasionally racist and sexist remarks”; in a reminder the world has become a noncivil Mrs. World of 2020 has been arrested for during this year’s pageant of ripping the crown off the head of the newly crowned Mrs. World of 2021 claiming she was divorced and therefore not eligible to win the award; Witless Whitmer with her draconian shutdown and arbitrary orders has the dubious distinction of being in first place in the number of CV cases per 1M people has now ordered all high schools in the state to close in person classes and go virtual for two weeks; no wonder police across the nation feel abandoned and frustrated as new reports reveal that Biden’s nominee to head the Civil Rights Division of the DOJ, Kirsten Clarke, while a student at Columbia Law School was an organizer of a conference where police were attacked and cop-killers were honored as “political prisoners; a safe bet is that colleges will require at minimum vaccinations of students living on campus and likely expanding that to any student enrolled (how soon before we require a vaccine passport to travel or get a job?); backers of a recall effort for L.A. DA Gascon have formally started the process and have started the 160 day clock to obtain 580,000 signatures of registered voters to place a recall on the ballot https://recallgeorgegascon.com/; as Biden unveils his first executive order on eviscerating the 2nd Amendment, leave it to the political cartoonist more accurately display the consequences: 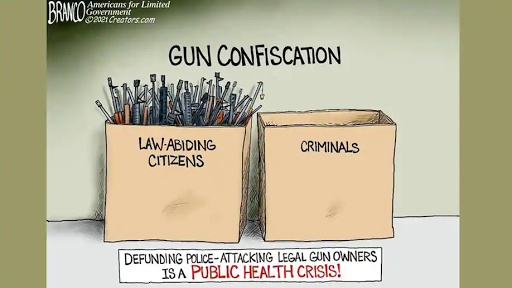 Chicago Gun Violence: HeyJackass.com is back to show that through April 8, 2021, gun violence involving mostly persons of color shooting persons of color in Chicago is alive and well with 837 persons shot of whom 153 have died.

As always, I hope you enjoy today’s holidays and observances, factoids of interest for this day in history, a musical link to “Johnny Angel” by Shelly Farbares, that in discussion your positions are not rebarbative and a quote from Bayard Rustin on the Journey of Reconciliation, secure in the knowledge that if you want to send a gift for any memorable events like Mother’s Day, college graduations, birthdays, weddings, or anniversaries, you know that the Alaskanpoet can provide you with a unique customized poem at a great price tailored to the event and the recipient. Please contact me for the details on the pricing.

1. National Unicorn Day—celebrating not those privately held companies backed by venture capital funds at higher and higher valuations but rather those mythical one horned horse like creatures that that can be found in myths of antiquity.

2. National Gin and Tonic Day—celebrating a drink that derives its popularity to the bark of the cinchona tree which contains quinine which Spanish explorers to Peru in the early 16th Century discovered that the Incas were using it to treat malaria and brought it back to Europe to treat and prevent malaria.  Quinine is extremely bitter until diluted which resulted in 1858 when quinine water came on the commercial market; Schweppes started marketing Indian Quinine Tonic for use by the administrators and soldiers of the East India Company which was conquering and ruling India and needed a means to fight malaria. Later the idea of gin being mixed with tonic water saw the light of day and the gin and tonic was born to rapidly become a favorite drink of the British both and home and in the colonies like India.

3. 1962 Number One Song—the number 1 song in 1962 on this day with a run of 3 weeks in that position was “Johnny Angel” by Shelley Farbares to share number 1 status with 20 other songs that year and 14 other acts that recorded their first number 1 song.  Here is a recording by Shelley Farbares of “Johnny Angel”:   https://www.youtube.com/watch?v=wwIYSofgpY0 Farbares was also a noted small screen actress who started appearing at the age of 3 as is best remembered as Mary Stone on the Donna Reed Show.

4. Word of the Day—today’s word of the day is “rebarbative” which means unattractive, repellant which if you are a gun owner describes to a tee what you feel about Biden’s gun control policies.

5. Down Drugs Down Under—celebrating the birth on this day in 1974 of noted Australian soap opera actress who went down down under in New South Wales, Australia on September 6, 2001 from a drug overdose.

a. 1947 the first Freedom Ride also known as the Journey of Reconciliation some 9 whites and 9 blacks to test compliance with the decision by SCOTUS in 1946 in the case of Irene Morgan v. The Commonwealth of Virginia that segregated seating on interstate commerce was unconstitutional started from Washington, D.C. enroute to Durham, North Carolina and returning to Washington, D.C. on the 23rd. The riders disobeyed the Jim Crow laws in effect in the states through which they travelled causing arrests and incarceration in a momentous beginning to end Jim Crow in the South and spurring more Freedom Riders in 1960 and 61.

c. 1981 the USS George Washington, the Navy’s first ballistic nuclear submarine, collided while underwater at periscope depth with a Japanese cargo ship, the Nissho Maru, causing it to sink in 15 minutes with the loss of 2 seamen with little damage to the submarine.

d. 2003 Baghdad fell to U.S. forces in the Second Gulf War which did not end the hostilities as Islamic insurgents came out of the woodworks in the coming years to try to kill American forces.

e. 2017 in a slogan be damned moment the skies became less friendly as Doctor Dao, a Vietnamese American, was forcibly removed from his reserved seat on UA Flight 3411 because he refused to vacate his seat on an overbooked flight as he was flying to see a patient. The incident captured on cell phones showed a polite but firm Dr. Dao being dragged off the plane suffering physical and emotional injuries which prompted a later lawsuit which UA settled in a confidential settlement.

Reflections on the Journey of Reconciliation leaving Washington, D.C. on April 9, 1947: “The Journey of Reconciliation was organized not only for devising techniques to eliminate Jim Crow in travel, but also as a training ground for similar peaceful projects against discrimination in such major areas as employment and the armed forces.” Bayard Rustin one of the organizers of the Freedom Ride.

Posted by Michael P. Ridley aka the Alaskanpoet at 11:39 PM