April 26, 2021 Ridley's Believe It Or Not World Intellectual Property Day

US Vaccinations: As of 4/25/2021 230.8 million doses have been given, 2.74 million per day in the last week (sounds impressive but if the rate does not increase it will take us now reduced to some 3 months to have 75% of the population vaccinated which many believe is necessary to develop herd immunity. In California 29,151,065 total doses have been given (80.7% of doses received to rise above drop below the U.S. average of 79.49%), but even with the pressure of a certain recall coming endangering Newsom, California has not moved from 24th  out of the 50 states in terms of the percentage of doses administered as a percentage of doses delivered to the states and at 28.8% of its population fully vaccinated compared to the U.S. average of 28.9% has risen to 31st tied with Oregon from sole possession of 32nd .  A long way to go to get herd immunity and lagging in terms of getting vaccines received into arms and percentage of population vaccinated compared to other states means a great reason to recall this inept and hypocritical governor.
Non CV News: It is now official our hypocritical and ineffective governor Gavin Newsom will face a recall as the Secretary of State has validated enough signatures on the recall petition to hold a recall election; the Oscars last night were so typical with several with acceptance speeches that sounded like they were prepared by BLM in terms of racist and police killing blacks rants (watch for the ratings to sink to all-time lows); Columbus had mostly peaceful protests of some 200 people who marched and blocked traffic for some period of time over knife wielding about to thrust it Ma’Khia who was shot by Columbus police officer Reardon to save the life of her intended victim caught on camera for all to see (to BLM no shooting even a shooting to prevent a murder is justified if the victim is black even if a black life is saved); a state of emergency has been declared in Elizabeth City, New Jersey as body cam videos of police shooting Alfred Brown, Jr. fleeing in his car as officers tried to executed a felony drug warrant (the lawyer representing the Brown family and who parlayed a $28 million wrongful death settlement in Floyd’s killing is already on scene to view the footage before it is released to the public); in Virginia a deputy who had given Isiah Brown a ride home an hour earlier responded to a 911 call of a domestic disturbance at his home and ended up shooting him ten times mistaking the cell phone in his hand to a gun (unless the body cam show Brown pointing the cell phone at the deputy, watch for potential riots if deputy is not criminally charged); the federalization of the police the left so urgently desires took another step forward to reality as the AG Merrick Garland on the heels of the announcement of its investigation of the Minneapolis Police Department announced a DOJ investigation of the Louisville Police Department due to the killing of Brianna Taylor during a no knock drug arrest warrant.
Our private jet hog climate czar John Kerry who as a private citizen was accused of undermining U.S. foreign policy toward Iran has been caught in a leaked tape disclosing to Iran some 200 instances of covert Israeli covert operations against Iran which The New York Times chose to bury (instead of “All the News That’s Fit to Print,” this leftist rag should change its masthead to “All the News Damaging to the Left Fit to Conceal”; even with the Census barred from determining the immigration status of residents, Blue run states like California and New York should lose House Seats when the 2000 Census reports come out; Apple Computer which has committed to invest nearly $500 million in the U.S. has announced a new research campus in North Carolina which will involve artificial intelligence and more importantly to the anti-business climate in the once Golden State, 3,000 high paying jobs; looks like Fauci is going to be making another flip flop, but this one driven by common sense and sorely needed that people outdoors do not need to wear  masks as the risk of infection spread is near nil; while some Oscar elitists were falsely claiming police were shooting blacks at the rate of 3 a day, the reality of black on black shootings in Blue run cities that BLM refuses to acknowledge in Chicago this weekend  resulted in 20 shootings 4 of which died with some 95% of these being color on color shootings; on the CV recovery front, Disney World is ramping up hiring as its capacity limits will soon be increased to the joy of workers looking at a minimum wage of $14 an hour; in a far too frequent example of lawmakers believing they are above the law, Michigan Blue State Representative Jewell Jones stopped for a DUI following a collision is shown on a car cam of threatening the 2 officers by calling Governor Witless Whitmer because he control their budget and then resisting arrest (BAT of twice the limit and conviction will put this rising star of the Blues in prison up to 2 years).
Backers of a recall effort for L.A. DA Gascon have formally started the process and have started the 160 day clock to obtain 580,000 signatures of registered voters to place a recall on the ballot https://recallgeorgegascon.com/; as the Blues continue to push the idea of equity by creating funding programs that only people of color are beneficiaries of,  leave it to the political cartoonist to expose the consequences of  programs of equity as opposed to promoting equality: 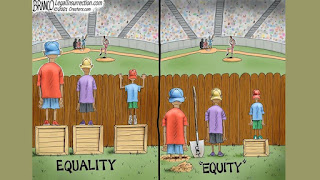 Chicago Gun Violence: HeyJackass.com is back to show that through April 25, 2021, gun violence involving mostly persons of color shooting mostly persons of color in Chicago is alive and well with 991 persons shot of whom 179 have died.
As always, I hope you enjoy today’s holidays and observances, factoids of interest for this day in history, a musical link to “Philadelphia Freedom” by Elton John, having a fine refection and a quote by Marl Lynas on Chernobyl,  secure in the knowledge that if you want to send a gift for any memorable events like Mother’s Day, college graduations, birthdays, weddings, or anniversaries, you know that the Alaskanpoet can provide you with a unique customized poem at a great price tailored to the event and the recipient. Please contact me for details on the pricing.
1. World Intellectual Property Day—created by the World Intellectual Property Organization in 1990 and first celebrated on this day in 2000 to promote the recognition of the importance of intellectual property to our economy and culture and to advocate for stronger protections to prevent its theft by some of the world’s bad actors like China.
2.  Dissertation Day—created in 2018 by Dr. Russell Strickland, founder of Dissertation Done, to promote support and understanding for doctoral candidates have to endure to finalize the dissertation they must complete in order to receive their Ph.D.
3.  1975 Number 1 Song USA—the number 1 song in 1975 was “Philadelphia Freedom” by The Elton John Band on a run of 2 weeks in that position to join 34 other songs reaching number 1 in a year in which marked the most number 1 songs and the longest period of time in Billboard’s history that there was a new number 1 song each week—January 11, 1975 to April 12, 1975 (14 weeks).  Here is a recording by The Elton John Band of “Philadelphia Freedom”:  https://www.youtube.com/watch?v=2sd6P2Tu8r. Sir Elton John is probably one of the successful artists of all time with his song sung at Diana’s funeral “Candle in the Wind” having the distinction of recording sales of 32 million copies. He is still going strong at 74.
4.  Word of the Day—the word for today is “refection” which means a meal, especially a light one which as the percentage of the population which is obese continues go off the charts too many of us chose to shun.
5.  Stand by Your Man—celebrating the birth on this day in 1956 of American actress, model, and photographer perhaps best known for her 2 year relationship with Prince Andrew who when revelations starting circulating about his connection to Jeffrey Epstein and trips on the “Lolita Express defended him as a “good man.”                                                   On this day in
a. 1937 in a chilling preview of what bombers could do to cities, planes of the Condor Legion flown by Nazi Germany’s Luftwaffe and Italy’s Aviazione Legionaria during the Spanish Civil War bombed Guernica, Spain, killing 1654 civilians to terrify the civilian population. The bombing of a defenseless city was memorialized in Picasso’s iconic painting Guernica.
b. 1981 Doctor Michael Harrison of the University of California San Francisco Medical Center performed the first open fetal surgery etsn61 Robert Noyce was granted a patent for the integrated circuit.
c. 1986 Reactor Number 4 at the Chernobyl, now part of the Ukraine suffered a core meltdown in one of the most serious nuclear reactor accidents in history resulting in massive radiation leakage and the creation of an exclusion zone with a 19-mile radius.                  d. 2018 Comedian Bill Cosby was convicted of sexual assault and sentenced to 3 to 10 years and is now serving that sentence at SCI Phoenix in Skippjack Township Pennsylvania.            e.  2019 Marvel Studios released in time to escape the theater shutdowns caused by the COVID-19 pandemic The Avengers: Endgame which became the highest grossing film in history, surpassing Avatar.

Reflections on the Chernobyl Disaster: “At 1.24 am on 26 April 1986 Chernobyl’s Unit 4 reactor exploded after staff disabled safety systems and performed an ill-advised experiment to check – ironically enough – the reactor’s

© April 26, 2021 Michael P. Ridley aka The Alaskanpoet
Alaskanpoet for Hire, Poems to Admire
Poet Extraordinaire, Beyond Compare
A Unique Gift, All Recipients to Receive a Lasting Gift

Posted by Michael P. Ridley aka the Alaskanpoet at 8:02 PM