April 13, 20212 Ridley's Believe It Or Not International FND Awareness Day

US Vaccinations: As of 4/13/2021 192 million doses have been given, 3.28 million per day in the last week (sounds impressive but if the rate does not increase it will take us now reduced to some 3 months to have 75% of the population vaccinated which many believe is necessary to develop herd immunity. In California 23,227,199 total doses have been given (78.1% of doses received to  near the U.S. average of 78.4%), but even with the pressure of a certain recall coming endangering Newsom, California has barely risen from 31st to 30th out of the 50 states in terms of the percentage of doses administered as a percentage of doses delivered to the states and at 21.6% of its population fully vaccinated has moved slightly up  down from 39th  tied with Florida to 38th tied with Nevada in terms of percentage of population fully vaccinated. A long way to go to get herd immunity and lagging in terms of getting vaccines received into arms and percentage of population vaccinated compared to other states and a great reason to recall this inept and hypocritical governor.
Non CV Case News: Collateral damage from the Wright killing as the  chief of police of Minneapolis and the shooting officer Kim Porter resigned, the city manager was fired for urging no rush to judgment and Minneapolis underwent a  3rd night of rioting with 60 arrest with 2,000 National Guard on its streets as a decision of whether and with what to charge Officer Porter with is expected tomorrow (if she is not charged with something less than involuntary manslaughter safe bet is a massive riot and Chauvin kissing any chance of a fair verdict; Rep. Talaib as to be expected poured gasoline on the fire by calling for an end to policing and incarceration; the looting of 20 stores in Minneapolis following Wright’s death in the eyes of the MSM like the Cack News Network is whitewashed as a “protest” (call it what is was and you might regain a shred of long ago lost credibility); despite Talib’s call for an end to policing, police in Branford, Connecticut responded to a report of shots fired, and were fired upon when they arrived with a shootout ensuing after they announced they just wanted to talk to the shooter which sadly ended in his death.
When it comes to free speech Twitter tells us to pound sand as it deleted black columnist Jason Whitlock’s Twitter account for criticizing BLM founder Patrisse Cullors’ $1.4 million purchase of an estate near Malibu because it violated its rules on publishing private information (what an absolute crock as news of the purchase was reported and purchase price would be available in L.A. County Recorder’s office showing transfer tax paid computed on the purchase price; on the CV front, Johnson and Johnson, following the death of one woman out of the 7 million who have received the one shot vaccine, has halted clinical trials and suspended its roll out in Europe; in secret recordings of CNN’s technical director of news by Project Veritas,  he admits what many of us believe is the Holy Grail, that CNN was tasked to create propaganda not report news to insure that Trump was not reelected and bragged about CNN’s role in insuring Biden’s reelection;  finally on April 28, Biden will deliver his SOTUS to a Joint Session of Congress; it is now being revealed that Andrew Cuomo has indicated in no uncertain terms that he feels he is like Sonny Corleone of The Godfather in terms of  his ability to intimidate people (the time has come to impeach this arrogant tyrant and better yet prosecute him over his deliberate underreporting and lying and concealing the facts  about the extent of the nursing home deaths).
Backers of a recall effort for L.A. DA Gascon have formally started the process and have started the 160 day clock to obtain 580,000 signatures of registered voters to place a recall on the ballot https://recallgeorgegascon.com/; as Biden continues pass off his $2 trillion welfare enhancement as infrastructure building and repair, look to the political  cartoonist to more accurately portray the reality of his attempt to disguise the reality of his plan. 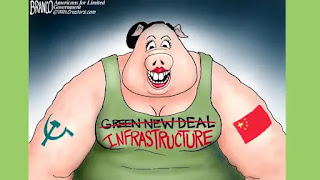 Chicago Gun Violence: HeyJackass.com is back to show that through April 12, 2021, gun violence involving mostly persons of color shooting persons of color in Chicago is alive and well with 887 persons shot of whom 159 have died.
As always, I hope you enjoy today’s holidays and observances, factoids of interest for this day in history, a musical link to “(You’re My) Heart and Soul” by The Righteous Brothers, that you finding a new restaurant that is recondite and a quote from Panel 4 of the Jefferson Memorial, secure in the knowledge that if you want to send a gift for any memorable events like Mother’s Day, college graduations, birthdays, weddings, or anniversaries, you know that the Alaskanpoet can provide you with a unique customized poem at a great price tailored to the event and the recipient. Please contact me for the details on the pricing.
1. International FND Awareness Day--created by the Bridget Mildon on this day in 2013 to promote awareness of Functional Neurological Disorder which is the result of problems in interface between the brain and body and how signals are transmitted or received and manifests itself in a variety of symptoms like limb weakness or seizures.
2. National SCRABBLE Day—celebrating that great board game created by Alfred Butts, an architect thrown out of work by the Great Depression, who created the game then known as Lexicon  in 1933 and after being turned down by game manufacturers to James Brunot who with Butts tweeked the rules and changed the name to “SCRABBLE” in 1948 and started selling the game with great difficulty until Macy’s got wind of the game and sales took off resulting in the Brunots licensing to Seichow and Righter the rights to manufacture, distribute and sell the game which they did successfully to buy the trademark in 1972 to sell to Coleco and after  that company went B/K, Hasbro acquired the assets to continue making and selling the game today.
3. 1966 Number One Song—the number 1 song in 1966 on this day with a run of 3 weeks in that position was “(You’re My) Soul and Inspiration” by the Righteous Brothers to share number 1 status with 25 other songs that year.  Here is a recording by The Righteous Brothers performing “(You’re My) Soul and Inspiration”: https://www.youtube.com/watch?v=mzrPs-hLKmM  Bill Medley and Bobby Hatfield formed the duo in 1963 and performed as a duo until 1968 to go on to sole careers until 1975 to reunite as a duo briefly and reunite again in 1981 to perform and tour together until Hatfield died of a heart attack in 2003 with cocaine in his system.
4. Word of the Day—today’s word of the day is “recondite” which means little known or out of the which describes the vacation spot or fishing hole we all would like to find.
5. A Distinction Not Sought—celebrating the birth on this day in 1945 of James Kelsu who as a rookie was the stating guard for the Buffalo Bills in the 1968 season and the team’s rookie of the year but having been enrolled in ROTC had to fulfill his military obligation and entered the Army as a second lieutenant and arrived in South Vietnam as a member of the 101st Airborne in November, 1969 leaving a wife who was pregnant and a 2 year old daughter to die in a mortar attack on Fire Base Ripcord on July 21, 1970, two days before his wife gave birth to a baby boy. He was the last of only two NFL players to die in the Vietnam War.
On this day in:

a.   1870 the New York City Museum of Metropolitan Art was founded.
b. 1943 The Jefferson Memorial was dedicated in Washington, D.C.
c. 1964 Sidney Poitier became the first African American to win a Oscar as Best Actor for his performance in Lilies of the Field.
d. 1976 the Treasury Department reintroduced the Jefferson $2 Bill on the anniversary of Jefferson’s 233rd birthday as part of the U.S. Bicentennial Celebration.
e. 1997 Tiger Woods won his first Master’s at the age of 21, as the youngest to win it and won it with a record low scoring 270 that would stand until 2020.

Reflections from the Jefferson Memorial as edited in red and deleted in black on Panel 4: "I am certainly not an advocate for frequent and untried changes in laws and constitutions. I think moderate imperfections had better be borne with; because, when once known, we accommodate ourselves to them, and find practical means of correcting their ill effects. But I know also that laws and institutions must go hand in hand with the progress of the human mind. As that becomes more developed, more enlightened, as new discoveries are made, new truths disclosed, and manners and opinions change with the change of circumstances, institutions must advance also, and keep pace with the times. We might as well require a man to wear still the coat which fitted him when a boy, as civilized society to remain ever under the regimen of their barbarous ancestors." - Jefferson to H. Tompkinson (AKA Samuel Kercheval), July 12, 1816
Please enjoy the poems on events of interest on my twitter   account below (if you like them, retweet, and follow me) and follow my blogs. Always good, incisive and entertaining poems on my blogs—click on the links below. Go to www.alaskanpoet.blogspot.com for Ridley’s Believe It Or Not—This Day in History,  poems to inspire, touch, emote, elate and enjoy and poems on breaking news items of importance or go to  Ridley's Believe It Or Not for just This Day in History.

© April 13, 2021 Michael P. Ridley aka The Alaskanpoet
Alaskanpoet for Hire, Poems to Admire
Poet Extraordinaire, Beyond Compare
A Unique Gift, All Recipients to Receive a Lasting Gift

Posted by Michael P. Ridley aka the Alaskanpoet at 12:36 AM