US Vaccinations: As of 4/22/2021 219 million doses have been given, 2.95 million per day in the last week (sounds impressive but if the rate does not increase it will take us now reduced to some 3 months to have 75% of the population vaccinated which many believe is necessary to develop herd immunity. In California 27,384,986 total doses have been given (78.1% of doses received to  exceed the U.S. average of 77.6%), but even with the pressure of a certain recall coming endangering Newsom, California has dropped  from 24th tied with Oregon to in sole possession of 25th  out of the 50 states in terms of the percentage of doses administered as a percentage of doses delivered to the states and at 26.6% of its population fully vaccinated compared to the U.S. average of 26.9% has increased slightly up from 33rd to 32nd.  A long way to go to get herd immunity and lagging in terms of getting vaccines received into arms and percentage of population vaccinated compared to other states and a great reason to recall this inept and hypocritical governor.
Non CV News: While leftists like Joy Behar even after seeing the videos, are inanely pontificating that the Columbus police officer should have shot into the air instead of killing Ma’Khia who her foster parent was claiming was a “loving girl” the cop’s body cam and a neighbor’s surveillance video clearly show her charging in to attack and the cop having a mere split second decision to shoot and prevent a death or not shoot and then as Ma’Khia continued to stab shoot and have two dead girls (he did the right thing and the MSM who are claiming an example of systematic racism do not belong on the air; the from the troika of see no evil the Lakers, the NBA and Lebron James’s sponsors the deafening sounds of silence over his deleted tweet of threatening revenge of the Columbus cop who took a life to save a life; the Cack News Network were in typical form giving a Columbus African American City Council Member a podium to pontificate having a social worker there would have prevented the shooting but staying silent and not asking her the basis for that inane opinion; the divide in the House reared its ugly reverse racist head when during the debate of the D.C. statehood bill, Blue Rep Mondaire Jones, an African American from New York accused Reds of opposing the bill because D.C. was not “white enough” ignoring the real reason that statehood would hand the Blues an in perpetuity 2 Senate seats ( the bill passed on strict party lines with not one Red voting in favor of it; in what looks like the fallacy of “give a mouse a cookie” to appease, the BLM activists have announced they are not leaving the new “autonomous zone” of George Floyd until after the verdicts in the 3 other officers charged in Floyd’s death and the city meets a list of 2 dozen demands (looks like a déjà vu of Seattle and jury intimidation of those unfortunate enough to have to sit on that jury).
Biden looks like he is hell bent to kill the Golden Goose that has saved California’s potential CV induced collapse of tax revenues disaster due to capital gains from venture capital backed companies going public as he wants to raise the capital gains tax on the wealthy to 43.6% prompting as might be expected a loss of 321 on the Dow Jones today; Virginia strikes a blow under the guise of equity in education for blacks and foster stupidity by canceling advanced math classes prior to the 11th grade (with public schools in abject failure mode for urban students why dumb down stem classes which is an area we need and lag behind the world?); in a rarity the Blue Mayor of Albany Kathy Sheehan supported he police in removing protestors creating an encampment in front of a police station as the removal process turned violent; BLM protestors stormed the Oklahoma State Capitol protesting Red bills granting some immunity for motorists fleeing a riot and increasing penalties for blocking traffic and one preventing police and their families from “doxing”; in a Where’s Waldo response Harris will not be visiting the border where she seems oblivious to the crisis there but at a leisurely pace will visit El Salvador, Guatemala, and Honduras in June but she had time to inanely intone that climate change is the root cause of migration ( guess drug violence, cartels and corruption previously obvious choices don’t merit her hit list); biased pseudo “journalist” Paul Krugman for The New York Times needs to visit his optician to removing his blinding cataracts as he claims the BLM is the best behaved protest movement in history and the riots, burning and looting that this nation has had to endure are “make believe of the GOP”.

Backers of a recall effort for L.A. DA Gascon have formally started the process and have started the 160 day clock to obtain 580,000 signatures of registered voters to place a recall on the ballot https://recallgeorgegascon.com/; after the Chauvin verdict and its guilty on all counts in a few hours, leave it to the political cartoonist to point out the new normal facing whites in a systematic racist culture: 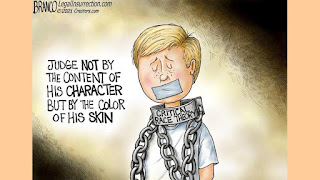 Chicago Gun Violence: HeyJackass.com is back to show to us that through April 21, 2021, gun violence involving mostly persons of color shooting persons of color in Chicago is alive and well with 952 persons shot of whom 174 have died.
As always, I hope you enjoy today’s holidays and observances, factoids of interest for this day in history, a musical link to “Joy to the World” by Three Dog Night, that you are quick to call out people for falsehoods and a quote by Beryl Hutchison, member of the First Aid Nurse Yeomanry following a gas attack, secure in the knowledge that if you want to send a gift for any memorable events like Mother’s Day, college graduations, birthdays, weddings, or anniversaries, you know that the Alaskanpoet can provide you with a unique customized poem at a great price tailored to the event and the recipient. Please contact me for details on the pricing.
1. Earth Day—announced by Senator Gaylord Nelson in September 1969 and first celebrated on this day in 1970 to promote measures to preserve the environment and prevent destruction and impairment of our ecosystem of the only home we have until years off in the future we colonize Mars.
2. National Teach Children to Save Day—created by the American Bankers Association Educational Foundation and first celebrated on April 17, 1997 on a different day in April each year during April which is National Finance Literacy Month to promote in children the idea of starting to save early in life and continue that habit throughout their life.
3. 1971 Number 1 Song USA—the number 1 song in 1970 was “Joy to the World” by Three Dog Night on a run of 6 weeks in that position to join 18 other songs reaching number 1, one of which was awarded to Janis Joplin posthumously as the second artist to be so awarded. Here is a recording by Three Dog Night of “Joy to the World”:  https://www.youtube.com/watch?v=kyI1OImD7ow The band was formed in 1967 and debuted at Whiskey-A-G0-Go and took its name from Australian Aborigines’ practice of sleeping in a hole on cold nights with a dingo. The band had 21 top 40 Hits and 3 Number 1 songs until it dissolved as a victim of the disco music surge in the 70’s and disbanded in 1976 to reunite in 1981 and with only two of the original members of the band, Hutton and Allsup still performing the band is still performing today.
4.  Word of the Day—the word of the day is “redargue” which means to refute which a free press is prone to do when a government oversteps its bounds which sadly our MSM too busy lauding Biden and the BLM is loath to do.
5.   H and T Don’t Mix—celebrating the birth on this day in 1935 of Paul Chambers, a noted jazz double bassist player who despite fame and fortune and critical acclaim developed a proclivity for heroin and alcohol and after checking into a hospital for what he believed to be influenza was diagnosed as having tuberculosis probably brought on by his heroin and alcohol addictions and quickly went into a coma for 18 days, dying on January 4, 1969 at age 33.
On this day in
a.  1864 the U.S. Congress passed the  Coinage Act of 1964 which authorized the use of “In God We Trust” on all coins.

b.  1915 the German Army during the Battle of Ypres released 168 tons of chlorine gas from 5730 cylinders to drift with the prevailing wind into French lines which broke and fled in total panic and disarray from the oncoming green clouds.
c.  1944 in a glimpse into the future of warfare, the US. Air Commando Group in the India Burma Theatre used helicopters in combat for the first time using Sikorsky R-4 helicopters in search and rescue combat operations.
d. 1977 optical fiber was used to transmit telephone conversations for the first time..
e. 2016 the Paris Accords, designed to reduce carbon emissions but in reality, giving China and India two of the largest emitters of carbon a free carbon emitting pass, was signed. t                                            Reflections on the use of poison gas: “So we went and climbed that long hill at Montreuil and got to the holy of holies, and were duly admitted. And sent in to an enormous room – yards of room – it was under the castle there, you know what these French castles are. And at the far end was this enormous table with officers dotted all around as though it was a stage set. So we trotted up, our knees shattering not knowing whether we were going to be executed as spies or not! And it appears they hadn’t had any real word about the gas attack and the effects. And they started asking us about it, ‘Were our respirators any good?’ And we said no, they weren’t, they were just little bits of wet cotton wool. And all those sorts of questions as they had no idea about what the gas attack was.” Beryl Hutchinson, a member of the First Aid Nursing Yeomanry, helped treat gassed soldiers. Afterwards, she was summoned to British General Headquarters.

© April 22, 2021 Michael P. Ridley aka The Alaskanpoet
Alaskanpoet for Hire, Poems to Admire
Poet Extraordinaire, Beyond Compare
A Unique Gift, All Recipients to Receive a Lasting Gift

Posted by Michael P. Ridley aka the Alaskanpoet at 6:55 PM