Guatemala:  Active cases:     11,078     Deaths/M 384
Honduras:     Active cases:   114,549     Deaths/M 475
El Salvador:   Active cases:     1,103      Deaths/M 315
US Vaccinations: As of 4/9/2021 179 million doses have been given, 3.03 million per day in the last week (sounds impressive but if the rate does not increase it will take us now reduced to some 3 months to have 75% of the population vaccinated which many believe is necessary to develop herd immunity. In California 21,725,654 total doses have been given (76.1% of doses received to  equal the U.S. average of 76.6%), but with the pressure of a certain recall coming endangering Newsom, California has risen up from 26th 30th  out of the 50 states in terms of the percentage of doses administered as a percentage of doses delivered to the states and at 19.8% of its population fully vaccinated has moved up from 37th  tied with Idaho  and North Carolina to 34th tied with Florida and Louisiana in terms of percentage of population fully vaccinated. A long way to go to get herd immunity and lagging in terms of getting vaccines received into arms and percentage of population vaccinated compared to other states and a great reason to recall this inept and hypocritical governor.
Non CV Case News:  Any thoughts that the Blues and RINO’s had that Trump would fade away to the links of Mir-A-Lago have been dashed as he is addressing a major Red gathering tonight to rail against Biden and lay out how an America First campaign will recapture the House and take back the White House (explains the rash 2nd impeachment, the push to make the District of Columbia the 51st State securing in perpetuity 3 Electoral College votes and 2 Blue Senators and require universal mail in voting without the need for ID’s in all 50 states); in a shades of George Plimpton imposter roles, an imposter known on line as “Kasey Lego” Montagu represented a fictitious “White House News” managed to trick 4 journalists of the White House Press Corps to ask 4 questions of Psaki because as a supporter of a free press, he thought the press was not doing their job of holding Biden accountable with their softball questions; Michigan which has the dubious distinction of leading the nation in new CV cases per population has been hit with another example of Witless Whitmer’s Administration as after Whitmer urged residents with self-quarantined family members not to travel, her chief operating officer, Tricia Foster whose son had tested positive and missed the family trip, was posting on Facebook her vacationing in the Siesta Key in Florida (such arrogance and so typical of our political leaders); Whitmer who was on a short list for a VP slot but most likely was derailed because she is white has failed in her efforts to get additional vaccines t halt Michigan’s surge in cases; former Blue Mayor of Sebastopol and the city’s first marijuana entrepreneur Robert Jacob has been arrested for six counts of illegal sexual activity with a minor and is rotting in jail without bail; in a sickening déjà vu of the fatal Kitty Genovese’s fatal stabbing on March 16, 1964, police confirmed that during the broad daylight attack on an Asian woman witnessed by “security” in the lobby and possibly in the building no 911 calls were made; the feds have arrested 3 women for fraudulently obtaining $1.2 million in unemployment benefits using California prison inmates’ names (another example of Newsom’s inept handling the of his EDD during the pandemic and meriting recall); Ingenuity, the helicopter which was landed with Perseverance on Mars, has had its historic flight over the Martian surface delayed; SCOTUS has ruled that Newsom’s restrictions on in home religious gatherings was unconstitutional;; backers of a recall effort for L.A. DA Gascon have formally started the process and have started the 160 day clock to obtain 580,000 signatures of registered voters to place a recall on the ballot https://recallgeorgegascon.com/; as Biden unveils his first executive order on eviscerating the 2nd Amendment, leave it to the political cartoonist more accurately display what he intends to do by eliminating not just curbing its exercise with reasonable limitations like no machine guns: 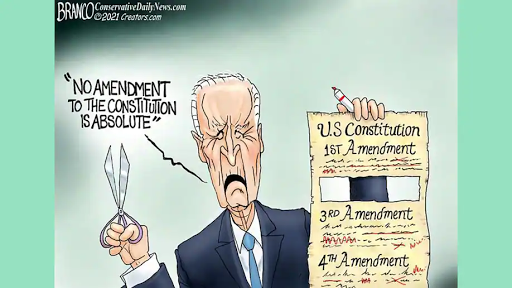 Chicago Gun Violence: HeyJackass.com is back to show that through April 8, 2021, gun violence involving mostly persons of color shooting persons of color in Chicago is alive and well with 839 persons shot of whom 154 have died.
As always, I hope you enjoy today’s holidays and observances, factoids of interest for this day in history, a musical link to “He’s So Fine” by the Chiffons, that in fulfilling your resolutions you are rarely guilty of recadency and a quote from Marie Sarantakis on cruelty to animals, secure in the knowledge that if you want to send a gift for any memorable events like Mother’s Day, college graduations, birthdays, weddings, or anniversaries, you know that the Alaskanpoet can provide you with a unique customized poem at a great price tailored to the event and the recipient. Please contact me for the details on the pricing.
1. ASPCA Day—celebrating and promoting work performed by the American Society for the Prevention of Cruelty to Animals which was incorporated in New York on this day in 1966.
2. Global Work at Home Day—created by Remote-how and celebrated on this day since 2019 in a serendipity event for those employers who like the rest of us had no clue what was in store for us before COVID originated in Wuhan later that year but who probably were far better prepared for the shutdown chaos the pandemic created.
3. 1963 Number One Song—the number 1 song in 1963 on this day with a run of 3 weeks in that position was “He’s So Fine” by The Chiffons to share number 1 status with 21 other songs that year and 18 other acts that recorded their first number 1 song.  Here is a recording by The Chiffons of “He’s So Fine”:   https://www.youtube.com/watch?v=rinz9Avvq6A The Chiffons were an all-female group of 3 high school classmates Judy Craig, Barbara Lee and Patricia Bennett who added Sylvia Peterson and whose “He’s So Fine” was their first and only #1 hit and who were active off and on through 1968.
4. Word of the Day—today’s word of the day is “recadency” which means falling back or relapsing which sadly is a fate suffered by those addicted to substance abuse.
5. Dying Doing What You Believe In—celebrating the birth on this day in 1979 of Rachel Corrie, a student at Evergreen State College and member of the International Solidarity Movement, a pro-Palestinian group, who organized an independent study program and was in Gaza in the city of Rafah on March 16, 2003 protesting the destruction of a house claimed by the IDF to have been used by terrorists attacking Israel when she was crushed to death by an Israeli bulldozer which the Israelis claimed was an accident as the operator in the cab could not see her and resulted in no charges brought and civil claims of wrongful death dismissed by the Israeli courts.
On this Day in
a. 1916 the Professional Golfers Association was formed in New York City.
b. 1939 Alcoholics Anonymous published its Big Book.
c. 1971 in a successful attempt to restore normalcy in relations between the U.S. and China while the Vietnam War was raging the U.S. Tennis Team was invited to China for a week to play exhibition matches in China which led to a weeklong visit by President Nixon from February 21-28, 1972.
d. 1998 the Good Friday Agreement was signed by the United Kingdom, Ireland and parties in Northern Ireland that would be effective on December 2, 1999 and bring an end to the violence known as “The Troubles” which had started in the late 60’s.
e. 2019 scientists at the Event Horizon Telescope released the first image of e a Black Hole in the center of the galaxy M-87 which fortunately for Earth is 53 million light years away from us.
Reflections on cruelty to animals: “If you don't like pictures of animal cruelty being posted on social media, you need to help stop the cruelty, not the pictures. You should be bothered that its happening, not that you saw it.”― Marie Sarantakis, author and former model and advocate of the raw food diet.
Please enjoy the poems on events of interest on my twitter   account below (if you like them, retweet and follow me) and follow my blogs. Always good, incisive and entertaining poems on my blogs—click on the links below. Go to www.alaskanpoet.blogspot.com for Ridley’s Believe It Or Not—This Day in History,  poems to inspire, touch, emote, elate and enjoy and poems on breaking news items of importance or go to  Ridley's Believe It Or Not for just This Day in History.

© April 10, 2021 Michael P. Ridley aka The Alaskanpoet
Alaskanpoet for Hire, Poems to Admire
Poet Extraordinaire, Beyond Compare
A Unique Gift, All Recipients to Receive a Lasting Gift

Posted by Michael P. Ridley aka the Alaskanpoet at 8:46 PM