April12, 2021 Ridley's Believe It Or Not Halifax Day (North Carolina)

US Vaccinations: As of 4/12/2021 190 million doses have been given, 3.21 million per day in the last week (sounds impressive but if the rate does not increase it will take us now reduced to some 3 months to have 75% of the population vaccinated which many believe is necessary to develop herd immunity. In California 23,031,055 total doses have been given (79.3% of doses received to  equal the U.S. average of 79.8%), but even with the pressure of a certain recall coming endangering Newsom, California has fallen from 28th to 31st out of the 50 states in terms of the percentage of doses administered as a percentage of doses delivered to the states and at 21.4% of its population fully vaccinated has moved down from 36th tied with Florida to 39th tied with Florida in terms of percentage of population fully vaccinated. A long way to go to get herd immunity and lagging in terms of getting vaccines received into arms and percentage of population vaccinated compared to other states and a great reason to recall this inept and hypocritical governor.
Non CV Case News: The killing  of 20 year old Daunte Wright, a black father of a 2 year old son, who was shot by a 25 year veteran female Minneapolis cop getting into his car to flee after a traffic stop for an air freshener hanging on his rear view mirror that revealed a warrant for failure to appear after being arrested for having a gun without a permit, resulted in a minor riot in Minneapolis last night and the firing of the City Manager who did not want a rush to judgment by firing her (the officer is claiming she thought she pulled the trigger on her taser after yelling “Taser” indicating she was going to use it which raises the obvious question as this has happened before—why are not tasers painted a bright color like orange or red as opposed to black?); despite the killing or Daunte Wright spawning a mini riot of attacks on police and looting, the judge in the Derek Chauvin refused to sequester the jury raising the question with the possibility of riot looming in the absence of a guilty verdict, how is Chauvin getting a fair trial (true to PC form NBC is demanding its reporters not refer to the riot last night as a “riot”, but jurors watching broadcasts of what happened will know what is was); at the Austin-West Magnet School in Knoxville, police were called due to reports of a man with a gun, a student who refused to come out of the bathroom and fired back hitting one officer in the leg to then be shot and killed by the officers.                   40% of the Marines who have been offered a vaccine for COVID-19 have turned it down prompting many Blues to demand that Biden mandate it; Pentagon announced new regulations permitting transgenders to serve in the military and receive medical treatment for gender alterations, ending Trump’s prior ban on their service; Kelyn Spandoni, dispatcher for the Jefferson Parish Sheriff’s Office has been fired and arrested for refusing to return $1.2 million deposited into her account in error by Schwab (this is a slam dunk felony to make someone wonder how dumb she or people advising her are); hard to believe in the PC and Counter Culture World, but a “White Lives Matter” protest in Huntington Beach on Sunday with about a crowd of some 500 protestors and counter protestors attending ultimately leading to 12 arrests as police tried to keep the peace; Prince Harry sans Meghan Markle who is pregnant and “advised” not to travel has arrived in England to attend his grandfather’s funeral on April 17 and quarantining as a houseguest at Frogmore Cottage.
Backers of a recall effort for L.A. DA Gascon have formally started the process and have started the 160 day clock to obtain 580,000 signatures of registered voters to place a recall on the ballot https://recallgeorgegascon.com/; as Biden continues his surge of Executive Orders and has named a panel to consider changing the number of justices on SCOTUS, look to the political  cartoonist to more accurately portray the goals of the Biden agenda: 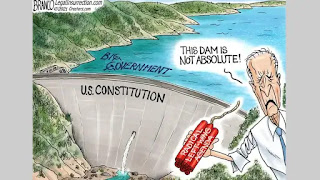 Chicago Gun Violence: HeyJackass.com is back to show that through April 10, 2021, gun violence involving mostly persons of color shooting persons of color in Chicago is alive and well with 881 persons shot of whom 159 have died.
As always, I hope you enjoy today’s holidays and observances, factoids of interest for this day in history, a musical link to “I’m Telling You Now” by Freddie and The Dreamers, that you are no someone who is obsessed like AOC in always pursuing i réclame and a quote from Victor David Hanson on misallocated American spending habits, secure in the knowledge that if you want to send a gift for any memorable events like Mother’s Day, college graduations, birthdays, weddings, or anniversaries, you know that the Alaskanpoet can provide you with a unique customized poem at a great price tailored to the event and the recipient. Please contact me for the details on the pricing.
1. Halifax Day (North Carolina)—commemorating the passage of what became to be known as the Halifax Resolves passed unanimously on this day in 1776 by the 83 members of the Fourth Provisional Congress at Halifax, North Carolina calling for independence from England which the first official act in the colonies in calling for independence.
2. National Only Child Day—Clueless who created this observance or when but as an only child obviously pleased someone did and suspect it was created by an only child with fond memories of not having to share toys or parents’ attention or wear hand-me-downs.             3. 1964 Number One Song—the number 1 song in 1965 on this day with a run of 2 weeks in that position was “I’m Telling You Now” by Freddie and The Dreamers to share number 1 status with 25 other songs that year and 13 other acts that recorded their first number 1 song.  Here is a recording by Freddie and The Dreamers performing “ I’m Telling You Now” on a very young Merv Griffin hosting the Merv Griffin Show ala Johnny Carson with a lit cigarette in an ashtray in front of him: https://www.youtube.com/watch?v=kUqjuAUus5Y Freddie Garrity, a former milkman, founded the band in Manchester and they were to first of 3 Manchester bands to be part of the British Invasion and performed until disbanding in 2000.
4. Word of the Day—today’s word of the day is “réclame” which means  having  a hunger for publicity which aptly describes AOC’s 24/7 personality to a tee.
5. Partridges Fly to the Top—celebrating the birth on this day in 1950 of noted actor, singer, guitarist and songwriter David Cassidy best known for his role as Keith Partridge in the 70’s series The Partridge Family who was a teen heart throb singer for many years but struggled with alcohol abuse and was hospitalized for liver and kidney failure on November 18, 2017, came out of a medically induced coma 2 days later to die after being put on a liver transplant list on November 21, 2017 with these prophetic last words before dying—“So Much Wasted Time.”
On this day in:
a. 1945 President Franklin D. Roosevelt, in ill health and exhausted by the strain of World War II died while sitting for a portrait in Warm Springs, Georgia saying, “I have a slight headache” and then slumping over unconscious and dying several hours later from a massive cerebral hemorrhage, leaving Harry S. Truman to assume the office and ok the dropping of the A-bombs he had no idea we were developing on Hiroshima and Nagasaki.
b. General Simpson’s 9th Army crossed the Elbe River at Tangermünde only 50 miles from Berlin where it was halted by Eisenhower resulting in Berlin after the war being surrounded by Communist East Germany and later bifurcated by a wall dividing Berlin until it came down on November 9, 1989 and the end of East Germany due to reunification on October 3, 1990.
c. 1955 the polio vaccine developed by Jonas Salk to the joy of parents everywhere terrified that their child would be stricken by the disease was declared safe and effective by the FDA.
d. 1992 the Euro Disney Resort opened near Paris with the theme park Euro Disneyland both later with name changes to Paris Disneyland.
e. 1999 President Bill Clinton was cited for contempt of court and fined for intentionally giving false testimony in the sexual harassment case brought against him by Paula Jones and was later disbarred.
Reflections on misguided priorities: “Americans spend more money on Botox, face lifts and tummy tucks than on the age-old scourges of polio, smallpox and malaria.” Victor Davis Hanson noted Hoover Institution Martin and Illie Anderson Senior Fellow whose observation on this is spot on.
Please enjoy the poems on events of interest on my twitter   account below (if you like them, retweet, and follow me) and follow my blogs. Always good, incisive and entertaining poems on my blogs—click on the links below. Go to www.alaskanpoet.blogspot.com for Ridley’s Believe It Or Not—This Day in History,  poems to inspire, touch, emote, elate and enjoy and poems on breaking news items of importance or go to  Ridley's Believe It Or Not for just This Day in History.

© April 12, 2021 Michael P. Ridley aka The Alaskanpoet
Alaskanpoet for Hire, Poems to Admire
Poet Extraordinaire, Beyond Compare
A Unique Gift, All Recipients to Receive a Lasting Gift

Posted by Michael P. Ridley aka the Alaskanpoet at 11:17 PM