April 8, 2021 Ridley's Believe It Or Not International Romani Day

US Vaccinations: As of 4/8/2021 175 million doses have been given, 3.04 million per day in the last week (sounds impressive but if the rate does not increase it will take us now reduced to some 3 months to have 75% of the population vaccinated which many believe is necessary to develop herd immunity. In California 21,243,518 total doses have been given (76.2% of doses received to  equal the U.S. average of 76.2%), but with the pressure of a certain recall coming endangering Newsom, California has risen up from 28th to 26th out of the 50 states in terms of the percentage of doses administered as a percentage of doses delivered to the states and at 19.2% of its population fully vaccinated has moved up from 36th  tied with Idaho to 37th tied with Idaho and North Carolina in terms of percentage of population fully vaccinated. A long way to go to get herd immunity and lagging behind in terms of getting vaccines received into arms and percentage of population vaccinated compared to other states and a great reason to recall this inept and hypocritical governor.
Non CV Case News:  Biden fresh from his 4 Pinocchio’s on the Georgia election law is pronouncing that his first trench of expected executive orders on gun control do not violate the 2nd Amendment (may be right with respect to unserialized ghost guns and gun owners await with trepidation over what is next); Psaki dismissed the numerous calls between Biden and Obama merely close friendship while many Reds suspect given Biden’s perceived mental degradation an attempt to create a 3rd Obama term; U.S. taxpayers are spending $60 million a week to become the bloated nanny state to house unaccompanied minors while we have thousands of homeless with children; while Harris remains MIA on the border crisis, DHS Secretary  Majorakis has made his 3rd trip to the border, meeting with sheriffs of counties on the border with apparently some agreement for weekly meetings (keep your fingers crossed that some sane border protection polices in existence during Trump will be restored); we now know that Stacey Abrams pressured MLB to move the MLB All Star Game out of Atlanta and thereby deprive the city of some $100 million in revenue and it is refreshing to hear 2 times winning World Series pitcher David Wells condemn the movement and affirm his commitment  to not watch any more MLB games (mix politics especially politics with a false narrative and you face the 2 edged sword of boycott); on the baseball front for the Chicago White Sox’s home opener, Mayor Lightfoot and Governor Pritzker were booed heavily when they walked out on the field, much louder that the boos reserved for the Kansas City Royals; March a month in Biden’s eyes there was no crisis, a decade record 19,000 CBP encounters with unaccompanied minors, yet Biden still blames Trump; Pelosi whose credibility for veracity is nil drove her head further under the sand to claim that the Biden Administration has the border under control; the COVID-19 yo-yoing CDC is now proclaiming that racism is a public health hazard (stick to medicine CDC and you might reclaim some of the credibility you have lost during the pandemic); as the prosecution is putting on experts that Floyd died from the flow of oxygen due to Chauvin’s knee as opposed to fentanyl in his system, Clooney displayed his ego of knowing all things by advising Floyd’s lawyer how to rebut the defense argument (Clooney an ability to memorize a script does not convey any degree of intelligence!); backers of a recall effort for L.A. DA Gascon have formally started the process and have started the 160 day clock to obtain 580,000 signatures of registered voters to place a recall on the ballot https://recallgeorgegascon.com/; as Biden continues to belie the border surge of illegal immigrants including minor children because he has announced that now is not the time from them to come, leave it to the political cartoonist to disconnect the reality of the situation from his hypocrisy: 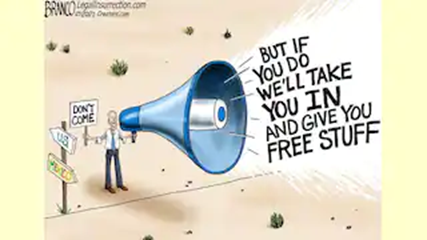 Chicago Gun Violence: HeyJackass.com is back to show that through April 7, 2021, gun violence involving mostly persons of color shooting persons of color in Chicago is alive and well with 834 persons shot of whom 154 have died.                        As always, I hope you enjoy today’s holidays and observances, factoids of interest for this day in history, a musical link to “Blue Moon” by The Marcels, that in discussion you are able to avoid  the razzmatazz and a quote from Caroline Elkins on the Mau Mau Rebellion, secure in the knowledge that if you want to send a gift for any memorable events like Mother’s Day, college graduations, birthdays, weddings, or anniversaries, you know that the Alaskanpoet can provide you with a unique customized poem at a great price tailored to the event and the recipient. Please contact me for the details on the pricing.                 1. National Alcohol Screening Day—created by the National Institute of Health in 1999 and observed on the Thursday of the first full week in April to promote the self-screening to determine whether a person has a substance problem and needs to address it.
2. International Romani Day—created by the International Romani Union in 1990 to raise awareness of the issues facing Romanis, including discrimination.
3. 1961 Number One Song—the number 1 song in 1961 on this day with a run of 3 weeks in that position was “Blue Moon” by the Marcels to share number 1 status with 21 other songs that year and 15 other acts that recorded their first number 1 song.  Here is a recording by the Marcels of “Blue Moon”:   https://www.youtube.com/watch?v=qoi3TH59ZEs The Marcels were formed in 1959 named after a popular female hair style at that time and were unusual in that they were integrated, but after success with “Blue Moon” and touring in the South, white audiences were not please top listen to an integrated group and the two white members left the band. Music may dissolve barriers but in the early 60’s in the South not the audience.
4. Word of the Day—today’s word of the day is “razzmatazz” which means meaningless talk, hype, or nonsense which is too often the currency of politicians.
5. Drinking Like a Fish Means Not Surviving Like a Fish--—celebrating the birth on this day in 1963 of noted hedge fund manager and TV business commentator Seth Tobias who sadly too early drowned in his pool on September 4, 2007 under the influence of alcohol, cocaine and Ambien.
On this day in:
a. 1913 the 17th Amendment was ratified, mandating the direct election of senators.
b. 1952 during the Korean War, President Harry S. Truman called for a seizure of the U.S. domestic steel industry, which attempt was overturned quickly by SCOTUS.
c. 1953 Jomo Kenyatta was convicted of fomenting the Mau Mau Rebellion in Kenya and sentenced to 7 years in prison to be released in 1959 and in Kenya’s first election after independence from England serve as president from December 12, 1963 until his death from natural causes on August 22. 1978.
d. 1975 Frank Robinson managed the Cleveland Indians in the first baseball game managed by an African American.
e. 1987 Al Campanis, the General Manager of the Dodgers resigned over racially disparaging remarks he had made on Nightline two days earlier.
Reflections on the casualties among Kenyans during the Mau Mau Rebellion: “I now believe there was in late colonial Kenya a murderous campaign to eliminate Kikuyu people, a campaign that left tens of thousands, perhaps hundreds of thousands, dead.” Caroline Elkins, noted historian of the Mau Mau Rebellion.
Please enjoy the poems on events of interest on my twitter   account below (if you like them, retweet and follow me) and follow my blogs. Always good, incisive and entertaining poems on my blogs—click on the links below. Go to www.alaskanpoet.blogspot.com for Ridley’s Believe It Or Not—This Day in History,  poems to inspire, touch, emote, elate and enjoy and poems on breaking news items of importance or go to  Ridley's Believe It Or Not for just This Day in History.

© April 8, 2021 Michael P. Ridley aka The Alaskanpoet
Alaskanpoet for Hire, Poems to Admire
Poet Extraordinaire, Beyond Compare
A Unique Gift, All Recipients to Receive a Lasting Gift