Tests: We have now conducted 437,068,081 tests (now at 1,314,196/M) compared to number 2 now France at 1,129,011/M) as we are conducting more tests in number and on a per capital basis for all nations (other than those nations that contain small populations like Bahrain, Denmark, Israel, Malta, Singapore and UAE) other than the U.K. which remains as king of the mountain with respect to tests at 2,163,097/M.
CV Open Gate: Lost in the pronouncements by Biden and his lackeys that there is no crisis of illegals surging across the border is that fact that COVID-19 is alive and well and spreading in the Northern Triangle and Mexico which is 12th on my list of deaths from the pandemic at 1650/M and the 3 countries in the Northern Triangle in terms of active cases and deaths per million are as follows even though the data may be suspect as underreported:

US Vaccinations: As of 4/23/2021 222.3 million doses have been given, 2.86 million per day in the last week (sounds impressive but if the rate does not increase it will take us now reduced to some 3 months to have 75% of the population vaccinated which many believe is necessary to develop herd immunity. In California 27,727,113 total doses have been given (78.1% of doses received to  exceed the U.S. average of 77.6%), but even with the pressure of a certain recall coming endangering Newsom, California has dropped  from 25th  in sole possession of 25th   out of the 50 states in terms of the percentage of doses administered as a percentage of doses delivered to the states and at 27.0% of its population fully vaccinated compared to the U.S. average of 27.5% has dropped from 32nd to 33rd.  A long way to go to get herd immunity and lagging in terms of getting vaccines received into arms and percentage of population vaccinated compared to other states and a great reason to recall this inept and hypocritical governor.

Non CV News: For Chauvin expecting to be sentenced in June, when it rains it pours as reports are out that the DOJ is looking  to perhaps charge him for his response to a domestic violence call in 2017 when he held his knees on the teen suspect’s neck for 17 minutes; to the relief of various state health officials, the CDC has ruled  the Johnson & Johnson vaccine can now continue to be injected into arms seeking vaccination; the Academy Awards Show will occur this Sunday at Union Station with attendance limited to 170 and the nominees appearing on camera not ratings; required to wear masks (more hypocrisy to damage their the show’s falling ratings; the FBI whose reputation was severely tarnished and damaged by Comey and the Russian Hoax took another hit as the paper that had received James Hodgkinson’s[mr1]  numerous letters to the paper castigating Reds and their policies before he tried to kill Red members practicing for their annual Congressional Baseball Game over the years published them to defunct the FBI’s theory that this was a “suicide by cop”;  in the Big Apple another example that when it comes to public safety, it is rotten to the core as Takim Newsom an arrested attempted released without bail after being stopped  and questioned and asked to step out of the car due to suspicion of DUI marijuana to back up and snare the officer and drag him some distance before he shook free.

The founder of BLM who is quick to attack any violation by her of the legal system as racist attacks by Reds is under fire in California for her BLM Movement not filing reports required for a nonprofit in California; backers of a recall effort for L.A. DA Gascon have formally started the process and have started the 160 day clock to obtain 580,000 signatures of registered voters to place a recall on the ballot https://recallgeorgegascon.com/; after all the climate change rants we hear daily, leave it to the political cartoonist to point out the difficulty alarming for climate change when you may have in the future face as opposed to weather to face today: 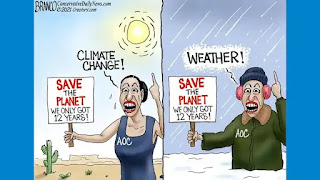 Chicago Gun Violence: HeyJackass.com is back to show that through April 221, 2021, gun violence involving mostly persons of color shooting persons of color in Chicago is alive and well with 967 persons shot of whom 177 have died.
As always, I hope you enjoy today’s holidays and observances, factoids of interest for this day in history, a musical link to “The First Time I Saw Your Face" by Roberta Flack,  that when you rede someone that person follows and a quote by Philip Bunnel, a Columbia Student present at its takeover in 1968, secure in the knowledge that if you want to send a gift for any memorable events like Mother’s Day, college graduations, birthdays, weddings, or anniversaries, you know that the Alaskanpoet can provide you with a unique customized poem at a great price tailored to the event and the recipient. Please contact me for details on the pricing.

1. World Book Day—created by UNESCO and first celebrated of April 23, 1995 to promote reading, publishing and copyright.

2.  UN English Language Day/ UN Spanish Language Day—a twofer created by the UN on this day in 2010 to promote multiculturalism and equal use of the 6 official languages of the UN—Arabic, Chinese, English, French, Spanish and Russian.

3. 1972 Number 1 Song USA—the number 1 song in 1972 was “The First Time I Saw Your Face” by Roberta Flack on a run of 6 weeks in that position to join 21 other songs reaching number 1 and 17 other acts achieving their first number 1 song. Here is a recording by Roberta Flack of “The First Time I Saw Your Face”: https://www.youtube.com/watch?v=VqW-eO3jTVU Flack has been performing since 1968 and still is today with 13 Grammy nominations and 4 winners.
4.  Word of the Day—the word of the day is “rede” means to counsel or advise and appropriately given World Book Day is pronounced the same as “read”.
5.  War Can Be Fashionable—celebrating the birth on this day in 1907 of noted model, photographer and Vogue photojournalist during World War II who took some 60,000 photos of the carnage, Elizabeth Lee Miller, but who was a heavy smoker and drinker and died too early on July 21, 1977 at the age of 70 from cancer most likely lung cancer. Here are three of her photos with the one on the left being one of the more iconic photos depicting the horror of the Holocaust:

a.  1914 the first MLB game was played at Wrigley Field then know as Weeghman Park.

b.  1940 a fire broke out at the Rhythm Club in Natchez, Mississippi due to the Spanish Moss hanging from the ceilings releasing methane gas from the insecticide use before the concert with the building packed with over 600 people and only one exit and one window not boarded up, resulting in 209 deaths including many members of the band playing and many injured. The fire ranks as the 4th deadliest fires in our history.

c.  1953 William Oates, a journalist working for AP was jailed on this day in 1951 in Czechoslovakia and charged with spying and after a coerced confession was sentenced to 10 years in prison only to be released shortly after the death of Joseph Stalin on May 16, 1953.

e. 1985 in a “if it’s not broke don’t fix it” moment, Coca Cola changed its originally formula that went over like a lead balloon, causing it to revert to the original in 3 months.

Reflections on the Columbia University takeover by one there reflecting 40 years later: “I watched Spring ’68 from Hartley with my pacifist and proselytizing red-cross armband-wearing roommate. SDS leaders, and their commitment to Marx’s social conception of the Hegelian dialectic and Machiavellian tactics, victimized and deceived the thoughtful and well-intentioned opponents of the ludicrous war. Some overzealous cops responded with irrational brutality. My nascent notions of altruism, humanism and nonviolence became an intractable and enduring philosophy, engendered by Spring ’68’s inimical and iniquitous display of enmity. I believe this philosophy has served me well.” Philip Bunnel ‘72
Please enjoy the poems on events of interest on my twitter   account below (if you like them, retweet, and follow me) and follow my blogs. Always good, incisive and entertaining poems on my blogs—click on the links below. Go to www.alaskanpoet.blogspot.com for Ridley’s Believe It Or Not—This Day in History,  poems to inspire, touch, emote, elate and enjoy and poems on breaking news items of importance or go to  Ridley's Believe It Or Not for just This Day in History.

© April 23, 2021 Michael P. Ridley aka The Alaskanpoet
Alaskanpoet for Hire, Poems to Admire
Poet Extraordinaire, Beyond Compare
A Unique Gift, All Recipients to Receive a Lasting Gift

Posted by Michael P. Ridley aka the Alaskanpoet at 2:19 PM