US Vaccinations: As of 4/15/2021 198.3 million doses have been given, 3.35 million per day in the last week (sounds impressive but if the rate does not increase it will take us now reduced to some 3 months to have 75% of the population vaccinated which many believe is necessary to develop herd immunity. In California 24,242,205 total doses have been given (77.1% of doses received to  near the U.S. average of 77.6%), but even with the pressure of a certain recall coming endangering Newsom, California has fallen from 28th to 31st  out of the 50 states in terms of the percentage of doses administered as a percentage of doses delivered to the states and at 22.7% of its population fully vaccinated compared to the U.S. average of 23.6% has moved slightly down from 36th tied with Nevada to 38th . A long way to go to get herd immunity and lagging in terms of getting vaccines received into arms and percentage of population vaccinated compared to other states and a great reason to recall this inept and hypocritical governor.
Non CV Case News: The body cam video of Adam Toledo is grainy but it seems to show him being shot after he turned with hands up to face the officer that shot him and surveillance video shows what looks like a throwing motion where a gun was found 2 ½ minutes after the shooting (Toledo ignored repeated calls to stop and the adrenaline rush must have been pumping in the split second he shot Toledo and he may face criminal charges but none of this would have happened if Toledo had not run and had not refused to stop earlier); maybe in a symbiotic effect with the release of the CPD’s release of the body cam views of Adam Toledo being killing by the police in Chicago, 1000 rioters assembled in Spencer Center to throw projectiles and shine laser lights at police in a 5th night of chaos; Sgt Pentland was  captured on video pushing a black to leave the neighborhood was charged with 3rd degree assault and released only to find his home was surrounded by BLM protestors and vandalized; in Indianapolis reports of a mass shooting with multiple victims at a FedEx facility there; San Antonio Police responded to a shots fired call in the San Antonio International Garage and killed the shooter.
On the censorship front Facebook has censored a New York Post on Marxist BLM founder Patrisse Khan-Cullers’ $1.4 million purchase of another house, this one in a lily white neighborhood near Malibu; Chelsea Clinton whose only claim to fame is her last name should know better as she called Facebook and wanted Tucker Carlson’s show censored for the crime of raising the question of why vaccinated people have to wear masks (and obvious question that is eminently reasonable); Biden must think he can get COVID-19 from bodies buried under 6 feet of earth as he visits Arlington with not another soul in site wearing a mask; Twitter is back to its despicable hiding behind algorithms censorship, suspending James O’Keefe, the founder of Veritas, permanently for his secret recording of Charles Chester bragging about the role of CNN to prevent Trump from being reelected (instead of Cack News Network maybe a name change to Cack Propaganda Network would be warranted); Don Lemon justified the off the cliff drop in his and his cohorts ratings that it was worth it in getting rid of Trump; Harris who remains MIA from any press conference to reveal her plans as “Immigration Czar” has finally revealed the  obvious that improving the impetus to leave Central America to come to America is going to take a long time (add and a lot of money).
Backers of a recall effort for L.A. DA Gascon have formally started the process and have started the 160 day clock to obtain 580,000 signatures of registered voters to place a recall on the ballot https://recallgeorgegascon.com/; as Harris apes “Where’s Waldo” leave it to the political cartoonist to point out despite Harris’s mocking laughter, the border crisis is no laughing matter: 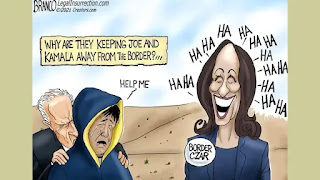 Chicago Gun Violence: HeyJackass.com is back to show that through April 15, 2021, gun violence involving mostly persons of color shooting persons of color in Chicago is alive and well with 903 persons shot of whom 163 have died.

As always, I hope you enjoy today’s holidays and observances, factoids of interest for this day in history, a musical link to “Happy Together” by The Turtles, that you are not a recreant person and a quote Bernard Rush on slavery, secure in the knowledge that if you want to send a gift for any memorable events like Mother’s Day, college graduations, birthdays, weddings, or anniversaries, you know that the Alaskanpoet can provide you with a unique customized poem at a great price tailored to the event and the recipient. Please contact me for the  details on the pricing.
1. D.A.R.E. Day—created in 1983 jointly by the LAPD and the Los Angeles Unified School District to educate elementary school students about the dangerous effect of drugs and how to avoid peer pressure to experiment with drugs; given the rising drug use among teens and young adults, the programs have had a difficult time in achieving their goals, complicated by the effects of the lockdowns and school closings caused by the CV pandemic.
2. Jackie Robinson Day—commemorating since 2004 Number 42, Jackie Robinson, breaking the color barrier in MLB for the then Brooklyn Dodgers on this day in 1947.
3. 1968 Number One Song—the number 1 song in 1968 on this day with a run of 5 weeks in that position was “Honey” by Bobby Goldsboro to share number 1 status with 15 other songs that year and 9 other acts that had their first number 1 song including the first artist to be awarded it posthumously, Otis Redding.  Here is a recording by Bobby Goldsboro performing “Honey”:  https://www.youtube.com/watch?v=UKAeeGnAYBo Bobby Goldsboro started his career playing guitar for Roy Orbison from 1962 to 1964 before branching out in a solo career that produced 11 top 40 songs on the Billboard Top 100 and his “Honey” was the bestselling record in 1968. He is still with us at age 80.
4. Word of the Day—today’s word of the day is “recriminate” which means to charge one’s accuser to validate the best defense can be an offense.
5.  An Almost Forgotten True Hero—celebrating the birth on this day in 1943 of Hugh Thompson, Jr. a helicopter pilot in Vietnam who with his crew managed to end the slaughter of Vietnamese old men, women and children civilians at Mai Lai and who endured an attempt by Blue House Armed Service Committee Mendel Rivers to have him court martialed for turning his guns on American troops threatening to fire if they did not stop shooting to be awarded along with his two crew members the Army’s Soldier’s Medal, its highest honor for action not against the enemy in 1998. This true hero who had earlier served and was honorably discharged from the U.S. Navy enlisted in the Army due to the Vietnam War and flew his last helicopter flight on January 6, 2006 from throat cancer.                    On this day in:

a. 1817 Thomas Hopkins Laudet and Laurent Clerc founded in Hartford, Connecticut The American School for the Deaf.

b. 1952 in a testimony to American engineering excellence or perhaps unwillingness to spend money on stealth bombers to carry nuclear warheads, the B-52 made its maiden flight and is still in service today able to deliver 26 tons of high explosive conventional bombs.
c. 1960 Elia Baker at Shaw University founded the Student Nonviolent Committee, one of the principal groups in the Civil Rights Movement until its dissolution in 1975.
d. 2013 two pressure cooker bombs planted by Islamic terrorist brothers Dzhokhar and Tamerlan Tsarnaev exploded near the finish line of the Boston Marathon, killing 3 and wounding 224 others, 17 of whom lost limbs. Tamerlan was killed in a massive shootout with police and Dzhokhar was later captured, tried, convicted and sentenced to death which a Circuit Court overturned for failure of the judge to screen jurors’ prior knowledge and the government’s appeal is before SCOTUS and to be argued during the 2020-21 term amidst reports the Biden is considering an end to the federal death penalty.
e. 2019 Notre Dame Cathedral in Paris was severely damaged by fire.
Reflections on Mai Lai and Hugh Thompson, Jr.’s actions: “What a great man. There are so many people today walking around alive because of him, not only in Vietnam, but people who kept their units under control under other circumstances because they had heard his story. We may never know just how many lives he saved.” Col. Tom Kolditz, head of the Army academy's behavioral sciences and leadership department.
Please enjoy the poems on events of interest on my twitter   account below (if you like them, retweet, and follow me) and follow my blogs. Always good, incisive and entertaining poems on my blogs—click on the links below. Go to www.alaskanpoet.blogspot.com for Ridley’s Believe It Or Not—This Day in History,  poems to inspire, touch, emote, elate and enjoy and poems on breaking news items of importance or go to  Ridley's Believe It Or Not for just This Day in History.

© April 15, 2021 Michael P. Ridley aka The Alaskanpoet
Alaskanpoet for Hire, Poems to Admire
Poet Extraordinaire, Beyond Compare
A Unique Gift, All Recipients to Receive a Lasting Gift

Posted by Michael P. Ridley aka the Alaskanpoet at 4:55 PM