February 22, 2022 Ridley's Believe It Or Not National Supermarket Employees Day

CV World Cases: The planet continues on an increasing basis with cases now over 428 million at 428,281,074 cases,  66,039,924 of which are active, 362,241,150  closed with 356,315,667 recoveries (98.36%), and passing the 5,900,000 barrier 5,925,483 deaths (1.64% )to continue the low trend of increased cases with increased recovery percentages and decreased death percentages with some plateaus, dips, and rises.
CV USA Cases: Total cases now passing 80 million at 80,270,563 with 27,107,363 active cases  of which 10,400  are serious or critical, (15,517 on 12/12) (back to steady decreases despite the increase in active cases due to the relative mildness of the Omicron variant) to .038 % of active cases (back to back steady decreases despite the increase in active cases due to the relative mildness of the Omicron variant  and to increase  the reduction from the 29,271 peak on 12/31/2020 to 18,871, 53,163,200 closures with 963,371 deaths (1.81%) and with 52,199,829 recoveries (98.18%). Our death rate percentage is .17%  higher than the world’s death rate.
Standing: On a deaths per million population measure on a steady but slow climb to 2883 the U.S. ranks behind Peru (6221) the new number 1 which has had a quantum leap in deaths previously unmatched which was a change in the classification to give Peru the a new method of reporting; Bulgaria (5136), Hungary (4515), Romania (3303),  Brazil (3002), and Poland (2916) and slightly higher than Argentina (2738), Columbia (2671), Belgium (2574), Italy (2545), Mexico (2413), Russia (2376), UK (2349), Chile (2142), Spain (2108), France (2095), Portugal (2059), Ecuador (1945),  Bolivia (1793),  Sweden (1656) that never closed its economy down like we did, and Switzerland (1504).
US Vaccinations: As of 02/22/22   551.0 million doses, 590,951 per day last week ( 75.5%) of population now vaccinated  with at least one shot)  and in California 91,866 per day  (which means at least 81.6% of the population of California has received at least one shot) which many believe is necessary to develop herd immunity (other than Flip Flop Fauci who may believe that 90% is required).  In California 71,204,664 total doses have been given (83.3%  of doses received to exceed the U.S. average of 80.3%), California has  moved  from 13th tied with Nevada to 11th tied with Illinois  of the 50 states in terms of the percentage of doses administered as a percentage of doses delivered to the states and at 70.2%% of its population fully vaccinated compared to the U.S. average of 64.1% and has not moved from 11th   in terms of the percentage of the population fully vaccinated compared to other states (nothing like a recall election to get Newsom’s attention and performance).
Non  CV News:  Russian troops and tanks have crossed into Ukraine with the Russian intentions of how far it intends to invade not yet known and the U.S. is supposedly rushing additional weapons to the  country, a meeting between Russia’s foreign minister and Blinken has been canceled, the proposed summit meeting between Biden and Putin has been cancelled, and Ukraine’s Foreign Minister Kubela thanked the U.S. while stating the obvious who may be emboldened to take adverse actions; NATO is warning that Russia is planning a full scale invasion of Kyiv; the U.S. Embassy has evacuated to Poland; Biden announced its vaunted ‘sanctions’ that will block the Russian government and two large institutions from Western capital markets (sadly China may not be deterred and will become Russia’s best financial friend while its balance sheet improves as oil prices climb); bad luck for helicopters continue after a crash of one killed one person in Newport Harbor, injured others in a crash in the surf off of Miami, and finally 4 were killed in a crash off Kauai; James Clapper is now bemoaning the he wished we had been more aggressive when Russia invaded the Crimea in 2014 (Obama was best known for his Syria’s line in the sand which was ignored); no police at the turnstiles in the Big Apple and the riders who get on without paying are costing the city $300 million year; rising crime and decreasing police is the perfect recipe to increase gun sales which fell by 13% over 2020 but were still up 40% over 2019; the shares of Fat Brands fell after it was disclosed that the CEO is under investigation arising out of the merger of the company with the CEO’s investment banking firm; George Gascon already in deep second recall attempt problem is under fire for his lenient sentence proposal of 2 years in a juvenile facility for a transgender pedophile who was making threatening phone calls to victims while in jail awaiting sentencing which Gascon is being accused of lying about his lack of knowledge until after sentencing; as Biden’s polling approval numbers seem to be playing the limbo game of how low they can go, leave it to the political cartoonist to portray the political blood in the water to his presidency: 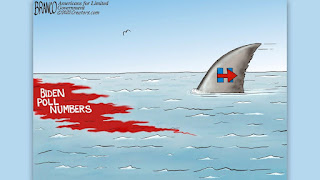 Chicago Gun Violence: Hey Jackass.com is alive and well to collect data to show that through February 21, 2022, gun violence involving mostly persons of color shooting mostly persons of color in Chicago is alive and well with 366 shot of whom 81 have died while 2021 shootings numbers compared to 2020 are 4544 to 4248 and deaths are 846 compared to 797.
As always, I hope you enjoy today’s holidays and observances, factoids of interest for this day in history, a video recording of “I Want to Hold Your Hand” by the Beatles, the fact that you are free from somatasthenia, and quote on the Beatles by Mick Jaggar, secure in the knowledge that if you want to send a gift for any memorable events like Valentine’s Day or St. Patrick’s Day, college graduations, birthdays, weddings, or anniversaries, you know that the Alaskanpoet can provide you with a unique customized poem at a great price tailored to the event and the recipient. Please contact me for details on pricing.
1.   National Supermarket Employees Day—created  by the Food Industry Association in November 2020 when the COVID pandemic was locking down and closing schools and businesses and first celebrated on this day in 2021, honoring the work of supermarket employees who masked and behind glass partitions went to work to ensure the shelves and counters were stocked and people could obtain needed food and supplies.
2.  National Margarita Day—created by Todd McCalla in the mid 2000’s in response to the low-quality fructose laden margarita mixes on shelves with this day chosen as a dreary day in February most likely ideally spruced up with a refreshing margarita with or without salt on the rim.
3.  1964  Number 1 Song—the number 1 song in 1964  on this day was  “I Want to Hold Your Hand” by the Beatles in a run at that position for 7 weeks as their first number one song of the year in which 5 others by them became Number 1 hits to join 22 other number 1 songs and 10 other acts that hit the charts at Number 1 for the first time. Here is a video of the group performing “I Want to Hold Your Hand” and kicking off Beatlemania:  https://www.youtube.com/watch?v=jenWdylTtzs
4.  Word of the Day—the word of the day is “somatasthenia” which means chronic physical weakness and fatigue which watching our president fears that he is struggling with the condition.
5.  A Cat May Have Nine Lives But Its Creator Only One—celebrating the birth on this day in 1885 of noted animator Pat Sullivan, best remembered for creating Felix the Cat but who struggled with alcoholism and died at age 47 on February 15, 1933.
On this day in:
a. 1909 after departing under orders of President Teddy Roosevelt, 16 battleships known as the ”Great White Fleet” led by the USS Connecticut returned to Hampton Roads, Virginia after having left the United States on December 16, 1907.
b. 1942 as Japanese forces were battling up the Bataan Peninsula to take Corregidor, President Roosevelt ordered MacArthur over his objections to leave the Philippines which he did on a perilous PT Boat escape to a B-17 sent to a southern island to pick him, his family and several officers and fly them to Australia.
c. 1974 Samuel Byck who planned to hijack a commercial plane and have it flown into the White House to kill Richard Nixon,  after killing a policeman at Baltimore’s International Airport, stormed the cockpit of a Delta DC-9, and when the pilot and copilot did not immediately take off shot both of them, killing the co-pilot. Police tried to prevent take off by shooting the tires with their .38’s but the bullet bounced off. Finally the stand off ended with police firing at Byck through the airplane door with a .357 Magnum taken from the dead officer, wounding him and causing him to commit suicide.
d. 1980 in what would be called the “Miracle on Ice”, the heavily favored Soviet Union Hockey Team was defeated in the semi-finals by the U.S. at the 1980 Lake Placid Winter Olympics to advance to the Gold Medal Game where they defeated Finland.
e. 1994 Aldrich Ames, a CIA analyst, and his wife were charged by the DOJ with espionage for the Soviet Union in the then largest release of classified information until FBI agent Robert Hanssen’s arrest 7 years later. Aldrich raised suspicions by he and his wife having a life style far beyond his means and after arrest the two entered a plea bargain where his wife would serve 5 years for tax evasion and he would be imprisoned for life without possibility of parole and is rotting in a medium security federal prison now 80 years old.
Reflections on the Beatles and Beatlemania: “The Beatles were so big that it’s hard for people not alive at the time to realize just how big they were. There isn’t a real comparison with anyone now. I suppose Michael Jackson at one point, but it still doesn’t seem quite the same. They were so big that to be competitive with them was impossible. I’m talking about in record sales and tours and all this. They were huge. They were bigger than Jesus!” Mick Jaggar in a December 14, 1995 interview for the Rolling Stone.
Please enjoy the poems on events of interest on my twitter account below (if you like them, retweet, and follow me) and follow my blogs. Always good, incisive and entertaining poems on my blogs—click on the links below. Go to www.alaskanpoet.blogspot.com for Ridley’s Believe It Or Not—This Day in History,  poems to inspire, touch, emote, elate and enjoy and poems on breaking news items of importance or go to  Ridley's Believe It Or Not for just This Day in History.

© February 22, 2022,  Michael P. Ridley aka The Alaskanpoet
Alaskanpoet for Hire, Poems to Admire
Poet Extraordinaire, Beyond Compare
A Unique Gift, All Recipients Receive a Lasting Lift

Posted by Michael P. Ridley aka the Alaskanpoet at 5:15 PM