February 17, 2022 Ridley's Believe It Or Not National PTA Founders' Day

CV World Cases: The planet continues on an increasing basis with cases now over 419 million at 419,526,290 cases,  70,335,935 of which are active, 349,190,655  closed with 343,315,772 recoveries (98.32%), and passing the 5,800,000 barrier 5,874,883 deaths (1.68% )to continue the low trend of increased cases with increased recovery percentages and decreased death percentages with some plateaus, dips, and rises.
CV USA Cases: Total cases now nearing 80 million at 79,826,117 with 28,020,909 active cases  of which 13,544  are serious or critical, (15,517 on 12/12) (back to steady decreases despite the increase in active cases due to the relative mildness of the Omicron variant) to .048 % of active cases (back to back steady decreases despite the increase in active cases due to the relative mildness of the Omicron variant  and to increase  the reduction from the 29,271 peak on 12/31/2020 to 15,727, 51,005,208 closures with 953,038 deaths (1.87%) and with 50,052,170 recoveries (98.13%). Our death rate percentage is .19% higher than the world’s death rate.
Standing: On a deaths per million population measure on a steady but slow climb to 2852 the U.S. ranks behind Peru (6192) the new number 1 which has had a quantum leap in deaths previously unmatched which was a change in the classification to give Peru the a new method of reporting; Bulgaria (5067), Hungary (4466), Romania (3268),  Brazil (2981), and Poland (2891) and slightly higher than Argentina (2720), Columbia (2658), Belgium (2556), Italy (2525), Mexico (2395), Russia (2350), UK (2340), Chile (2112), Spain (2089), France (2078), Portugal (2041), Ecuador (1938),  Bolivia (1789),  Sweden (1640) that never closed its economy down like we did, and Switzerland (1496).
US Vaccinations: As of 02/17/22   548.4 million doses, 416,356 per day last week ( 75.3%) of population now vaccinated  with at least one shot)  and in California 58,090 per day  (which means at least 81.3% of the population of California has received at least one shot) which many believe is necessary to develop herd immunity (other than Flip Flop Fauci who may believe that 90% is required).  In California 70,616,475 total doses have been given (83.5%  of doses received to exceed the U.S. average of 81%), California has  moved  from 13th to 14th  of the 50 states in terms of the percentage of doses administered as a percentage of doses delivered to the states and at 69.8% of its population fully vaccinated compared to the U.S. average of 63.9% and has  moved from  10th to 11th tied with Washington  in terms of the percentage of the population fully vaccinated compared to other states (nothing like a recall election to get Newsom’s attention and performance).
Non  CV News:  Flip Flop Fauci is pontificating again in a fashion that many say is contrary to the science on the virus that removing mask mandates in schools would be risky while indicating the data on the need for boosters is being monitored (has this man operating under the rightful suspicion of funding data function research at the Wuhan Lab and participating in a coverup to discredit the lab as a source of the virus passed his expiration day and with his sidekick Walensky should be removed?), WAPO was blasted for its article lambasting the only black justice on SCOTUS for ruling like white conservatives (only rags like WAPO can bleach the skin of a black with its leftist bias and turn him or her into a white suprematcist); Rep. Omar with her tweet blasting journalists for revealing names of donors to Canada’s Freedom Convoy has raised a firestorm in the MSM as journalists responded that the donor information had been revealed by a hack and the donor shutting down business was due to threats received (however the donor information was received, it should never have been released and Twitter’s vaunted algorithms should have prevented such release); Amazon has dropped BLM from its charity program not due to its Marxist bent or the fact that the alleged assassin of a Blue Louisville Mayoral candidate was bailed out by BLM but rather due to financial and reporting discrepancies; a New York Judge has ruled that Trump and his 2 children, Don, Jr. and Ivanka must testify under oath in the AG’s investigation of his business practices (a legitimate pursuit of justice or a politically motivated witch-hunt to keep Trump off the ballot in 2024?); Blinken appeared at the Security Council denouncing Russia and claiming its continued hostility to Ukraine threatens global stability while Russia seems to be playing the Nazis’ 1938 Sudetenland card by a false flag attack on 2 Russian separatist provinces in Ukraine (apprehensions over an imminent invasion tanked the market and to the bane of Russia’s economy largely dependent on petroleum production caused a drop in crude oil prices); New Mexico has joined the ranks of states accused of triage for COVID patients based on race and faces a law suit if it does not withdraw race based guidelines; the president of the SFO school board who was recalled along with 2 other members by a major landslide of voters put her head in the sand and blamed “white suprematcists”; Build Back Better is like the zombies in The Walking Dead as Schumer keeps scheming to try to sugar coat parts of it to pass as inflation fighters (lightbulb has finally been turned on by the free spending Blues to realize seats will be lost in a landslide far exceeding normal midterm losses); the automotive supply chain just got worse as a cargo ship carrying up to 4,000 vehicles including Porsches has caught fire in the Atlantic and adrift 100 miles from the Azores after its 22 crew members have been lifted off it; with crises  facing us growing like weeds leave it to the political cartoonist to portray the chaos facing the Blues: 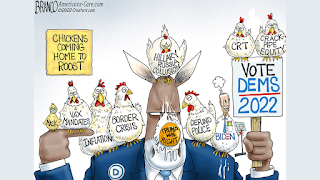 Chicago Gun Violence: Hey Jackass.com is alive and well to collect data to show  that through February 16, 2022, gun violence involving mostly persons of color shooting mostly persons of color in Chicago is alive and well with 318 shot of whom 71 have died while 2021 shootings numbers compared to 2020 are 4544 to 4248 and deaths are 846 compared to 797.
As always, I hope you enjoy today’s holidays and observances, factoids of interest for this day in history, a video recording link to “Calcutta” by Lawrence Welk, the fact that you rarely engage in soliloquy unless practicing a speech, and a quote by Anders Fogh Rasmussen on the need for the Red Cross, secure in the knowledge that if you want to send a gift for any memorable events like Valentine’s Day or St. Patrick’s Day, college graduations, birthdays, weddings, or anniversaries, you know that the Alaskanpoet can provide you with a unique customized poem at a great price tailored to the event and the recipient. Please contact me for details on pricing.
1.   National PTA Founders’ Day—celebrating the work and legacy of the founders of National Congress of Parents and Teachers by Phoebe Hearst and Alice Birney in 1897 and the founder of the National Congress of Colored Parents and Teachers by Selena Butler in 1926 which June 22, 1970 merged to become the National PTA membership in which has never been more important in dealing with school boards due to CRT and Corona Virus Mandates affecting schools as parents are struggling to force schools to stay open.
2.  National Cabbage Day—celebrating a tasty vegetable cooked or eaten raw in slaw and if you fail to celebrate it by eating servings of cabbage today not to worry as it is paired up with corned beef on March 17th.
3.  1961  Number 1 Song—the number 1 song in 1961  on this day was  “Calcutta” by Lawrence Welk on a run of 2 weeks in that position to join 21 other songs that achieved number 1 status and 15 other acts that achieved their first number one song. Here’s a recording of Lawrence Welk’s Band performing "Calcutta":  https://www.youtube.com/watch?v=-aWkhuAu8go Welk was an accordionist, bandleader and host of The Lawrence Welk Show on TV from 1951 to 1982 and whose musical style was known as “champagne music” which was corked for good on May 17, 1992 at age 89.
4.  Word of the Day—the word of the day is “soliloquy” which means talking to oneself which when not in the context of a dramatic production can be a sing of schizophrenia.
5.  Airing It Out—celebrating the birth on this day in 1963 of perhaps the greatest basketball player yet to be seen Michael Jordan who stands 5th in all-time scoring behind Kobe Bryant and tied with Wilt Chamberlain in the all-time leaders of points per game average of 30.1 and but for his two year hiatus from the sport in professional baseball would be 4th and famous for the Nike Air Jordan basketball shoes and his efforts to have popularized the sport globally.
On this day in:
a. 1863 a group of residents of Geneva formed the International Committee for the Relief to the Wounded, the precursor for the International Committee of the Red Cross.
b. 1964 SCOTUS ruled in the case of Westberry v. Sanders that Congressional Districts have to approximate the same population.
c. 1972 cumulative sales of the Volkswagen Beetle exceeded those of the Ford Model T.
d. 1980 Krzysztof Wielicki and Leszek Cichy Polish mountaineers became the first to successfully climb Mt. Everest in the winter.
e. 1996 In a great day for humans Russian Chess Master Garry Kasparov defeated IBM’s supercomputer Big Blue in a chess match.
Reflection on the need of the Red Cross in times of war or other disasters: “I condemn the entry of a Russian so-called humanitarian convoy into Ukrainian territory without the consent of the Ukrainian authorities and without any involvement of the International Committee of the Red Cross.” Anders Fogh Rasmussen, former Prime Minister of Denmark. His comments could easily apply to the Russians' aiding the separatists in the Donbas area of Ukraine.
Please enjoy the poems on events of interest on my twitter account below (if you like them, retweet, and follow me) and follow my blogs. Always good, incisive and entertaining poems on my blogs—click on the links below. Go to www.alaskanpoet.blogspot.com for Ridley’s Believe It Or Not—This Day in History,  poems to inspire, touch, emote, elate and enjoy and poems on breaking news items of importance or go to  Ridley's Believe It Or Not for just This Day in History.

© February 17, 2022,  Michael P. Ridley aka The Alaskanpoet
Alaskanpoet for Hire, Poems to Admire
Poet Extraordinaire, Beyond Compare
A Unique Gift, All Recipients Receive a Lasting Lift

Posted by Michael P. Ridley aka the Alaskanpoet at 11:56 PM