February 27, 2022 Ridley's Believe It Or Not International NGO Day

CV World Cases: The planet continues on an increasing basis with cases now over 435 million at 435,758,977 cases,  63,670,751 of which are active, 372,088,226 closed with 366,120,660 recoveries (98.40%), and passing the 5,900,000 barrier 5,967,666 deaths (1.60% )to continue the low trend of increased cases with increased recovery percentages and decreased death percentages with some plateaus, dips, and rises.
CV USA Cases: Total cases now passing 80 million at 80,567,757 with 26,401,648 active cases  of which 8279  are serious or critical, (15,517 on 12/12) (back to steady decreases despite the increase in active cases due to the relative mildness of the Omicron variant) to .031 % of active cases (back to back steady decreases despite the increase in active cases due to the relative mildness of the Omicron variant  and to increase  the reduction from the 29,271 peak on 12/31/2020 to 20,992, 54,166,109 closures with 973,119 deaths (1.80%) and with 53,092,990 recoveries (98.20%). Our death rate percentage is .20%  higher than the world’s death rate.
Standing: On a deaths per million population measure on a steady but slow climb to 2912 the U.S. ranks behind Peru (6242) the new number 1 which has had a quantum leap in deaths previously unmatched which was a change in the classification to give Peru the a new method of reporting; Bulgaria (5171), Hungary (4548), Romania (3330),  Brazil (3019), and Poland (2947) and slightly higher than Argentina (2749), Columbia (2678), Belgium (2580), Italy (2563), Mexico (2424), Russia (2403), UK (2354), Chile (2177), Spain (2125), Portugal (2073), France (2019), Ecuador (1947),  Bolivia (1795),  Sweden (1678) that never closed its economy down like we did, and Switzerland (1508).
US Vaccinations: As of 02/27/22   551.9 million doses, 434,122 per day last week ( 75.6%) of population now vaccinated  with at least one shot)  and in California 55,426 per day  (which means at least 81.7% of the population of California has received at least one shot) which many believe is necessary to develop herd immunity (other than Flip Flop Fauci who may believe that 90% is required).  In California 71,306,336 total doses have been given (83.2%  of doses received to exceed the U.S. average of 80.3%), California has  moved  from 12th to 11th  of the 50 states in terms of the percentage of doses administered as a percentage of doses delivered to the states and at 70.2%% of its population fully vaccinated compared to the U.S. average of 64.2% and has moved from 12th to 10th  in terms of the percentage of the population fully vaccinated compared to other states (nothing like a recall election to get Newsom’s attention and performance).
Non  CV News:  Watching Putin’s outbursts is causing concern over hit mental state as he has ordered his nuclear arsenal to a “combat ready state” ( sure hop the Hot Line between Moscow and the Swamp is working 24/7 glitch free); the former Miss Ukraine is aping what many Russian women did in WWII—joined the armed forces to kill the invading Germans to join Ukraine’s armed forces vowing to kill all Russians who cross the border: Biden apparently despite soaring oil prices and the Russian invasion of Ukraine still has his head in the sand calling for more renewables, still buying oil from Russia and ignoring the obvious fix—increasing domestic oil production; while the world seems to be going in a Hell and a handbasket Biden is holed up in his Delaware home most likely resting; BP which has operated with Russian interests in Russia for 30 years is severing its relationship Rosneft, a large Russian oil company; Russia’s invasion of Ukraine has finally woken up Germany which is now increasing its defense spending above 2% of its GNP; maybe the ordinary Russian is fearful of the sanctions as Japan has joined countries blocking Russia for Swift as Russians are flocking ATM’s to withdraw cash; in Minnesota, the Blues are proposing a rate hike on taxes for upper income earners which is meeting resistance which the political cartoonist so aptly portrays while inflation rages: 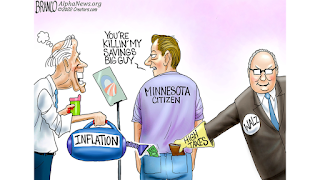 Chicago Gun Violence: Hey Jackass.com is alive and well to collect data to show that through February 25, 2022, gun violence involving mostly persons of color shooting mostly persons of color in Chicago is alive and well with 383 shot of whom 83 have died while 2021 shootings numbers compared to 2020 are 4544 to 4248 and deaths are 846 compared to 797.
As always, I hope you enjoy today’s holidays and observances, factoids of interest for this day in history, a video recording of “Everyday People” by Sly and the Family Stone; the fact that you are viewed as a sophic and a quote by George Washington on the advisability of term limits for presidents, secure in the knowledge that if you want to send a gift for any memorable events like Valentine’s Day or St. Patrick’s Day, college graduations, birthdays, weddings, or anniversaries, you know that the Alaskanpoet can provide you with a unique customized poem at a great price tailored to the event and the recipient. Please contact me for details on pricing.
1.  International NGO Day—celebrating since this day in 2014, the great work performed by nongovernmental and nonprofit organization toward the betterment of society often far more effectively and efficiently than our often-bloated government bureaucracies.
2.  No Brainer Day—created by Adrienne Sioux Koopersmith in August 1995 and first celebrated on the day in 1996 to promote the accomplishment of tasks that require little thought and are easy to perform.
3.  1969  Number 1 Song—the number 1 song in 1969  on this day was  “Everyday People” by Sly and the Family Stone  on a run in that position for 4 weeks  to join 15 other number 1 songs (2 of which were by the Beatles to equal the same number in 1968) and 7  other acts that hit the charts at Number 1 for the first time. Here is a video recording of Sly and the Family Stone performing “Everyday People”: https://www.youtube.com/watch?v=YUUhDoCx8zc. Sly and the Family Stone was a San Francisco funk, soul, rock, and psychedelic band from 1966 to 1983 and was the first major band to be racially and gender integrated.
4.  Word of the Day—the word of the day is “sophic” which means full of wisdom which is a trait rarely found in most politicians.
5.  Outrageous Luxury Is What Our Clients Want—celebrating the birth on this day in 1934 of noted French interior designer and business and life partner of Robert Denning, Vincent Fourcade who contracted AIDS and died on December 23, 1992 at age 58  while Robert lived on to die of natural causes on August 26, 2005 at age 78.
On this day in:
a. 1922 SCOTUS rejected a challenge to the 19th Amendment granting women the right to vote in the case of Leser v. Garnet.
b. 1951 The 22nd  Amendment to the Constitution limiting the presidency to two terms was ratified.
c. 1973 The American Indian Movement occupied Wounded Knee to protest federal actions against American Indians.
d. 1991 President George H.W. Bush announced that “Kuwait is liberated.”
e. 2015 Boris Nemtsov, a liberal politician and vociferous critic of Vladimir Putin was assassinated by walking on a bridge near the Kremlin in Moscow with his Ukrainian girlfriend by paid Checken assassins who failed to reveal who had hired them at a time he was criticizing Russian military involvement in Ukraine.
Reflections on limitations on presidential terms:  “Under an extended view of this part of the subject, I can see no propriety in precluding ourselves from the service of any man who on some great emergency shall be deemed universally most capable of serving the public.” George Washington in a letter to Marquis de Lafayette, April 28, 1788.
Please enjoy the poems on events of interest on my twitter account below (if you like them, retweet, and follow me) and follow my blogs. Always good, incisive and entertaining poems on my blogs—click on the links below. Go to www.alaskanpoet.blogspot.com for Ridley’s Believe It Or Not—This Day in History,  poems to inspire, touch, emote, elate and enjoy and poems on breaking news items of importance or go to  Ridley's Believe It Or Not for just This Day in History.

© February 26, 2022,  Michael P. Ridley aka The Alaskanpoet
Alaskanpoet for Hire, Poems to Admire
Poet Extraordinaire, Beyond Compare
A Unique Gift, All Recipients Receive a Lasting Lift

Posted by Michael P. Ridley aka the Alaskanpoet at 12:01 AM