February 26, 2022 Ridley's Believe It Or Not International STAND UP to Bullying Day

CV World Cases: The planet continues on an increasing basis with cases now over 433 million at 431,288,784 cases,  64,461,686 of which are active, 368,827,098 closed with 362,870,970 recoveries (98.39%), and passing the 5,900,000 barrier 5,956,108 deaths (1.61% )to continue the low trend of increased cases with increased recovery percentages and decreased death percentages with some plateaus, dips, and rises.
CV USA Cases: Total cases now passing 80 million at 80,525,369 with 26,713,037 active cases  of which 9119  are serious or critical, (15,517 on 12/12) (back to steady decreases despite the increase in active cases due to the relative mildness of the Omicron variant) to .034 % of active cases (back to back steady decreases despite the increase in active cases due to the relative mildness of the Omicron variant  and to increase  the reduction from the 29,271 peak on 12/31/2020 to 20,152, 53,812,332 closures with 971,999 deaths (1.81%) and with 52,840,333 recoveries (98.19%). Our death rate percentage is .20%  higher than the world’s death rate.
Standing: On a deaths per million population measure on a steady but slow climb to 2908 the U.S. ranks behind Peru (6229) the new number 1 which has had a quantum leap in deaths previously unmatched which was a change in the classification to give Peru the a new method of reporting; Bulgaria (5164), Hungary (4548), Romania (3321),  Brazil (3014), and Poland (2940) and slightly higher than Argentina (2745), Columbia (2675), Belgium (2579), Italy (2557), Mexico (2419), Russia (2392), UK (2356), Chile (2162), Spain (2125), France (2006), Portugal (2067), Ecuador (1948),  Bolivia (1794),  Sweden (1677) that never closed its economy down like we did, and Switzerland (1508).
US Vaccinations: As of 02/25/22   551.9 million doses, 414,200 per day last week ( 75.6%) of population now vaccinated  with at least one shot)  and in California 93,551 per day  (which means at least 81.7% of the population of California has received at least one shot) which many believe is necessary to develop herd immunity (other than Flip Flop Fauci who may believe that 90% is required).  In California 71,306,336 total doses have been given (83.2%  of doses received to exceed the U.S. average of 80.3%), California has  moved  from 13th tied with Nevada to 12th  of the 50 states in terms of the percentage of doses administered as a percentage of doses delivered to the states and at 70.2%% of its population fully vaccinated compared to the U.S. average of 64.2% and has moved from 12th to 11th  in terms of the percentage of the population fully vaccinated compared to other states (nothing like a recall election to get Newsom’s attention and performance).
Non  CV News:  Zellenskyy warns Kyiv that Russia will try to storm Kyiv tonight and the U.S. has moved to sanction Putin individually while Putin has warned Finland and Sweden they would face severe consequences if they tried to join NATO; while Biden will spend yet another weekend in Delaware and if he can remember his comments in 2019 on imagining what would happen to Ukraine if Trump were to remain in office, he must be ruing the day he made those comments; in polling voters favor Reds to Blues in generic House battles 49% to 44% and in a sign that the luster of Trump may be fading along with Biden’s luster which is for sure fading, voters are favoring a candidate supported by Trump or Biden in the primaries; Biden true to has campaign promise has nominated 2nd Circuit Court of Appeals Judge Ketanji Brown Jackson, an female African American who was a clerk for Justice Breyer and a former public defender, to be his nomination to SCOTUS; Jennifer Rubin the ultra-leftist columnist for WAPO mocked Pope Francis’ peace mission to the Russian Embassy in Rome as a worthless gesture (she was soundly mocked for her rebuke); Joy Behar revealed her elitist bearing by ranting her concern over the invasion’s effect on her planned European vacation; the Bobbsey Twins on incompetence talking on the impact of sanctions seem to not be on the same page with Biden saying they would not deter and Harris saying they were designed to do just that as so far the sanctions seem not to be addressed at curbing Russian oil exports that are fueling the invasion of the Ukraine; Time Magazine rightfully mocked for its tough Biden look cover taking on Putin but today not a whisper about the pipedream of the cover that Biden could stand up to Putin: 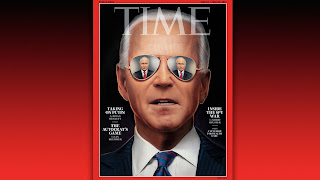 A more realistic cover based on what is transpiring in Ukraine has been provided by the political cartoonist to reveal what both men are seeing in the other’s reflection in their eyes and it is not favorable to our president: Chicago Gun Violence: Hey Jackass.com is alive and well to collect data to show that through February 24, 2022, gun violence involving mostly persons of color shooting mostly persons of color in Chicago is alive and well with 377 shot of whom 82 have died while 2021 shootings numbers compared to 2020 are 4544 to 4248 and deaths are 846 compared to 797.
As always, I hope you enjoy today’s holidays and observances, factoids of interest for this day in history, a recording of “Kind of a Drag” by The Buckinghams, the fact that Blues are sweat blood due to the latest sondages, and quotes by Albert Einstein and a response to those by Christopher Hitchens, secure in the knowledge that if you want to send a gift for any memorable events like Valentine’s Day or St. Patrick’s Day, college graduations, birthdays, weddings, or anniversaries, you know that the Alaskanpoet can provide you with a unique customized poem at a great price tailored to the event and the recipient. Please contact me for details on pricing.
1.   International STAND UP to Bullying Day—created by two Nova Scotia seniors, Travis Price and David Shephard, who witnessed a fellow student in 2007 being bullied because he was wearing a pink shirt and who then went out and purchased 50 pink shirts at a thrift shop to give to friends to wear any stand up to the bullying which they did surrounding the target in a sea of pink. It is celebrated on the last Friday in February and the third Friday in November.
2.  National Skip the Straw Day—created by the Coral Keepers a group of 9 8th grade students in Whitehall Middle School in Whitehall, Michigan and their advisor Susan Tate on February 8, 2017 and first celebrated on the last Friday of February, 2017 to not use plastic straws which foul the oceans and lakes for mammals and waterfowl or if a straw must be used make sure it is a paper one.
3.  1967  Number 1 Song—the number 1 song in 1967  on this day was  “Kind of a Drag” by The Buckinghams on a run at that position for 2 weeks  to join 18 other number 1 songs (3 of which were by the Beatles up from 2 in 1966) and 7 other acts that hit the charts at Number 1 for the first time. Here is a video recording of The Buckinghams performing “Kind of a Drag” :  https://www.youtube.com/watch?v=Hq1fpN1qWv8  The Buckinghams were a 5 man sunshine pop band that despite their name was not from England but Chicago who recorded their only 5 top 40 hits in 1967 to disband in 1970 and then reform in 1980 to start performing again.
4.  Word of the Day—the word of the day is “sondage” which means  a poll or survey where people are asked their opinions and if about the 2022 elections will probably be causing major concern and woe among Blues and pure joy and happiness among Reds.
5.  Champagne Loses Its Fizzle When the Gas Runs Out—celebrating the birth on this day in 1934 of Tony Lema, who after serving as a Marine during the Korean War became a professional golfer and who gained his nickname “Champagne Tony” by joking with a group of sportswriters covering the Orange County Open Invitational at the Mesa Verde Country Club in Costa Mesa that if he won champagne would be served which was as he won his first PGA Tournament. Unfortunately after playing in the PGA Open at Firestone in July 1966 he and his wife charter a Beechcraft Bonanza to fly them and another passenger to a charitable golf tournament only to have the plane run out of gas and crash into a water hazard at a golf course one half mile from its landing site, killing all aboard on July 24, 1966.
On this day in:
a. 1879 Hiram Rhodes Revels, a Republican, was elected to the Senate from Mississippi on straight party lines to become the first African American to be elected to the U.S. Senate.
b. 1921 Red Army forces seize control of the Georgia capital of Tbilisi after heavy fighting and declare the birthplace of Joseph Stalin the Georgian Soviet Socialist Republic.
c. 1947 in Hungary, the Soviet NKVD kidnapped Bela Kovacs, the Secretary General of the majority Smallholders Party, and spirited him to Moscow and convicted him of conspiring against the Soviet Union and sentenced him to 30 years in prison to be released and returned to Hungary in 1956 where he served as Minister of Agriculture until the government was overthrown by the Soviet’s invasion in 1956.
d. 1948 Clement Gottwald, leader of the Czech Communist Party, led a coup in Prague to overthrow the Third Czech Republic and install Communist Rule.
e. 1956 in a moment of when the cat leaves the rats come out to play, Nikita Khrushchev denounced Stalin in his Cult of Personality and It Consequences.
Reflections on Stalin: “The Russians have proved that their only aim is really the improvement of the lot of the Russian people.”  –Albert Einstein on his refusal to sign a petition in 1934 condemning alleged (and false) claims of murders of prisoners by Joseph Stalin.
“There are increasing signs the Russian trials are not faked, but that there is a plot among those who look upon Stalin as a stupid reactionary who has betrayed the ideas of the revolution.”  Albert Einstein speaking against critics of the trials of traitors within the Communist Party of the Soviet Union.
“Einstein’s only failing was an unfortunate [sic] fondness for Stalin and the Soviet Union.” — Christopher Hitchens, noted journalist and essayist who rightfully believed Einstein should have stayed in the lab of Relativity as opposed to politics.
Please enjoy the poems on events of interest on my twitter account below (if you like them, retweet, and follow me) and follow my blogs. Always good, incisive and entertaining poems on my blogs—click on the links below. Go to www.alaskanpoet.blogspot.com for Ridley’s Believe It Or Not—This Day in History,  poems to inspire, touch, emote, elate and enjoy and poems on breaking news items of importance or go to  Ridley's Believe It Or Not for just This Day in History.

© February 25, 2022,  Michael P. Ridley aka The Alaskanpoet
Alaskanpoet for Hire, Poems to Admire
Poet Extraordinaire, Beyond Compare
A Unique Gift, All Recipients Receive a Lasting Lift

Posted by Michael P. Ridley aka the Alaskanpoet at 6:02 PM