February 24, 2022 Ridley's Believe It Or Not The Great American Spit Out

CV World Cases: The planet continues on an increasing basis with cases now over 431 million at 431,654,563 cases,  64,974,666 of which are active, 366,679,597 closed with 360,732,753 recoveries (98.38%), and passing the 5,900,000 barrier 5,946,844 deaths (1.62% )to continue the low trend of increased cases with increased recovery percentages and decreased death percentages with some plateaus, dips, and rises.
CV USA Cases: Total cases now passing 80 million at 80,446,512 with 26,814,240 active cases  of which 9545  are serious or critical, (15,517 on 12/12) (back to steady decreases despite the increase in active cases due to the relative mildness of the Omicron variant) to .036 % of active cases (back to back steady decreases despite the increase in active cases due to the relative mildness of the Omicron variant  and to increase  the reduction from the 29,271 peak on 12/31/2020 to 19,726, 53,632,272 closures with 969,602 deaths (1.81%) and with 52,662,270 recoveries (98.19%). Our death rate percentage is .19%  higher than the world’s death rate.
Standing: On a deaths per million population measure on a steady but slow climb to 2901 the U.S. ranks behind Peru (6224) the new number 1 which has had a quantum leap in deaths previously unmatched which was a change in the classification to give Peru the a new method of reporting; Bulgaria (5159), Hungary (4539), Romania (3315),  Brazil (3011), and Poland (2934) and slightly higher than Argentina (2744), Columbia (2673), Belgium (2577), Italy (2553), Mexico (2416), Russia (2387), UK (2353), Chile (2156), Spain (2120), France (2003), Portugal (2064), Ecuador (1948),  Bolivia (1794),  Sweden (1656) that never closed its economy down like we did, and Switzerland (1507).
US Vaccinations: As of 02/24/22   551.9 million doses, 660,838 per day last week ( 75.6) of population now vaccinated  with at least one shot)  and in California 93,551 per day  (which means at least 81.7% of the population of California has received at least one shot) which many believe is necessary to develop herd immunity (other than Flip Flop Fauci who may believe that 90% is required).  In California 71,306,636 total doses have been given (83.2%  of doses received to exceed the U.S. average of 80.3%), California has  moved  from 13th tied with Nevada to 12th  of the 50 states in terms of the percentage of doses administered as a percentage of doses delivered to the states and at 70.2%% of its population fully vaccinated compared to the U.S. average of 64.2% and has moved from 12th to 11th  in terms of the percentage of the population fully vaccinated compared to other states (nothing like a recall election to get Newsom’s attention and performance).
Non  CV News:  Russian planes are bombing Kyiv and President Zellenskyy has announced that he is Russia’s number 1 target and his family number 2; Russian militarized forces are only 20 miles from the capital of Kyiv; NATO will be meeting to discuss the invasion and the threat posed by it and the Security Council will do likewise where Russia and China both have veto powers; the only silver lining arising out of this mess and it is a thin one given the pain and suffering the Ukrainians will have to endure is that the realization that Putin will use his energy resources as a weapon and with oil prices over $100 dollars a barrel, he is in the catbird’s seat, is that Biden will end his war on domestic energy production to lower prices and lessen his energy stranglehold on Europe (in the process we might have the bonus having the idiots that call themselves the Squad be flushed down the political toilet); in what may be a reminder that one who lives by the hacking sword can die by it as the hacking group Anonymous may have declared cyber war on Russia as several of its government sites have been shut down; as Russia is threatening disastrous consequences the world have ever seen if outside powers intervene in Ukraine, in a chilling reminder how dangerous this invasion can lead to, the French are reminding Putin that NATO allies have nuclear weapons also; as Russian planes dominate and rule the skies Zellenskyy is slamming Biden for his leading from afar (i.e. from behind); Russian propaganda is spewing out lies 24/7 trying to make the world believe it is ‘denazifying’ Ukraine and that Ukraine is the aggressor because it has been fighting with Russian separatists in Eastern Ukraine (shares of Hitler and his justification for the Sudetenland from Czechoslovakia); social media tech giants have been quick in the past to ban and censor conservative outlets and thought but much slower to ban the flow of Russian propaganda lying about the ‘aggression’ of Ukraine; Kerry our Climate Change Czar is ranting that the Russian invasion is distracting us from confronting the far more important climate change; while Biden and his minions have been touting the sanctions imposed and that they will impose, leave it to the political cartoonist to expose their deterrence effect being next to squat which unfortunate does not have sound to play Harris’ inane over her head cackle: 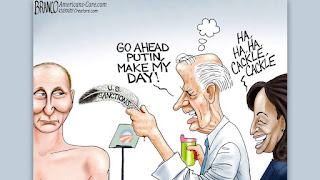 Chicago Gun Violence: Hey Jackass.com is alive and well to collect data to show that through February 23, 2022, gun violence involving mostly persons of color shooting mostly persons of color in Chicago is alive and well with 375 shot of whom 85 have died while 2021 shootings numbers compared to 2020 are 4544 to 4248 and deaths are 846 compared to 797.
As always, I hope you enjoy today’s holidays and observances, factoids of interest for this day in history, a recording of “Lightnin’ Strikes” by Lou Ritchie, the fact that you do not go through life in a somnolescent state; and quote on the Tet Offensive and why we lost the Vietnam War by Joe Barrera, secure in the knowledge that if you want to send a gift for any memorable events like Valentine’s Day or St. Patrick’s Day, college graduations, birthdays, weddings, or anniversaries, you know that the Alaskanpoet can provide you with a unique customized poem at a great price tailored to the event and the recipient. Please contact me for details on pricing.
1.   The Great American Spit Out—not sure who or when the day to promote awareness of the deadly dangers of using smokeless tobacco and urge people to “drop the dip” but the only redeeming quality of this cancerous bullet is that it lacks the secondhand smoking effects that cigarettes, cigars and pipes have.
2.  National Digital Learning Day—created by the Alliance for Education Excellence in 2012 and celebrated on the first Wednesday in February and since 2017 the third Thursday in February to promote and encourage digital learning in the classroom.
3.  1966  Number 1 Song—the number 1 song in 1966  on this day was  “Lightnin’ Strikes” by Lou Christie on a run at that position for 1 weeks  to join 26 other number 1 songs (2 of which were by the Beatles down from 5 in 1965) and 15 other acts that hit the charts at Number 1 for the first time. Here is a recording of the Lou Christie performing “https://www.youtube.com/watch?v=LyRqdzF8swY”  Luo kept performing and recording songs and albums but never achieved another number 1 hit record but is still with us at 79.
4.  Word of the Day—the word of the day is “somnolescent” which means half-asleep which sadly describes our president far too often.
5.  Comedy Found Not in Drugs—celebrating the birth on this day in 1968 of noted standup comedian Mitch Hedberg who fought stage fright, known for his one liners and admitted to recreational drug use which a mixture of heroin and cocaine killed him on March 30, 2005.
On this day in:
a. 1968 the Tet Offensive, which caught the Americans and South Vietnamese by surprise but ended up in a military disaster for the Viet Cong and NVA but a huge  political win as LBJ elected not to run for reelection and  support for the Vietnam War began to collapse in the U.S.,  finally came to an end when American and U.S. forces recaptured the citadel  of Hue captured in the early days of the Tet Offensive.
b. 1983 in a better late than never moment a commission of the U.S. Congress released a report condemning the internment of Japanese-Americans during World War II.
c. 1991 U.S. led coalition forces began crossing the Iraq border in the ground war commencement of Desert Storm which would end in 4 days with a decisive defeat of Iraqi forces.
d. 1996 2 out of the 3 Cessna 387 planes of Brothers to the Rescue flying toward Cuba to drop anti-Castro leaflets were shot down by Cuban jets in waters claimed by Cuba within its airspace and by the U.S. in international waters with the 4 aboard the 2 planes killed.
e. 2008 Fidel Castro retires as President of Cuba and from the Council of Ministers after 32 years but remains as the head of the Communist Party for another 3 years.
Reflections on the Tet Offensive: “  We won every battle in Vietnam, including Tet, but lost the war. There are reasons why we lost in Vietnam and are bogged down in our present wars: We have good motives, but our empire treads the path of older empires. We do not effectively engage the enemy. We are too road-bound, too inflexible. We build too many “mud forts.” We do not understand local cultures and alienate our friends. We dismiss nationalism, the impulse to throw out the foreign invader and recover past glories. Nationalism inspired by religion is what motivates our present enemies. It’s almost impossible to stamp out, and now it has terrible forms–the Taliban and the horribly twisted ISIS.” Joe Barrera, Ph.D., is the former director of the Ethnic Studies Program at UCCS, and a combat veteran of the Vietnam War.
Please enjoy the poems on events of interest on my twitter account below (if you like them, retweet, and follow me) and follow my blogs. Always good, incisive and entertaining poems on my blogs—click on the links below. Go to www.alaskanpoet.blogspot.com for Ridley’s Believe It Or Not—This Day in History,  poems to inspire, touch, emote, elate and enjoy and poems on breaking news items of importance or go to  Ridley's Believe It Or Not for just This Day in History.

© February 24, 2022,  Michael P. Ridley aka The Alaskanpoet
Alaskanpoet for Hire, Poems to Admire
Poet Extraordinaire, Beyond Compare
A Unique Gift, All Recipients Receive a Lasting Lift

Posted by Michael P. Ridley aka the Alaskanpoet at 12:28 PM